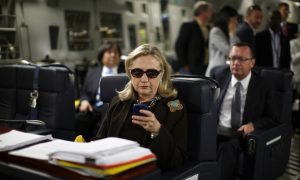 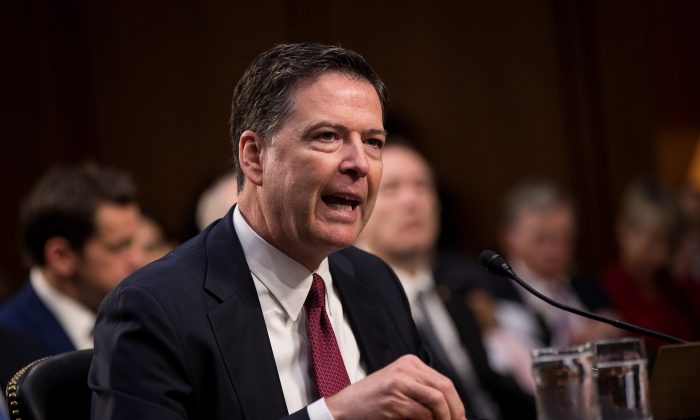 ‘I Have No Idea What He’s Talking About:’ Comey Responds to Barr’s ‘Spying’ Allegation

James Comey, the fired former director of the FBI, said he has no idea what Attorney General William Barr was talking about when Barr alleged that spying occurred on Trump’s campaign in 2016.

He made the comment during the Hewlett Foundation’s Verify Conference on Thursday, April 11.

“I have no idea what he’s talking about, so it’s hard for me to comment,” Comey reportedly said in response to a question at the event. “Maybe the only thing I can say generally is—I think that his career has earned him the presumption that he will be one of the rare Cabinet members who will stand up for things like truth and facts, and institutional values.”

In a video clip on Twitter, Comey claimed that what the FBI and the Department of Justice (DOJ) did was “court-ordered electronic surveillance.”

“I have never thought of that as ‘spying,'” he said.

Barr said that spying on Trump Campaign in 2016 “did occur” during an April 10 hearing before the Senate Appropriations Committee.

He also said that he wants to pull everything together from the various investigations at the Capitol and in the DOJ and see if there are any remaining questions to be addressed.

“I haven’t set up a team yet. But I do have in mind having some colleagues to help me pull all this information together and let me know whether there’s some areas that should be looked at,” he stated.

Barr clarified that he is not launching an investigation into the FBI but he thought there was probably “a failure among a group of leaders there.”

Why should Radical Left Democrats in Congress have a right to retry and examine the $35,000,000 (two years in the making) No Collusion Mueller Report, when the crime committed was by Crooked Hillary, the DNC and Dirty Cops? Attorney General Barr will make the decision!

Trump said he agreed with Barr’s testimony about spying on his campaign.

“I think what he said was absolutely true. There was absolutely spying into my campaign,” Trump told reporters at the White House on April 11. “I’ll go a step further. In my opinion, there was illegal spying, unprecedented spying. And something that should never be allowed to happen in our country again.”

Trump made the initial claim more than two years ago that his campaign was spied on by the Obama administration. At the time, little evidence was available to back up the president’s claim, but investigations by Republicans in Congress have established that the FBI surveilled at least one Trump campaign associate.

Clapper has now admitted that there was Spying in my campaign. Large dollars were paid to the Spy, far beyond normal. Starting to look like one of the biggest political scandals in U.S. history. SPYGATE – a terrible thing!

Barr is the first DOJ official to acknowledge that the Trump campaign was the target of a spying operation. Considering his position as the nation’s top prosecutor, the testimony marks a major turning point for both the public’s perception of the matter and the legal consequences for those involved, The Epoch Times reported.

During the 2016 elections, officials in the #Obama admin, including cabinet-level officials, extensively spied on the campaign of then-candidate Trump.

So far, at least 5 different ways officials spied on the Trump campaign have been uncovered. (Thread 👇)https://t.co/GlWjujdmuw

According to the media outlet, evidence suggests that Obama officials used at least five methods to spy on the campaign.