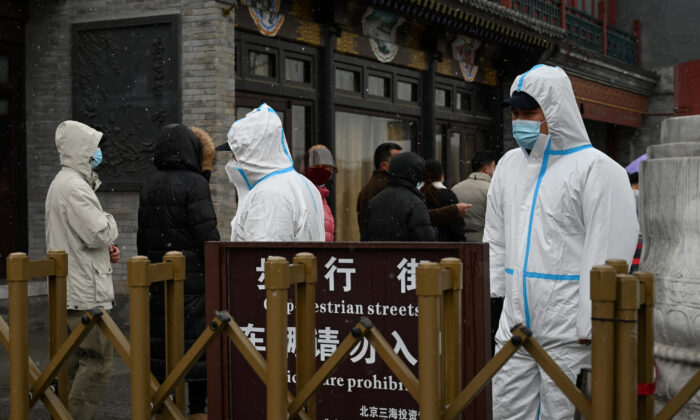 People queue to get a swab test for the Covid-19 coronavirus in Beijing on March 17, 2022. (Noel Celis/AFP via Getty Images)
By Eva Fu

On a road damp with rain, in front of a neighborhood officials’ office in the Chinese metropolis of Shanghai, a kneeling woman’s heart-wrenching pleas for her dying husband tore through the frigid air.

Wearing a khaki jacket and black pants, she was in a kowtow position on the ground, heedless of the cold and wet. She repeatedly bent her head so low that it nearly touched the cement.

The woman’s husband was suffering from late-stage cancer. But no ambulance could be made available to ferry him to the hospital, nor would any medical facilities take him—for the sole reason that the couple lived in a residential compound that had been sealed off under the Chinese regime’s “zero tolerance” virus policy.

Three months after a Chinese city became the center of an online storm for its draconian lockdowns that delayed much needed medical care for the sick and caused several pregnant women to lose their unborn children, similar scenes of helplessness are emerging on the Chinese internet as the country faces its purported worst COVID wave since its first emergence two years ago.

China is now reporting thousands of cases daily, an explosive growth compared to the clusters of infections in the double-digits it had recorded throughout 2021. But even this is likely to be an understatement, according to some experts and locals, given the communist regime’s practice of suppressing information that undermines its image. Infections are now recorded in every province, prompting a chain of responses from the Party bureaucracy as part of its “dynamic COVID-zero” policy: sacking local officials, mass testing, locking down cities, and quarantining anyone deemed a close COVID contact.

One factor that has consistently been overlooked in this playbook has been the human toll.

On March 11, the same day Changchun, the capital of northeast China’s Jilin Province, went into lockdown, a 4-year-old girl died of acute laryngitis while awaiting treatment that had been delayed due to the family of four being unable to present proof that all of them were virus-free.

On March 19, the city began a three-day testing drive of its 4.5 million residents that would also bar anyone, with the exception of medical workers, from leaving their respective compounds.

“The government seems to be treating this as a joke. They make announcements out of the blue without knowing what the next step will be,” Qin Jun, a local Changchun resident, told The Epoch Times.

In the Nanshan district of Shenzhen, the technology hub of southern China, a man in his 30s died following weeks of lockdown, according to his next-door neighbor. The timing and cause of his death were unknown. The residents only realized something was wrong after detecting a foul smell coming out of his apartment.

“No one knows how he died. Some say he starved to death. Others say he took his own life,” Lin Nan (pseudonym) told The Epoch Times.

She said that one man living in the same building had attempted suicide but was stopped by people nearby.

One health worker had told the residents, while conducting virus testing one morning, that they deserved to be sealed inside and that they’d “better not get out for several months or even a year,” she said. In response, furious residents knocked over a checkpoint booth and metal fences that separated the compound from the outside world, and asked district officials to lift the lockdown.

The protesting residents disbanded in the evening after three police vans arrived to break up the mob. The local Chinese Communist Party secretary, who had avoided meeting with them earlier in the day, also appeared then, threatening to have them all arrested if they continued to “clamor,” Lin said.

The Epoch Times couldn’t reach the district’s neighborhood office by phone on March 24.

“I just want to ask, ‘When will the lockdown end?’ Lin said.

Amid the rise in complaints, the regime has reacted aggressively to punish anyone who disobeys its rules.

China’s capital Beijing has prosecuted nearly 150 people since March 7 over COVID-related violations such as failing to scan their health code on their mobile app, entering the city by climbing fences or using fake virus testing results.

Meanwhile, the Chinese censors have continued to monitor the internet space in real time to suppress any information it deems harmful to the outbreak control efforts, including, at times, appeals for help from citizens under lockdown.

Lin, of Shenzhen, is concerned about her two young children, one is three months old and the other just over 1. Local authorities have only sent food supplies five times since Feb. 23, when the district enforced the lockdown, she said. In one batch, they received a box containing six packets of instant noodles, which was barely enough for her family of seven.

The local officers had rejected her request for something more nutritious, such as meat, saying they had “no time.”

Lin’s 1-year-old weighed about 22 pounds before the lockdown. Now the child’s only 18 pounds.

The toddler has “thinned so much,” said Lin.

Further north, lockdown fears in Shanghai have prompted a new wave of panic buying both online and in stores. A viral video on social media purportedly shows a hoard of locals emptying baskets of fresh produce from local grocery markets at close to midnight. Some tech savvy young people, meanwhile, wait past midnight to snap up orders on stores’ online apps, which often go out of stock within seconds.

Shanghai has denied having a lockdown in place despite recently turning out tenants under short notice in order to convert their apartments into quarantine hotels.

As of Thursday, 39 hospitals have shut down some operations to “cooperate with outbreak investigation,” according to the city’s health officials.

A video recently circulating on the Chinese internet showed people clad in white hazmat suits screwing shut an apartment door before sealing it with metal wires, while two men stood watching inside.

China Locks Down 51 Million as COVID Surges Across the Country

It remains a question how long the regime will continue with its COVID-zero policy as it battles the high-infectious Omicron variant, when most countries have been opting to live with the virus and lifting restrictions.

While Chinese leader Xi Jinping last week called for controlling outbreaks with the “smallest cost” possible, top officials have not indicated a marked shift away from its all-out containment methods.

“The battle is tough,” he wrote on his personal Weibo, a popular Chinese microblogging site. While largely toeing the official line, he conceded controlling the outbreak to be “a long term process.”

“We can’t have the mindset of killing the virus no matter if we can live or not,” he said. “Life has to go on.”