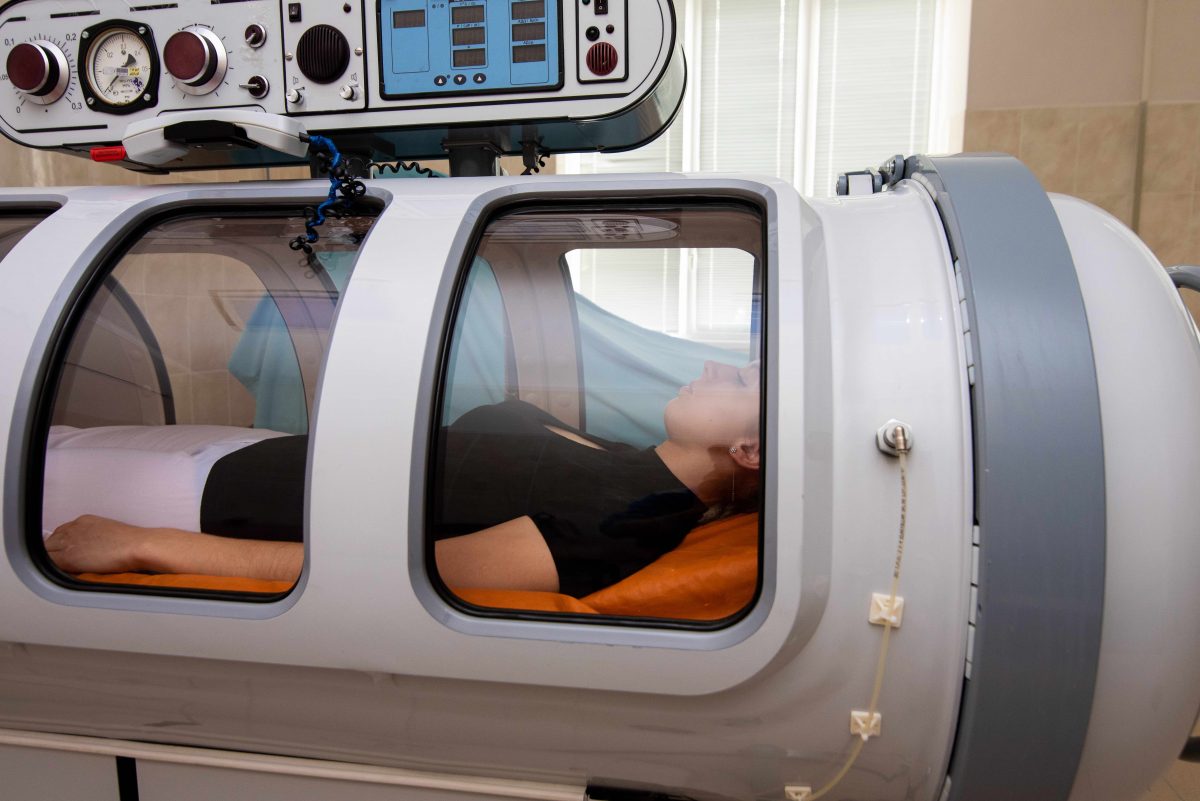 Hyperbaric chambers allow those inside to absorb oxygen directly into the plasma and tissue of the body
BY Joseph Mercola TIMEJanuary 4, 2021 PRINT

Hyperbaric oxygen treatment may be a practical method for slowing down the hands of time, suggests research from Tel Aviv University and the Shamir Medical Center in Israel published in the journal Aging.

At its foundation, aging represents a progressive loss of physiological capacity due to biological deterioration. This leads to impaired functions and increased vulnerability to diseases, including cancer, heart disease, diabetes, Alzheimer’s disease, and others. Hyperbaric oxygen treatment (HBOT), the Aging study suggests, may target two key cellular hallmarks of aging—shortening of telomeres and cellular senescence.

Telomeres are repetitive nucleotide sequences at the end of each chromosome. Sometimes compared to the plastic tip on a shoelace, telomeres help protect DNA by preserving chromosome stability and preventing chromosomes from interacting with neighboring chromosomes.

Cellular senescence is when your cells don’t want to grow and divide anymore because of DNA damage, like shortened telomeres.

The research team has been exploring the benefits high-pressure oxygen therapies at different concentrations inside a pressure chamber for years, with studies showing such treatments improved stroke, brain injury, and lowered brain function caused by aging.

The current study looked at hyperbaric oxygen treatment on healthy adults aged 64 and over to determine its effects on the normal aging process at a cellular level.

Thirty-five subjects were exposed to a series of 60 hyperbaric oxygen sessions over a 90-day period. Blood samples, which were analyzed for immune cells, were collected before, during, and after the treatments. Two exciting results were found.

The first was that telomeres at the end of chromosomes grew longer instead of shorter, at a rate of 20 percent to 38 percent depending on the type of cell.

The second was that the amount of senescent cells decreased significantly, by 11 percent to 37 percent depending on cell type.

“Today telomere shortening is considered the ‘Holy Grail’ of the biology of aging. Researchers around the world are trying to develop pharmacological and environmental interventions that enable telomere elongation. Our HBOT protocol was able to achieve this, proving that the aging process can in fact be reversed at the basic cellular-molecular level.”

Evidence suggests telomere length may predict morbidity and mortality, with shorter telomeres linked to an increased risk of premature death, but the link is controversial.

“This uncertainty is actually due to a kaleidoscope of biological and technical factors, including preanalytical issues (e.g., sample matrix), poor standardization of techniques used for their assessment, and dependence of telomere structure upon genetics, epigenetics, environment and behavioral attitudes, which may be present at a variable extent in various physiological or pathological conditions,” researchers wrote in the Annals of Translational Medicine in 2018.

Still, despite the controversy, telomere shortening has been associated with a 23 percent higher risk of all-cause death, along with an increased risk of certain cancers, including glioma, neuroblastoma, ovarian, endometrial, lung, kidney, bladder, skin, and testicular.
Dr. Amir Hadanny, chief medical research officer of the Sagol Center for Hyperbaric Medicine and Research at the Shamir Medical Center, an author of the featured 2020 study, added that lifestyle modifications and intense exercise have previously been found to slow telomere shortening, but HBOT appears to be another viable option:

“In our study, only three months of HBOT were able to elongate telomeres at rates far beyond any currently available interventions or lifestyle modifications. With this pioneering study, we have opened a door for further research on the cellular impact of HBOT and its potential for reversing the aging process.”

Cellular senescence is also known to play a role in cellular aging, and the accumulation of senescent cells is believed to be an integral part of the aging process, even potentially acting as a causal factor in age-related disease.

Research is underway to develop therapeutic strategies to interfere with cellular senescence, including eliminating senescent cells. HBOT has emerged as one potential strategy.

Not Necessarily a Clear-Cut Fountain of Youth

It’s important to take the study’s limitations into account when evaluating whether HBOT is truly a fountain of youth, as the researchers imply. It was a small study, which means the results should be replicated in a larger sample of subjects.

Also, as mentioned, the use of telomere length as a marker for aging is in itself controversial. The study also measured telomere length on immune cells called T cells, which may fluctuate depending on a number of environmental conditions, such as exercise.

It’s a positive sign that HBOT also decreased cellular senescence in T cells, but as noted by Steve Hill, who serves on the board of directors for LEAF, a nonprofit promoting increased healthy human lifespan:

“The problem with interpreting these results as rejuvenation or age reversal is that T cells are a poor choice of cell type to use for this kind of thing due to their highly dynamic nature. Unfortunately, they are a popular cell type to use in these sorts of studies, due to the ease of collection from the bloodstream.

“These particular immune cells can have large variance in their telomere length based on the demand for cellular replication at that particular time.

“T cell populations replicate rapidly in the face of pathogens, and with each replication, the telomeres shorten, meaning that telomere lengths can vary in these cell populations from day to day. Infection and other environmental factors can play a key role in the status of T cell telomeres, and this is why they are not overly useful as aging biomarkers.”

This isn’t to say that HBOT isn’t useful, as other experts agree HBOT can have significant benefits for longevity. One of the reasons I’m fascinated by HBOT, in particular, is because of research demonstrating its ability to improve mitochondrial function. However, it should be viewed as one component of healthy aging, not necessarily a magic bullet that will stop it in its tracks.

How Does Hyperbaric Oxygen Therapy Work?

HBOT has long been used as a treatment for decompression sickness that can occur among scuba divers. When you sit in a hyperbaric oxygen therapy chamber, you breathe air that has 2 to 3 times greater air pressure than normal, which allows your lungs to absorb more oxygen.

This, in turn, increases the amount of oxygen in your blood, which is transported throughout your body, fighting pathogenic bacteria and stimulating the release of healing growth factors and stem cells.

Dr. Jason Sonners, a chiropractor who has worked with HBOT for more than 12 years, explains that oxygen can be viewed as a nutrient. Your body needs it to carry out its regular functions and, when tissue is injured, it needs even more oxygen for healing.

“Two main laws govern how that works: Boyle’s Law and Henry’s Law. Basically, as you take a gas and exert pressure on it, you make the size of that gas take up less space. As a result of that pressure, you can then dissolve that gas into a liquid.

“In the hyperbaric version of that, we’re using oxygen, and the can is the chamber. But as a result of dumping excess oxygen inside that chamber, you can dissolve that into the liquid of your body … directly into the tissue and the plasma of your blood.

HBOT can be used to help speed healing of any inflammatory condition, and it’s known to facilitate wound healing and cell survival.
A small study involving 10 healthy men also revealed that a single 45-minute HBOT session reduced levels of metabolic stress-related biomarkers, including attenuating mitochondrial and oxidative stresses and relieving metabolic burdens, which suggests it may be useful for treating metabolic diseases.

In the United States, there are only 14 conditions for which insurance will pay for HBOT, whereas there are up to 100 approved indications for HBOT internationally, according to Sonners.

From my perspective, it’s medically reprehensible and inexcusable for a doctor to not treat patients with diabetic neuropathy, infections in the distal extremities, or peripheral vascular disease with HBOT, as it will in most cases prevent the need for amputation. Other conditions that may benefit from HBOT include:

Researchers are also looking at HBOT in cancer treatments in a number of different ways. For example, using HBOT may allow you to use less radiation or chemotherapy and still get the same outcome. Or, it may allow the patient to tolerate higher amounts of radiation by speeding the healing between sessions.

Typically, hospitals will only provide HBOT if you have one of the 14 approved indications. If you’re interested in HBOT for other medical or longevity purposes, you’ll need to look into the private sector for treatment. The International Hyperbaric Association (IHA) and Hyperbaric Medical International (HMI) are two organizations that may direct you to more local centers.

You can also learn more on HBOTusa.com which is Sonner’s primary education website where you can find a list of treated conditions, research, the benefits of HBOT in athletics, testimonials, and much more.