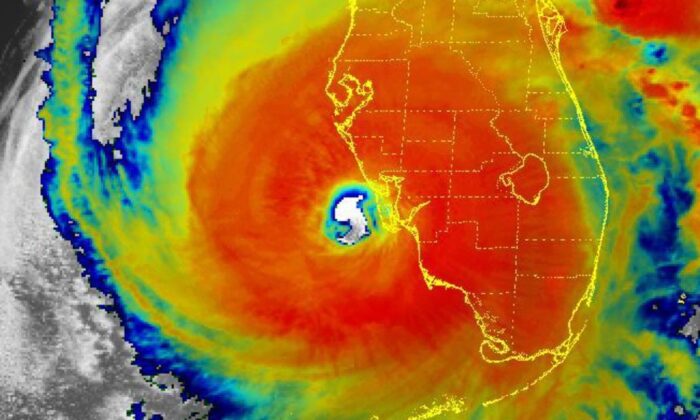 Update: Hurricane Ian has weakened further to a Category 1 system with top sustained wind speeds of 90 mph, hours after it made landfall over the west coast of Florida Wednesday afternoon as a Category 4.

The National Hurricane Center said in an 11 p.m. update that Ian continues to batter the Florida Peninsula with storm surges, wind, and flooding as it moves north-northeast at around 8 mph. Ian is forecast to weaken further in the next day or so.

The system is expected to move across central Florida overnight and Thursday morning and emerge over the western Atlantic at near-hurricane strength by late Thursday, before approaching the northeastern Florida, Georgia, and South Carolina coasts.

Earlier, Ian made landfall over the west coast of Florida Wednesday afternoon as a Category 4 system, according to the National Hurricane Center.

“NOAA Doppler radar imagery indicates that the eye of Ian made landfall along the southwestern coast of Florida near Cayo Costa around” 3:05 p.m. ET, the NHC said. The storm has 150 mph winds, a slight decline from the 155 mph winds at its peak, according to the agency.

The storm’s center is located between Fort Meyers and Venice Beach on the state’s Gulf Coast. It’s expected to carve a swath northeast through central Florida before being downgraded to a tropical storm.

Over 680,000 customers are without power in Florida because of Hurricane Ian, according to the monitoring website PowerOutage.us. Most outages are being reported in Lee, Collier, Manatee, and Sarasota countries.

In the path of the storm is Cape Coral. Mayor John Gunter told CNN that conditions in his area are quickly deteriorating as of around 12 p.m. ET and noted catastrophic storm surge is incoming.

“I was outside about 45 minutes ago and the winds have picked up, very high winds,” he said. “We know that it’s going to continue to increase, we’re well over tropical storm winds. It’s raining extremely hard. So, the conditions are definitely getting worse.”

Sarasota Mayor Erik Arroyo told CNN that his city is withdrawing its police officers from the streets due to hazardous conditions brought by Ian.

“We just made the decision just now to withdraw all of our police officers from the streets just because of the sustained wind pressure that we’ve been having,” Arroyo said.

“We would expect to see more of that inland between now and 2 o’clock, 4 o’clock this afternoon,” Desjarlais said.

Forecasters say Ian would unleash wind-driven high surf, and torrential rains that may cause coastal flooding of up to 12 feet (3.7 meters) along with intense thunderstorms and possible tornadoes. The storm’s outer bands were already bringing heavy winds and rains to much of the Gulf Coast on Wednesday morning.

“I wish this wasn’t a forecast that was about to come true. This is a storm that we will talk about for many years to come, an historic event,” said Ken Graham, director of the National Weather Service.

Earlier this week, authorities told more than 2.5 million residents to evacuate, but some, like Mark Feinman, a professional musician in St. Petersburg, chose to stay put.