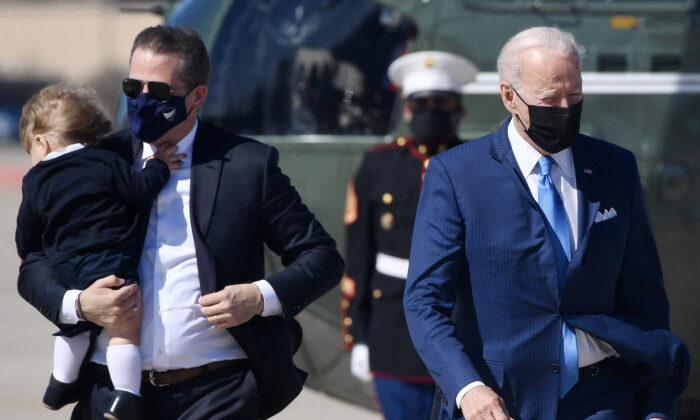 Hunter Biden, left, travels with President Joe Biden to board Air Force One at Joint Base Andrews, Md., on March 26, 2021. (Olivier Douliery/AFP via Getty Images)
Crime and Incidents

John Paul Mac Isaac, the 45-year-old former computer shop owner, filed a multimillion-dollar lawsuit in Montgomery County, Maryland, on May 3, claiming that he suffered financial and reputational damage after he was falsely accused of peddling Russian disinformation.

“After fighting to reveal the truth, all I want now is for the rest of the country to know that there was a collective and orchestrated effort by social and mainstream media to block a real story, with real consequences for the nation,” Mac Isaac told the New York Post.

It has been a year and a half since Mac Isaac closed his business after receiving death threats for providing hard drive data from the laptop abandoned by Hunter Biden to Rudy Giuliani, a lawyer at the time for President Donald Trump.

The story about emails found on the laptop was broken by the NY Post in October 2020, three weeks before the presidential election, indicating the involvement of then-presidential candidate Joe Biden, his brother James, and son Hunter in various overseas business ventures in countries such as Ukraine, Russia, and China.

However, the story was censored on social media platforms and discredited by Democrats and mainstream media as Russian disinformation.

“This was collusion led by 51 former pillars in the intelligence community and backed by words and actions of a politically motivated DOJ and FBI,” Mac Isaac added, according to the NY Post. “I want this lawsuit to reveal that collusion and more importantly, who gave the marching orders.”

Two days after revelations from the laptop surfaced among media outlets, Schiff, chairman of the House Intelligence Committee and a top Democrat, suggested that materials allegedly found on the device were a “smear from the Kremlin.”

“That’s been clear for well over a year now that they’ve been pushing this false narrative about the Vice President and his son,” he said during an interview with CNN.

“Without any intel, the head of the intel committee decided to share with CNN and its viewers a complete and utter lie,” Mac Isaac told the Post. “A lie issued in the protection of a preferred presidential candidate.”

The former business owner now claims in his lawsuit that CNN knowingly “broadcast the false and defamatory story” that was allegedly designed to influence the 2020 election.

The Daily Beast also allegedly pressed Mac Isaac with leading questions during “a hostile interview,” in addition to later referring to the laptop as stolen in two articles published in October and December.

He also accused Politico of writing an article that “knowingly falsely stated [speculation] as fact” by citing more than 50 former intelligence officials.

“The 50 former senior intelligence officials did not state that the Hunter Biden story is Russian disinformation—that was Politico,” the lawsuit reads.

Mac Isaac is now seeking “at least $1 million in compensatory damages [and] punitive damages, which will be the bigger number and will be determined at trial,” his attorney, Brian Della Rocca, told the Post.

Schiff, CNN, the Daily Beast, and Politico didn’t respond by press time to a request for comment.

Despite being financially backed by nonprofit The America Project founded by Trump loyalists, including retired Army Gen. Michael Flynn, brother Joe Flynn, and businessman Pat Byrne, according to the Post, the repairman’s livelihood has largely been disrupted since he turned in the laptop.

Mac Isaac said he had no choice but to close his computer repair store near the Biden family homes in Greenville, Delaware, as he was targeted by people who threw vegetables, eggs, and dog excrement at his store.

“The fight to get to the bottom of who told everyone this was Russian disinformation is far more important for the nation than me clearing my name,” he said.