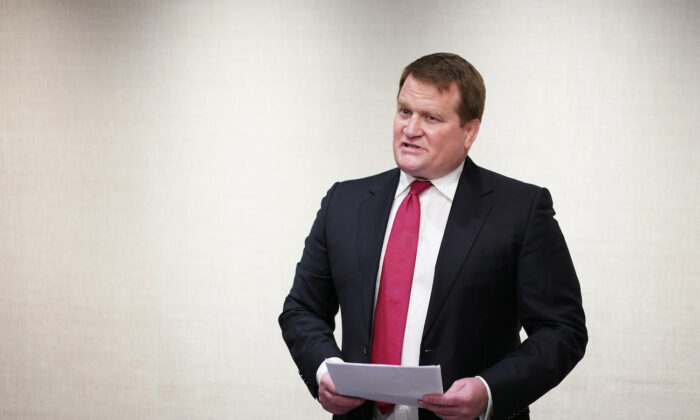 Tony Bobulinski, a former associate of Hunter Biden, speaks to reporters at a hotel in Nashville, Tenn., on Oct. 22, 2020. (Mandel Ngan/AFP via Getty Images)
By Jack Phillips

Tony Bobulinski, the former Hunter Biden associate who came forward in 2020 about messages on the younger Biden’s laptop, said the FBI never followed up with him despite promising to.

During an interview with Fox News’s Tucker Carlson on Monday, Bobulinski asserted that former FBI agent Timothy Thibault—who was accused by GOP senators of having an animus against Trump and slow-walking the Hunter Biden investigation—never got back to him when Bobulinski came forward with the information ahead of the 2020 election.

“Tim Thibault, in his last discussion with my legal counsel, said, ‘Listen, we know Tony’s cooperating. We appreciate all the information he’s provided. We will follow up with you. We are definitely going to have him come in for a follow-up interview, or spend some more time on this,’” Bobulinski told Carlson. “And I haven’t heard from him since. Nor have my lawyers.”

Bobulinski in the interview again asserted that President Joe Biden was highly involved in his son’s overseas business operations. The president has denied that he had knowledge of Hunter Biden’s finances or deals.

“There are hundreds of data points that Joe Biden was acting in—in a capitalistic term, I would say the chairman,” Bobulinski told Carlson.

In October 2020, Bobulinski came forward to the media and revealed Joe Biden’s involvement in his son’s business, including with a Chinese energy company CEFC.

In one email sourced from the infamous laptop, the elder Biden was named as the “big guy” by Hunter Biden because of the 10 percent cut he allegedly received from CEFC. Bobulinski corroborated the authenticity of those emails and messages.

Bobulinski accused the Biden family of being “compromised” by Chinese Communist Party (CCP) officials due to their business deals with individuals and companies connected to the CCP, adding that it’s impossible Joe Biden “can’t be influenced in some manner based on the history that they have with CEFC.”

In an ABC News interview in 2019, Hunter Biden acknowledged that some of his overseas deals were “poor judgment on my part.” But he stressed that he “did nothing wrong at all.”

“I gave a hook to some very unethical people to act in illegal ways to try to do some harm to my father. That’s where I made the mistake,” Hunter Biden said.

“So I take full responsibility for that. Did I do anything improper? No, not in any way. Not in any way whatsoever.”

“The chairman of JPMorgan doesn’t take eight meetings down with the people, you know, analyzing companies. The chairman serves a purpose, right? He’s a figurehead,” Bobulinski told Carlson. “He shows up in meetings, shakes hands, advises, you know, has faith in his team. Effectively, that was Joe Biden’s role in the Biden family business ventures and around the world. And not just my venture.”

Bobulinski noted that President Biden “was adamant to the American people that he had no knowledge of his family’s business deals” but asked: “How, if he had zero knowledge of that, could he be telling his son that he’s in the clear” regarding an article from the New York Times on Hunter Biden’s work with a Chinese company.

He was referring to a voicemail that Biden left his son regarding the NY Times report in 2018, telling him: “I think you’re clear.” That story delved into Hunter Biden’s deals with a Chinese oil tycoon, Ye Jianming.

In August, Thibault left the FBI following several letters sent to FBI leaders by Sens. Chuck Grassley (R-Iowa) and Ron Johnson (R-Wis.). The lawmakers have publicly accused Thibault of meddling in the Hunter Biden investigation and said that whistleblowers came forward with those claims.

“In October 2020, an avenue of additional derogatory Hunter Biden reporting was ordered closed at the direction of … Thibault,” Grassley wrote to FBI Director Christopher Wray and Attorney General Merrick Garland in July.

In a statement to The Epoch Times in late August, Thibault’s lawyers denied that he was involved in blocking the investigation into Hunter Biden and said he retired from the FBI on his own terms.

Thibault turned in his security badge and “walked with two long-time special agent friends through the field office to finish processing his paperwork,” Thibault’s lawyers said. “He walked out of the building by himself. Claims to the contrary are false.”

The Epoch Times has contacted a Thibault spokesperson and the FBI for comment.