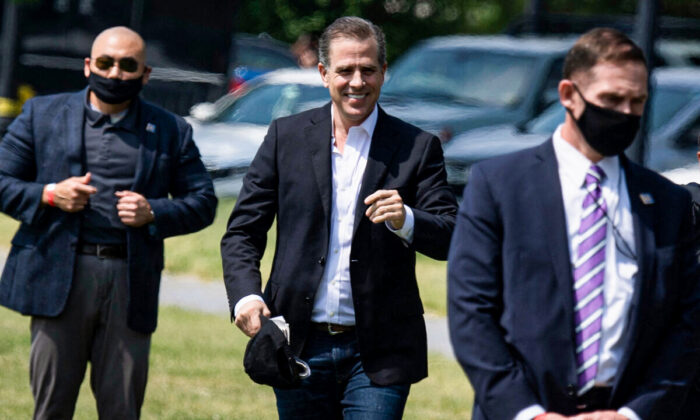 Hunter Biden walks to Marine One on the Ellipse outside the White House in Washington on May 22, 2021. (Brendan Smialowski/AFP via Getty Images)
US News

Hunter Biden held dozens of talks with his father from 2008 to 2016, often shortly after returning home from trips abroad on business, according to data from the younger Biden’s abandoned laptop.

At least 30 such talks took place, The New York Post reported on July 16, based on a personal calendar on the laptop. The meetings took place at either the White House or the vice president’s residence at the U.S. Naval Observatory.

The latest revelation comes amid President Joe Biden’s continued claim that the two have never spoken about Hunter Biden’s business dealings, which included transactions with entities and individuals in countries such as Russia and China.

One of the talks occurred in February 2012, when the young Biden met with his father at the Naval Observatory. The meeting came four days after Hunter Biden was wined and dined by billionaire oligarchs in Moscow.

In November 2015, Hunter Biden met with his father again at the Naval Observatory, two days after returning home from a trip to Romania.

On April 15, 2016, Hunter Biden met with Daniel Kablan Duncan, who was at the time the prime minister of Côte d’Ivoire. Less than an hour after the meeting, the young Biden met with his father at the Naval Observatory.

“Hardly a day goes by without another revelation about how intimately involved Joe Biden was with his son Hunter Biden’s corrupt foreign business dealings,” Stefanik said. “The fact that Joe was in meetings with senior foreign leaders on behalf of Hunter and his business associates while vice president further proves that Joe has been lying to the American people.”

“Hunter Biden should be arrested and Joe Biden impeached,” Mills wrote on Twitter.

The laptop’s calendar also showed that Eric Schwerin, the former president of Hunter Biden’s now-dissolved investment firm Rosemont Seneca Partners, was an invite recipient on 21 of the 30 meetings between Hunter Biden and his father.

In April, The Epoch Times reported that Schwerin visited the White House at least 19 times from 2009 to 2015, after reviewing White House visitor log records. One of the meetings took place in the West Wing on Nov. 17, 2010.

The Post also revealed that Hunter Biden had set up a meeting between his father and Andrés Pastrana Arango, the former president of Colombia, on March 2, 2012.

Before the March 2012 meeting, Hunter Biden and his partners at Rosemont Seneca Partners were allegedly seeking business with Brazilian construction company OAS, according to emails from the laptop, the Post reported. The Brazilian firm was interested in several projects in Columbia at the time, including a hydroelectric power plant worth $1.8 billion and a renovation project to a subway system in Bogota worth $3 billion.

“If it works, we’ll all be rich,” Schwerin wrote to Hunter Biden in an email in August 2011, according to the Post. Emails showed Hunter Biden traveling to Bogota in November 2011.

It’s unclear if OAS won any of the projects the company was interested in.

Eventually, OAS was involved in a Brazilian government corruption scandal and agreed to pay a total of 1.92 billion Brazilian reais ($461 million) by 2047 as part of a leniency deal the company signed with Brazil’s federal government in 2019, according to Reuters.

Recently, House Minority Leader Kevin McCarthy (R-Calif.), Rep. Jim Jordan (R-Ohio), and Rep. James Comer (R-Ky.) wrote an op-ed published by the Post declaring that they aim to investigate the Bidens’ business dealings if Republicans take back the House after the 2022 midterm elections.

“Contrary to Joe Biden’s statement that he never spoke to Hunter about his foreign business dealings, associates state that he was fully aware of his family’s business dealings and influence peddling,” the three lawmakers wrote. “There is evidence of a direct sum of money set aside for ‘the Big Guy’—who witnesses have identified as Joe Biden—from foreign nationals.

“A Republican majority will be committed to uncovering the facts the Democrats, Big Tech, and the legacy media have suppressed.”