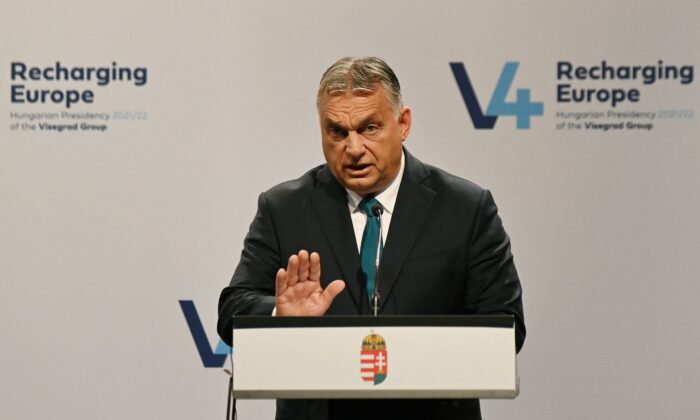 Hungary will not change its immigration laws despite a European court ruling, Prime Minister Viktor Orban said on Tuesday.

Orban said illegal immigration and LGBTQ rights, two issues that have caused conflict with the European Union, would dominate the agenda as his Fidesz party prepares for its first contested election after three landslides since 2010.

The row over democratic standards has led to a freeze in EU recovery funding to Hungary, complicating Orban’s path to re-election because the economy relies heavily on the funds to finance investment and boost growth.

The 58-year-old premier faces a united opposition as inflation hits at a 14-year-high, the economy is headed for a slowdown, and the budget deficit has surged to record levels due to high pre-election spending.

Earlier this month, Hungary’s Constitutional Court avoided ruling on the primacy of European Union law in deciding on a disputed government move against immigration, staving off a deeper crisis after a similar Polish challenge sent shock waves through Europe.

The court had considered a challenge by Orban’s government to an EU court finding that Budapest broke EU laws by deporting refugees over the border into Serbia.

The court said Budapest had the right to apply its own measures in areas where the EU has yet to take adequate steps for common implementation of EU rules as well as to safeguard its national identity, which Orban took as vindication of his policies.

“The government decided that we will not do anything to change the system of border protection,” Orban told a news conference. “We will maintain the existing regime, even if the European court ordered us to change it.

“We will not change it and will not let anyone in.”

Orban, whose anti-immigration stance boosted support for Fidesz after the 2015 migrant crisis, also said he would pursue another contested issue, a referendum on LGBTQ rights in the run-up to the election.

Orban casts himself as the defender of traditional Hungarian values against “LGBT ideology.”

In the referendum, Hungarians will be asked whether they support the holding of sexual orientation workshops in schools without parental consent and whether they believe gender reassignment procedures should be “promoted” among children.

By Gergely Szakacs and Krisztina Than