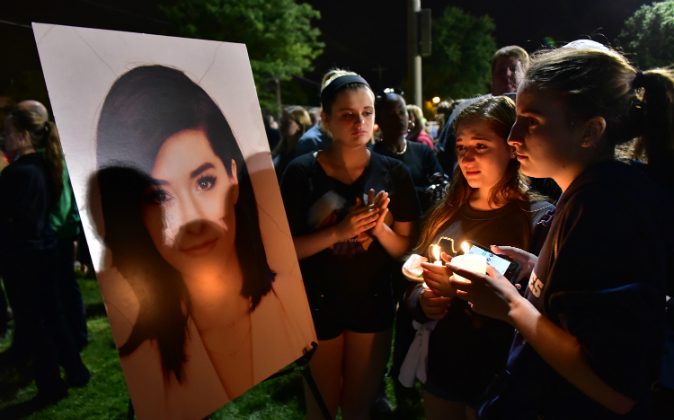 Hundreds Turn Out for Vigil to Remember Christina Grimmie

A candlelight vigil was held on the evening of June 13 in the Evesham Township’s Memorial Sports Complex for hometown singer Christina Grimmie, who was slain Friday night in Orlando.

Hundred of fans, friends, and family gathered to remember the singer, who rose to fame after placing third in NBC’s sixth season of “The Voice.”

Grimmie was gunned down by Kevin James Loibl during an autograph session after a performance at Plaza Live. Grimmie’s older brother, Marcus, tackled the gunmen before Loibl fatally shot himself.

“The tragedy that took place was at a free meet-and-greet post-show,” Marcus told the crowd. “I missed the first glimpse, but witnesses say she was arms open wide [to the shooter]. She had no idea and she treated everybody the same.”

He added, “Christina was awesome. She loved this town, this state; she loved the Lord, and she loved me.”

Evesham Mayor Randy Brown thanked the crowd for attending and urged mourners to remember Christina for the life she led and not for her senseless death.

“We want to thank every single one of you for coming out tonight and helping Marc and the whole family go through what they’re going through,” Brown said. “Tonight is not just going to be a night where we talk about Christina’s death but also celebrate her life.”

He added, “It’s every parent’s nightmare to bury a child. You can shed tears because she is gone or smile because she lived … (so) do what she would want: Smile, open your eyes, love, and live on.”

Others in attendance, including Grimmie’s aunt, Hope Compton, expressed shock over the killing.

“It doesn’t seem real,” Compton said. “But we’ll see her again in heaven.”

In the days since Grimmie’s death, a GoFundMe page created by manager, Brian Teefey (who is also Selena Gomez’s stepfather) to alleviate funeral costs, has nearly reached $150,000 in donations, and singer and former “Voice” coach for Christina, Adam Levine, offered to cover the cost of the funeral.

“Adam Levine paid for Christina’s funeral. Selena [Gomez] is singing a song and crying [during her concert]. We are blessed. She’s in a better place. Thank you to everyone once again. This is awesome,” Marcus said.