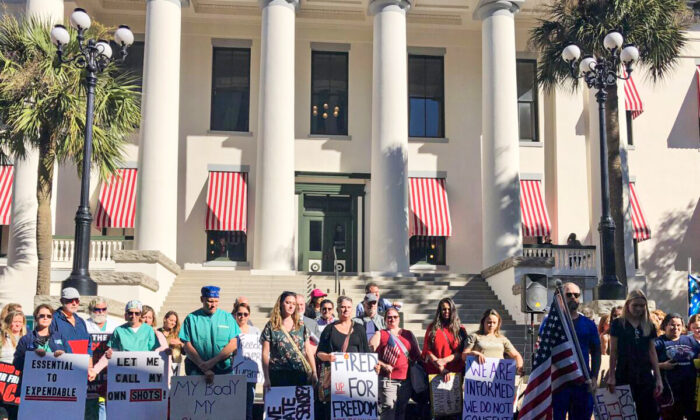 People stand in a courtyard outside the Florida Capitol on Nov. 16 to urge lawmakers to pass bills against mask and vaccine mandates. (Nanette Holt for The Epoch Times)
By Nanette Holt

TALLAHASSEE, Fla.—Hundreds of people gathered in a courtyard outside the Florida Capitol Tuesday to urge lawmakers to pass bills preventing mask mandates in the state, banning COVID-19 vaccine mandates for children, and protecting Floridians from losing their jobs for not getting the shots.

About 400 people waved signs and cheered for speakers who represented 25 allied organizations at the Rally for Medical Freedom. Buses and car caravans brought people angry about vaccine and mask mandates from across the Sunshine State.

Gov. Ron Desantis (R) had called for lawmakers to be in Tallahassee this week for a special session, urging them to pass bills that would take on a variety of issues, all related to COVID-19 mandates.

One proposed bill being considered by lawmakers would outline ways for employees to opt-out of required vaccines for COVID-19, the illness caused by the CCP (Chinese Communist Party) virus, also known as the novel coronavirus. It would require employers to grant exemptions from vaccine mandates for medical reasons, such as pregnancy or anticipated pregnancy, or for natural immunity if confirmed with a state Department of Health-approved antibody test.

The bill also would require employers to allow workers to opt out of taking the vaccine if they choose to wear personal protective equipment (PPE). Or they could opt out if they were willing to submit to periodic testing for the virus. Tests would be at no cost to the employee. The state Department of Health (DOH) would define how often the tests need to be performed.

The bill also would require employers to exempt employees who submit a DOH form explaining they have religious reasons for wanting to skip the vaccine.

“I believe the bill was drafted this way to work around the Biden mandates, in case they aren’t set aside by the courts,” attorney Jeff Childers wrote in his daily Substack blog, Coffee & Covid.  “It’s very clever.”

Childers, who operates a small law firm in Gainesville, has been taking on mask-mandate cases since mid-2020. He has organized an allied group of attorneys from around the country who share files and strategies in a growing number of cases to fight vaccine and mask mandates across the country.

Another part of the proposed legislation would ban COVID-19 vaccine mandates for students. DeSantis has repeatedly vowed that vaccines will not be imposed on children in Florida. The bill would allow parents or adult students to sue schools to enforce the law and have the opportunity to recover their attorney’s fees.

That’s huge, Childers says, because that will mean more attorneys will be willing to take on those cases, knowing that there’s a way they can be paid if they’re successful.

Another new section of law would ban vaccine mandates for all public employees.
“An educational institution or a governmental entity may not impose a COVID-19 vaccination mandate for any full-time, part-time, or contract employee,” the proposed legislation says.

All laws, rules, or policies already in place that are contrary to the new law would be nullified. And employees already terminated for refusing the vaccine could get state re-employment assistance.

Another state law would be amended to ban mask mandates in schools. Students and employees would no longer be forced to quarantine or stay home after exposure if they have no COVID-19 symptoms.  And people who have to sue to enforce these rights would be able to recover attorney’s fees and costs.

The new laws would automatically expire June 1, 2023, unless extended by the Legislature.

Childers says he hopes to encourage lawmakers to “tweak the (vaccine-related) bill by adding protection against discrimination toward uninjected employees in hiring or in the workplace.”

There’s also a bill being considered that will order the State of Florida to begin putting a new framework into place to oversee occupational safety and health, so the state can opt out of the federal oversight of OSHA. That process will take time.

But something that would take place immediately if the proposed legislation is passed and signed into law makes Childers and others rallying for medical freedom very happy. The change to existing law would remove the ability of the state health officer to mandate vaccinations.

“Even though I’ve never been super worried about this law, since it’s absolutely unconstitutional and has never been used, it has still irritated a whole lot of folks just by existing,” Childers wrote in his blog. “Good riddance.”

But some who have been strongly opposed to vaccine mandates and mask mandates aren’t happy about the proposed bundle of legislation.

They’ve asked their supporters to urge representatives to kill the bills that don’t go far enough. Instead of providing for ways for employees to opt out of vaccine mandates, they say vaccine mandates should be banned completely.

But that might not move quickly enough in the courts to help the thousands of workers who could lose their jobs if a resolution isn’t found fast, Childers says.

Stephen Davis was a battalion chief for Orange County Fire Rescue until he was fired in October for refusing to discipline employees for not getting COVID-19 vaccines.

Wearing his firefighter helmet, he told his story to the crowd on Tuesday.

Michelle Childers, with the groups Moms for Liberty Alachua and the Alliance for Responsible Government, acknowledged the dissent among some conservatives about legislation related to opting out of vaccines, instead of banning mandates. She’s the wife of Jeff Childers.

She told the crowd outside the Capitol Tuesday, “This is a good bill. It’s not a perfect bill, but it will get us some relief.”