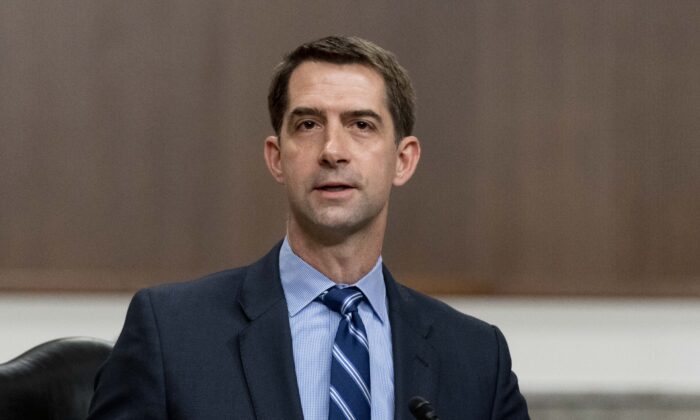 In a Senate hearing with Austin, Cotton claimed that within the military, there’s “plummeting morale, growing mistrust between races and sexes where none existed just six months ago and unexpected retirements and separations based on these trainings alone.”

One whistleblower, Cotton alleged, said that military history training was replaced with training about police brutality, “systemic racism,” and “white privilege.” Another said that his unit had to read “White Fragility” by feminist author and critical theory proponent Robin DiAngelo, according to the senator.

In May, the Space Force confirmed it relieved Lt. Col. Matthew Lohmeier, a former instructor and fighter pilot, as commander of the 11th Space Warning Squadron. While it didn’t specifically name the reason why Lohmeier was terminated, the Space Force cited comments made by Lohmeier during a podcast in which he denounced CRT and warned about the spread of Marxism within the Space Force’s ranks.

CRT, which draws heavily upon Marxist critical theory and postmodernist writers, denounces U.S. and Western culture as oppressive, and often claims American culture and institutions are promoting “systemic racism” or “white supremacy.” Some critics have said the ideology’s proponents apply the Marxist tactic of “class struggle” to drive people along the lines of gender, race, and ethnicity, rather than between the “proletariat” and “bourgeoisie.”

In the hearing, Austin told Cotton that some training is designed to make sure that the armed forces are “welcoming to everyone who can qualify and who is fit to serve.”

“We ought to look like the America we support and defend, and senior leadership should look like what’s in the ranks,” Austin said.

But Cotton suggested that claims the military is attempting to foster diversity with such training are incorrect.

“[It’s] about a very specific kind of anti-American indoctrination that is seeping into some parts of our military, based on the whistleblower complaints we have received,” he said.

“The military for decades has been one of the institutions in society where you are most likely to get ahead based on your own performance, your own merit, irrespective of the color of your skin, where you came from, who your parents were.”

“I absolutely agree with that. I am an example of that,” he said.

Austin went on to state that the military needs to be “a bit better,” be “absolutely inclusive,” and promote “equity.” The terms “inclusive” and “equity” have been used in social justice circles for years.

Austin then argued that by doing so, it’ll be the “most effective and lethal fighting force in the world.”