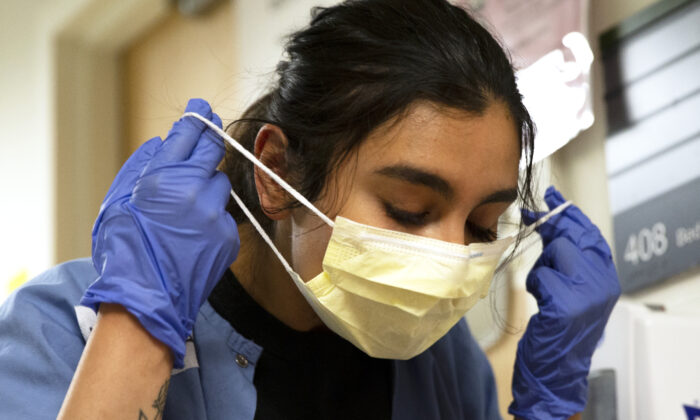 A nurse carefully removes her mask and PPE after tending to a patient with COVID-19 in the acute care COVID unit at Harborview Medical Center on May 7, 2020 in Seattle, Washington. (Karen Ducey/Getty Images)
By Isabel van Brugen

Several hundred health care workers across the state of Virginia have either lost their jobs or been suspended because they refuse to comply with mandates to get vaccinated against COVID-19.

Virginia Gov. Ralph Northam, a Democrat, joined other states including California, New York, and North Carolina in issuing a directive in August mandating the COVID-19 vaccine for most of Virginia’s state workers—a move that applied to more than 120,000 executive branch employees.

Two further vaccine mandate deadlines for major hospital systems in the state, including Sentara and UVA Health, have been set for Oct. 18 and Nov. 1, respectively.

“Anyone who is unvaccinated on Nov. 1 will face disciplinary action, including the possibility of termination,” a UVA Health statement reads.

Sentara also released a statement regarding the vaccination deadline.

“This timeline gives employees eight weeks to become fully vaccinated now that the FDA has approved at least one of the vaccines,” Sentara stated.

According to The Washington Post, rural areas of Virginia, with larger numbers of unvaccinated individuals, are seeing a higher number of health care workers either being suspended, fired, or quitting their jobs over vaccine mandates.

“In a rural hospital, it doesn’t take a whole lot of people to walk away for it to have a serious effect on your hospital,” Alan Levine, CEO of Ballad Health, told the Post. “It’s a lot easier to recruit nurses to Northern Virginia than it is to Southwest Virginia.”

Levine said he estimates that 5 to 10 percent of Ballad Health’s workforce would be lost if it were to mandate vaccines against COVID-19, the disease caused by the CCP (Chinese Communist Party) virus.

J. Stephen Jones, president and CEO of Inova, told the media outlet that its mandate is “based on very strong, extremely clear guidance on the safety and efficacy of the vaccine,” noting that the policy has helped with recruitment.

About a dozen states nationwide have enforced vaccination mandates for health care workers in hospitals, long-term care facilities, or both. While some allow exemptions on medical or religious grounds, those workers often must undergo regular COVID-19 testing.

The Biden administration also announced that about 17 million workers at health care facilities that receive federal Medicare or Medicaid will be required to be fully vaccinated against COVID-19. That rule is still being developed.