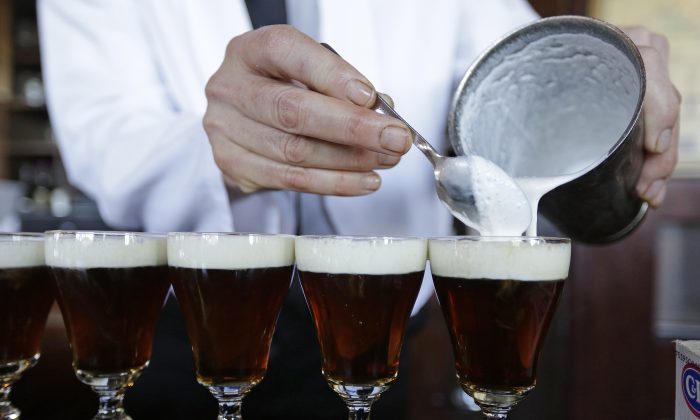 In this photo taken Tuesday, Dec. 15, 2015, bartender Paul Nolan makes Irish Coffee drinks at the Buena Vista Cafe in San Francisco. The drink has been made at the popular bar since 1952 and up to 2,000 are served a day. (AP Photo/Eric Risberg)
Northern California

A group representing nearly 500 bars in San Francisco has said that patrons who want to drink inside will have to show proof of vaccination or a negative COVID-19 test.

The San Francisco Bar Owner Alliance told NBC News that its members will begin implementing the rule on July 29. The group polled its members prior to making the announcement and 85 percent said they support the move, the network reported.

The group leaves the matter of enforcing the rule to individual owners.

“We believe we are obligated to protect our workers and their families, and to offer safe space for customers to relax and socialize,” the group said in a statement, according to NBC.

The announcement was made public the same day that California Gov. Gavin Newsom required state and healthcare employees be vaccinated or undergo weekly testing. A similar mandate is in place in New York City.

“As the state’s largest employer, we are leading by example and requiring all state and health care workers to show proof of vaccination or be tested regularly, and we are encouraging local governments and businesses to do the same,” Newsom said in a statement.

Private and government entities are grappling with the prospect of re-imposing some lockdown or other mitigation measures as cases of the CCP (Chinese Communist Party) virus are again on the rise. The CCP virus, also known as the novel coronavirus, is the pathogen that causes the COVID-19 disease.

The delta variant of the virus became dominant in the United States in early July, coinciding with early reports that the effectiveness of the Pfizer vaccine diminished over time.

More than 21 million California residents are now fully vaccinated against the CCP virus, according to data from the state.

“California has administered more vaccines than any other state, with 75 percent of those eligible having gotten at least one dose, and we were weeks ahead of meeting President Biden’s 70 percent goal,” Health and Human Services Secretary Mark Ghaly said in a statement.