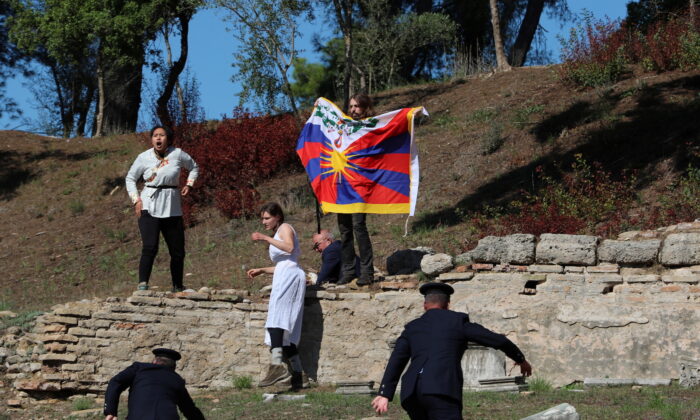 A protester holds a Tibetan flag during the Olympic flame lighting ceremony for the Beijing 2022 Winter Olympics in Ancient Olympia, Greece, on Oct. 18, 2021. (Costas Baltas/Reuters)
Europe

Three human rights activists holding a Tibetan banner that read “No genocide games” managed to sneak into the site where the Olympic flame was lit in Greece before being detained by police.

The flame was lit on Monday at the Temple of Hera in southern Greece, the birthplace of the ancient Olympics, ahead of the Beijing 2022 Winter Olympics. The event was under heavy police security as a number of protesters gathered near the event.

“How can Beijing be allowed to host the Olympics given that they are committing a genocide against the Uyghurs?” one protester said, referring to the treatment of Uyghur Muslims in China’s northwest region of Xinjiang.

Rights groups and U.S. lawmakers have called on the International Olympic Committee (IOC) to postpone or relocate the Games, saying there have been no human rights improvements in China since the 2008 Beijing Olympics.

China has repeatedly denied any mistreatment of Uyghurs and other minority groups, despite independent investigations and research confirming that the Chinese Communist Party (CCP) has orchestrated twin “crimes against humanity” in the last 20-plus years.

Two women and a man sneaked past a tight police cordon and entered the archaeological site where the Olympic flame is traditionally lit. They held up a Tibetan flag seconds after the torch was lit by an actress playing the role of a high priestess at the temple several feet away.

The three human rights protesters shouted for a boycott of the Games in Beijing but were quickly grounded and led away by police.

The Chinese capital will become the first city to host both the Winter and Summer Games when it stages the Feb. 4 to Feb. 20 event, but protests and calls for boycotts over the country’s human rights record have marred the run-up.

Activists are planning more protests and a news conference on Tuesday when the flame will be officially handed over to the Games’ organizers in Athens.

Earlier on Monday, two student activists were held in detention in Athens after protesting at the Acropolis over the weekend against the CCP’s human rights atrocities, calling for the boycott of the Beijing Winter Olympics.

UPDATE: Tsela and Joey will remain detained for the night and will appear before a Greek court tomorrow at 10:00am Athens time. pic.twitter.com/MDVw9hoU1l

The two women attempted to hang a banner in the Acropolis early on Oct. 17 to protest the upcoming Olympics in China when they were detained, prompting international human rights groups to call for their release.

“We call on the Greek authorities to resist any pressure from the Chinese government to extradite these activists, to release Joey Siu and the Tibetan activist Tsela Zoksang as a matter of urgency, and to allow them to return to the United States of America,” said UK-based advocacy group Hong Kong Watch in an Oct. 17 statement.

Both women are also members of the “No Beijing 2022” campaign which involves a coalition of Tibetan, Uyghur, Hong Kong, mainland Chinese, Taiwanese, and Mongolian human rights activists.

Rita Li and Reuters contributed to this report.