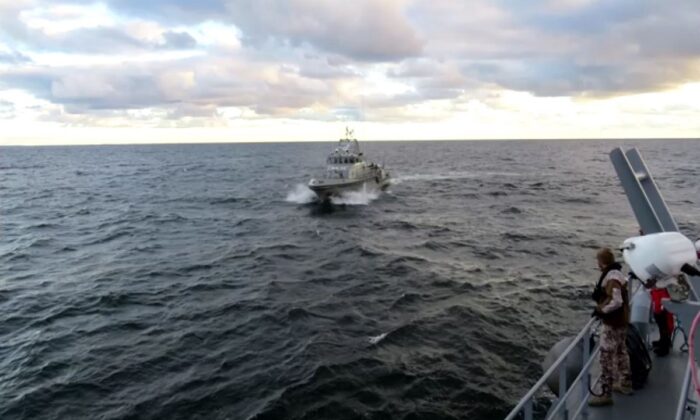 A Latvian Coast Guard ship at the crash site of a private Cessna aircraft in the Baltic Sea off the Latvian coast in a photo released on Sept. 6, 2022. (Latvian Navy Coastal Guard Service via Reuters)
Europe

HELSINKI—Human remains and debris have been found in the Baltic Sea during a search operation off Latvia’s coast where a private jet crashed in mysterious circumstances, likely killing all four occupants.

Lt. Cmdr. Peteris Subbota, head of the Latvian military’s Marine Search and Rescue Coordination Centre, told The Associated Press that “remains of human bodies we believe to be associated with the crash” were found Tuesday during the search operation by Latvian coast guard vessels and underwater robots.

Air traffic controllers on Sunday lost contact with the Cessna Citation 551 jet, carrying four people, shortly after it took off from the Spanish city of Jerez. The aircraft, en route to Cologne, Germany, had earlier reported problems with cabin pressurization.

Several European countries scrambled fighter jets as the plane made its way across the continent, but were unable to see or contact anyone in the cockpit, German media reported, prompting tabloid Bild to call the aircraft a “ghost plane.”

The Cessna disappeared from radar while it was flying off course over the Baltic Sea—apparently on autopilot—and later crashed into Latvian waters some 37 kilometers (23 miles) northwest of the port city of Ventspils.

The underwater search has not yet located the plane wreck, but Subbota said the chances of finding it should be reasonably good as the water is only up to 60 meters (197 feet) deep at the site and the seabed is accessible.

Media reports said the Austria-registered aircraft was built in 1979 and it didn’t have a so-called black box that would help determine the cause of the crash.