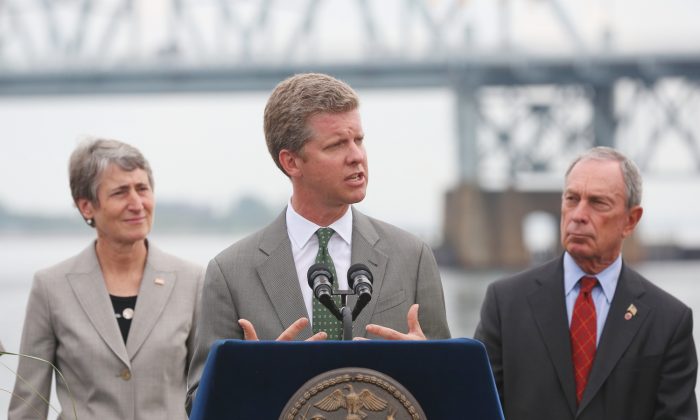 Housing and Urban Development Secretary Shaun Donovan speaks at a press conference at Riis Landing on the Rockaway Peninsula on Aug. 12. To his left is Secretary of the Interior Sally Jewell, and to his right is Mayor Michael Bloomberg. (Gary Du/Epoch Times)
New York

The new Science and Resilience Institute at Jamaica Bay will research urban ecosystems and communities to help protect areas from the extreme weather many associate with climate change.

“These innovative steps will serve as models for communities across the region and the country as they prepare for impacts of climate change and help them build in a way that makes them stronger, more economically competitive, and better able to withstand future storms,” said Donovan.

“Today’s announcements are directly in line with several of the principles at the heart of the Task Force’s work, including the emphasis on resilience, the need for a regional approach to rebuilding,” said Donovan.

The HUD Secretary had a similar message when he spoke last Thursday, Aug. 8 at an energy technology conference at New York University School of Law. There, he encouraged the energy and finance industries to work with the public sector to make regional infrastructure more resilient to flooding and extreme weather storms like Sandy. Too often, said Donovan, the focus has been to replace what was destroyed, to simply rebuild what was there before.

The combined cost of Hurricane Sandy from direct damage plus lost economic output due to power outages and physical damage is estimated at $65 billion dollars, said Donovan.

One solution being explored is microgrids. Microgrids are a way to localize power distribution and generation (such as with fuel cells, or through wind, or solar) so that it’s synchronized with conventional power plants. The grids reduce emissions by making energy production more efficient. When local energy is available, such as bright sun shining on rooftop solar cells, they make use of it. When it’s not, they draw energy from the grid. Making that switch in power sources seamless is not easy.

Because they don’t rely on a distant power source, only microgrids can reduce outages and allow for greater local control. When grid outages occur, local energy can be routed to essential needs.

Although not yet in use large scale in the U.S., the technology has gained prominence since Hurricane Sandy knocked out power for millions in the Northeast. The technology is expensive and is still being perfected. On Jul. 24 Connecticut governor Dannel Malloy announced the state will build nine microgrids at an estimated cost of $18 million. This cost does not cover the new local sources of power generation that the grids will need.

“The effects of climate change are already being felt deeply across this country,” said Donovan. He reminded the audience of President Obama’s inaugural address statement that despite disputes over climate change, “none can avoid the devastating impact of raging fires, and crippling drought, and more powerful storms.”

Shaun Donovan has been United States Secretary of Housing and Urban Development since he was appointed by Obama in January 2009. Donovan previously worked under Mayor Michael Bloomberg as commissioner of the New York City Department of Housing Preservation and Development.