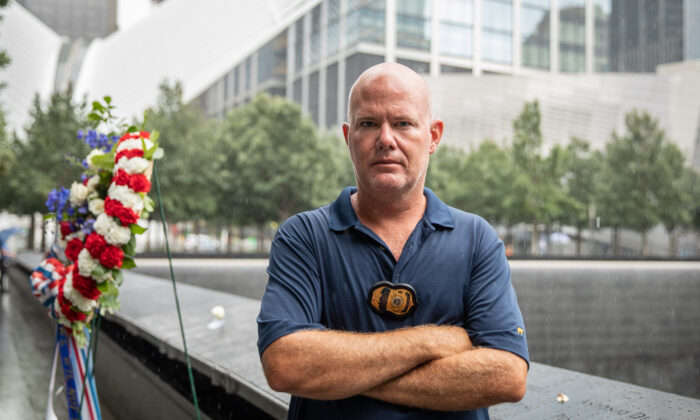 HSI Agent Reflects on 9/11: ‘I Don’t Think We Could Ever Forget’

NEW YORK—It was a cloudy afternoon in New York City when a towering man walked quietly past the 9/11 memorial on the eve of this year’s anniversary of the deadliest terrorist attack to take place on American soil.

“I don’t think we could ever forget. … We still have to keep the memory alive,” says James Deboer, a supervisory special agent for Homeland Security Investigations (HSI) who helped with the recovery efforts in the aftermath 19 years ago.

Deboer, who worked as a customs agent at Los Angeles International Airport (LAX) at the time of the attacks, remembered when he received a call from his boss to report to the airport and to “gear up.”

Deboer, who was born and raised in the borough of Brooklyn, described experiencing an agonizing morning that day as he couldn’t contact his two brothers—both of whom were New York City Police Department cops.

That afternoon, he was relieved to find out that all his family members were accounted for. Deboer then immediately volunteered to come back to the Big Apple and help with the recovery effort, which he said was a “great honor.” But not everyone was accounted for. He said he lost close friends that day.

Now, Deboer says he can’t help but feel a little sad coming to the memorial and seeing so few people here on the eve of the anniversary.

“Every year, it seems to get less and less,” he said.

Deboer critiqued the changes to this year’s ceremony, which won’t feature the usual live reading of the names of the victims due to the pandemic. The ceremony will instead feature a recording of the readout.

“I don’t think we should ever not be able to come here and read out the names, COVID or no COVID,” he said. “I think it’s important that it gets the coverage in the media so the new generations of people who weren’t alive, or who were just too young—that they don’t forget.

“It’s very important to me that we honor these people.”

It’s also important to honor those who have since died of cancer or other illnesses as a result of the attack, he says, noting that he gets his physical every year and that he’s one of the lucky ones who has stayed healthy.

Deboer recalled that in the aftermath of the attacks, there was a great sense of togetherness in New York, describing so many different agencies working together on one mission.

During his two months working at ground zero, Deboer recovered evidence and bodies. He said their efforts helped to bring closure to many families; often, however, they were only able to find a ring or wallet.

“There’s many people that weren’t able to give a proper burial to their loved ones,” he said. “That was tough.”

He said he felt a “great sense of pride” to “help get this place back up and running.”