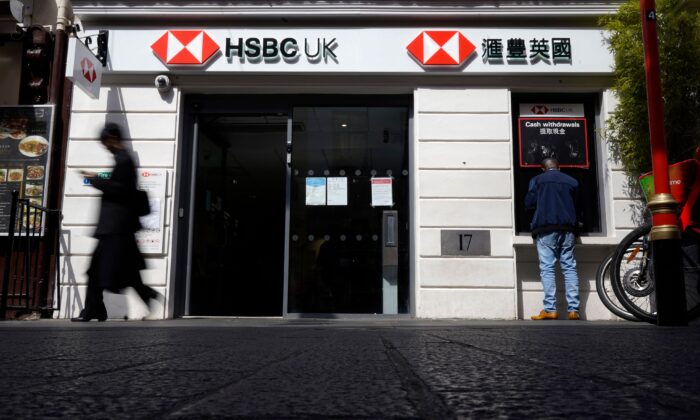 A pedestrian walks past a branch of a HSBC bank in central London on April 26, 2022. (NIKLAS HALLE'N/AFP via Getty Images)
Cancel Culture

A high-ranking HSBC executive has resigned, claiming that his position had become “unsustainable” as a result of backlash from a speech he gave last spring downplaying the financial risks of climate change.

Stuart Kirk, who was serving as HSBC Asset Management Global Head of Responsible Investment, announced his resignation in a LinkedIn post on July 7. In the post, Kirk criticized “the nonsense, hypocrisy, sloppy logic, and group-think inside the mainstream bubble of sustainable finance,” claiming the company stifled viewpoint diversity and stuck to “bonkers” ideas about sustainable investment.

Kirk went on leave from HSBC in May following an address to the FT Moral Money Summit Europe in London. In his speech, the HSBC executive downplayed the risks of climate change for investors, stating that the impacts of manmade climate change were greatly exaggerated and decades from fruition.

“There’s always some nut job telling me about the end of the world,” Kirk said in his controversial address, in which he compared climate alarmists to gold bugs and proponents of Y2K panic.

After several months on leave, and following a lengthy backlash to his remarks, Kirk evidently concluded that his position at the company was “unsustainable.” The embattled banker announced his resignation in the aforementioned LinkedIn post, in which he criticizes the dominant orthodoxy on Environmental, Social, and Corporate Governance (ESG)—an approach to investing which considers social responsibilities.

“Investing is hard. So is saving our planet. Opinions on both differ,” said Kirk in his post. “But humanity’s best chance of success is open and honest debate. If companies believe in diversity and speaking up, they need to walk the talk. A cancel culture destroys wealth and progress.”

“There is no place for virtue signaling in finance. Likewise as a writer, researcher, and investor, I know that words or trading shares can only achieve so much. True impact comes from the combination of real-world action and innovative solutions.”

Kirk’s post drew a multitude of contentious responses from numerous executives, CEOs, and other financial professionals, who argued in the comments section about the merits of Kirk’s criticisms and ESG.

“A lot of shouting on here about what ESG actually is. (It’s not virtue signaling.) EGG [sic] is a movement to place the responsibility for cost externalities back where they belong, on the shoulders of the parties that are creating the cost and profiting on the backs of those that bear the cost,” said Gordon Achterman, a Fiduciary Financial Adviser for Your Best Path, replying to Kirk’s post.

“Those who oppose ESG simply want to be allowed to do their damage in secret, and that is cronyism not capitalism.”

Despite protestations from his critics, Kirk announced that he would be working on an ambitious new project. He did not specify the details of his upcoming venture, which he calls “the greatest sustainable investment idea ever conceived,” involving the creation of “a whole new asset class.”

Kirk promised to announce the details of the mysterious project later this year.