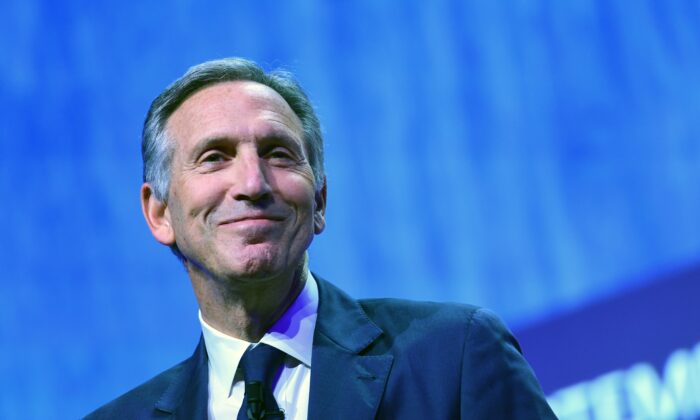 I’m one of those who doesn’t love Starbucks. I patronized them only when something I liked better, usually local, wasn’t available. Still, they were and maybe still are, an American—and an international—phenomenon.

Founder and CEO Howard Schultz figured out how to take the Greenwich Village coffeehouse of yore, clean it up, and leave just enough bohemian edge to make customers feel as if they were doing something cool by patronizing it. It worked spectacularly.

I was so impressed by the CEO’s acumen, and his seemingly sane middle-of-the-road political approach, rare to disappearing in Democrats, I even wrote somewhat favorably in January 2019 of his presidential trial balloon in “Howard Schultz Could Actually Win the Presidency.”

This article created a small brouhaha when Schultz cited it on television and then had to walk it back under left-wing pressure because I had committed the faux pas of referring to 2020 presidential candidate Sen. Elizabeth Warren (D-Mass.) as “Fauxcahontas” in the text. The controversy even made the Daily Mail.

He obviously pulled out of his presidential adventure, but now he’s pulling out of something that I suspect is ultimately dearer to him.

He’s closing some of his coffee shops across the country because of the amount of violence and destruction taking place inside them, including the risk to his employees who could no longer tolerate that and told him so. They’re frightened.

You could almost say these Starbucks closings, like their coffee or not, are weirdly symbolic of the decline of our civilization. So many things are closing or aren’t what they were.

Schultz said many things about this in a video, but the short form is “America is unsafe.”

“This is just the beginning. There are going to be many more [closings],” he said.

Where is this happening? It couldn’t be easier to guess. The 16 store closings are all in cities run by Democrats, including six in my decades-long former home, Los Angeles.

We all know that public safety is in a near-disastrous state. Crime and murder are up—way up. The public doesn’t feel safe, and it’s worse for the minorities whom these DAs claim they’re trying to help. It’s at the level of cognitive dissonance as these supposed law enforcement officials look the other way on violent “Antifa” or hypocritically lecture us on “Black Lives Matter” in places such as Chicago, where black neighborhoods have turned into shooting galleries under their administrative noses, with tiny children dying in the streets.

And who’s the man most responsible for this catastrophe? Well, we know and have known for a long time: George Soros. And we have documentation. No one has remotely his influence on the justice system of our country on the city level, where justice lives on a daily basis.

From Alex Schemmel at The National Desk, on June 6:

“WASHINGTON (TND)—The U.S. currently has 75 George Soros-backed prosecutors overseeing half of America’s 50 most populous cities, according to a new report from the Law Enforcement Legal Defense Fund (LELDF).

“While some states set contribution limits for city- and county-level candidates, many do not, or have much more lenient rules than for federal or statewide candidates. This allows for free-for-all spending from individuals, parties, unions, corporations, and political action committees in many city and county district attorney races across the country.

“Between 2018 and 2021, Soros spent $13 million on a total of 10 district attorney races using a combination of shell organizations, affiliates, and pass-through committees, the report estimates.”

Of course, no opponent had anywhere near that kind of money.

One could also ask, where were the Republicans in all this? How could they have let this happen? Soros essentially did what he wanted.

I’ve long wondered what motivates Soros, whether the billionaire wishes to destroy the system that so enriched him. He came out of the hell of communism. Maybe it’s his bizarre lack of remorse for his involvement with the Nazis during the Holocaust, documented in a famous, but hard-to-find “6o Minutes” interview. It all seemed sociopathic.

To make things worse, Soros is now buying 18 Hispanic radio stations just as that religious- and family-oriented group is turning to the right. That has alarmed the staff at South Florida’s conservative Radio Mambi, many of whom are refugees from communism, just like Soros. What a strange man. Something must be done. (Florida Gov. Ron DeSantis is already hitting back, putting his reelection ads on Soros’s stations.)

It would be a contribution far beyond his quixotic attempt to be president for Howard Schultz to sue Soros—and as publicly as possible.

Does Schultz have what they call “standing?” More than any other person, Soros enabled with his own money, or through cut-outs, the elections of the DAs in the cities where Schultz is closing up shop and undoubtedly will be closing up more as promised. It might be a stretch, but in a world where judges seem to judge more than the law, anything is possible. All it would take is a little judge-shopping, on the side of good for once.

More importantly, this would expose Soros and what he has done to the eyes of the urban public that’s suffering most from the horrendous results. The vast majority of them don’t know. They should. That’s the first step toward doing something.

Schultz, a multi-billionaire himself and the owner of a superyacht with a helipad and glass-bottomed pool, certainly has the money to afford the legal fees to undertake the suit.

He would be making his suit for all of us, but most specifically for his employees who have survived what must now be years of abuse.

Some of this abuse is unfortunately because of Schultz’s own policies. Those same people who criticized him for daring to mention an article that referenced “Fauxcahontas,” even though Warren really was dishonest about her background, applauded his policy of keeping his restrooms open to all, not just clients as most restaurants do. As far as I know, he has maintained those policies.

This resulted in needles, used syringes, and feces in Starbucks’s restrooms, a most unhealthy, not to say depressing, environment for the employees he claims to cherish. This is his opportunity to make restitution to them.

Will he take it? Of course, I’m skeptical. But Schultz is a smart man and by now, one can assume that he must understand, deep down, that this “woke” stuff is yet another Marxist gambit designed to undermine our country and therefore the world. Whether he’ll join the fight against it is the question.