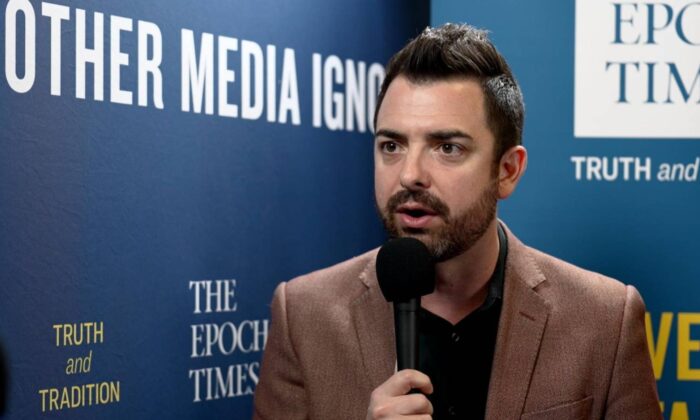 Most leftists are probably not aware of the religious impact on wokeism, but there is in it “this religious undertone that’s been passed down,” Miles said. “I think we need to call this stuff what it is, it is a religion.”

“In Marxism, man is the creator. It’s his labor. It’s his work that is producing; he’s making the world in his image. He’s taking the place of God, in that sense. And so this ideology is passed down,” Miles said. While Hegel focused a lot on the spirit and God, Marx focused more on the state.

Miles said as in religion, there is also evangelism in wokeism: “We have to get everybody to believe this.”

However, there is a difference between evangelism in the church versus evangelism among critical theorists, he pointed out. The evangelism within the church gives the people the dignity to choose, Miles explained. “We believe this is true. We hope you come to accept it and embrace it. If you don’t that’s your choice.

“Wokeism would say: You have to accept this. If you don’t, we’re gonna cancel you.”

The concept of liberation theology was developed in the 1950s and 1960s in Latin America by priest Gustavo Gutiérrez as an attempt to combine Marxism and Catholicism, Miles said, adding that one of the famous liberation theologians is Pope Francis.

It takes the archetypal Marxist conflict between two opposing classes: the bourgeoisie, “the oppressor,” and the proletariat, “the oppressed,” and replaces them with “rich” and “poor,” Miles explained.

Liberation theology stipulates that “there’s essentially a special blessing that exists on the poor, and so oftentimes there is not really an attempt to lift them out of their situation,” said Miles, author of the book “The Christian Left: How Liberal Thought Has Hijacked the Church.”

“It’s just to help them be able to experience the ‘blessing of god’ in their situation. And oftentimes, the people developing that ministry are elites and flying around in jets.

Miles believes that according to the Bible, God is “is the one that rights wrongs” and it doesn’t show favor to man. “We can’t get into a place to where we start dividing people upon classes, where we start creating some sort of favoritism of God.”

Critical race theory (CRT) is based on the Marxist concept of class struggle, but it applies this idea to race instead of social classes, dividing people into the oppressors and the oppressed based on their skin color.

Cone also defined two sins that a black person could commit: “The first was to fail to recognize that they’re oppressed,” Miles said. This is why people on the left hate personalities like Candace Owens, Alan West, and Larry Elder, who do not see themselves as oppressed, he explained.

“The second sin was to be nice to your oppressors,” Miles said, citing a prayer asking God for help to hate white people, written by a university professor.

Chanequa Walker-Barnes, a theology professor at Mercer University in Macon, Georgia, wrote a prayer that starts with the words “Dear God, Please help me to hate white people,” according to Campus Reform.

Miles said he took it as her devoutness to the tenets of black liberation theology, which is the field of her research.

The concept of liberation theology would not have arisen without the quest for the historical Jesus, as it wouldn’t have happened without Marx, Miles said.

The pastor has been tracing the origins of the quest for the historical Jesus and found that it was also inspired by Hegel and thinkers like him.

During the Enlightenment period, a group of Christian theologians, in an attempt to reform Christianity, tried to develop scientific, logical, and reasonable justifications to explain the miracles in the Bible, Miles said.

The philosophical and intellectual movement in Europe of the 17th and 18th centuries, known as the Enlightenment, emphasized reason, logic, and the scientific method as its tenets, so the miracles of the Bible did not really line up with the mindset of the day, Miles explained.

For example, those theologians explained the Biblical story of Jesus walking on water saying that Jesus might have been floating on a raft.

The Biblical story of Jesus miraculously feeding 5,000 people from only a few loaves of bread was explained by the theory assuming that Jesus was standing by a cave inside which monks were baking bread all morning, Miles said. Jesus supposedly was just passing bread baked by them, he added.

Miles thinks that Biblical stories should not be twisted like that. “Either you’re had to deal with the miracles in the Bible as presented, [or if] you cannot believe in them, you can discount them.”

Albert Schweitzer, one of the famous theologians of that period, portrayed Jesus as a prophet, a great social reformer, and a kind of apocalyptic voice, but not the savior of the world, Miles continued. “So Jesus is downgraded from savior of the world to a social activist.

“That’s what we’re seeing now in woke Christianity, and that influenced a lot of early liberal theologians to get us to where we are today.”

To discern what is truth in the current situation people need to have a plumb line, Miles said comparing it to building a house. A plumb line is needed to prevent erecting crooked walls, he explained.

“That’s really the heart behind all of this. Is there something that is absolutely true or is all truth relative, is all truth subjective,” Miles asked a rhetorical question.

“For me my plumb line is scripture,” Miles said. “I won’t try to force that on anybody else. But I think that people have to find that plumb line for their life.”