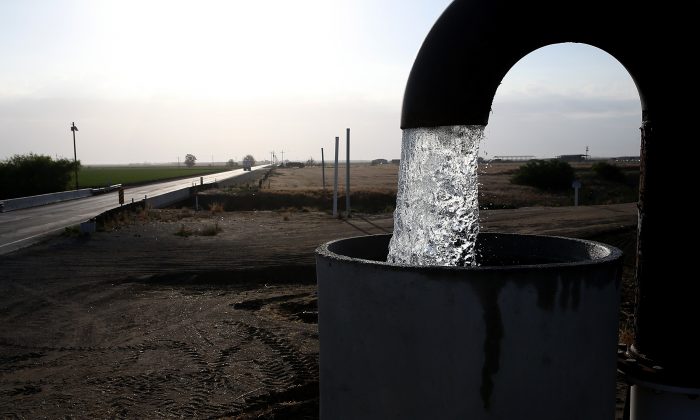 Well water is pumped from the ground on April 24 in Tulare, Calif. As California enters its fourth year of severe drought, farmers in the Central Valley are struggling to keep crops watered as wells run dry. (Justin Sullivan/Getty Images)
Opinion

How to Save California’s Precious Groundwater

As California suffers its fourth year of drought, much of the attention is focused on the state’s groundwater—a critical source of water and one that is being stretched.

What’s happening to the state’s groundwater resources during this drought, and how can scientists and policymakers manage it effectively?

While the science of groundwater is mostly well-known and tested, the effective management of it, in concert with management of surface water, remains a frontier, like dark matter.

For an analogy closer to home, consider the world of finance. Imagine that all of your money, including retirement funds, is in two bank accounts. The balance, deposits and withdrawals from account A are known, but are largely unknown for account B.

Then here’s the kicker: when the balance in account A gets depleted, things change: uncontrolled, largely unknown amounts of cash are withdrawn from account B. How would this financial management strategy work for you? Of course, it would be disastrous, yet this is how we commonly mismanage our interconnected accounts A, surface water, and B, groundwater.

Such mismanagement will cause crises, except when account B is flush with cash or water. Indeed, for the last half-century many groundwater systems have been flush enough to cover for lack of water resources management.

Now, however, it is clear that we have moved into a new era of water scarcity driven by growing world population and water demand that is exposing more groundwater crises across the globe, including the North China Plain, India, the Middle East, Australia, and California.

To further complicate matters, our climate already seems to be fulfilling the projections of climate models that indicate futures with more extreme dry and wet periods.

The good news is that, like in finance, most water crises are avoidable if we truly manage both surface water and groundwater.

Why has this largely not happened and why is there so little progress in dealing with water crises? I believe a big part of the explanation lies in lack of motivation and lack of transparency about the “accounts.”

There is little motivation to live within our means unless the consequences of our overconsumption are sufficiently clear.

In finance, the obvious consequence is account overdraft and unsustainable debt. Similarly, we refer to excessive groundwater depletion as overdraft, but unlike the finance case, there are multiple negative consequences that emerge over time, some of them more or less immediately, and others on time scales of decades to centuries.

Here is a typical sequence of phenomena as groundwater development and overdraft proceeding in the thick, alluvial aquifer systems that are common to California and elsewhere:

1. Groundwater levels decline over a period of months to years, causing somewhat higher energy costs to pump the water.

3. In coastal areas, saltwater from the ocean intrudes into the fresh aquifer system, contaminating wells near the coast. Meanwhile, most of the wells in the basin are still able to pump large amounts of potable groundwater.

4. Similarly, severely depleted inland aquifers may begin to draw in poor-quality groundwater residing in the non-aquifer media (that is, the silts and clays that commonly make up a large percentage of the geologic media that compose what we call aquifers) and from deep, saline groundwater systems that underlie the fresh groundwater.

5. After a period of decades, the ongoing overdraft effectively converts the groundwater system into a closed hydrologic basin in which the predominant exit for water is evaporation, resulting in salt accumulation and salinization, likely on a century time scale. (For examples of what happens in closed hydrologic basins, one need look no further than places like Mono Lake and the Salton Sea in California and Great Salt Lake in Utah, all of which are saltier than seawater.)

6. Eventual emptying of the fresh groundwater from the basin.

Now let us return to the issues of motivation and transparency. The negative consequences often do not motivate change because they unfold somewhat complexly on multiple time scales and because the links between our land and water use practices and these consequences are not very transparent or obvious.

For example, consequences one through three on the above list tend to be the most immediate, unfolding on time scales of years or a couple decades. But with the possible exception of seawater intrusion and excessive subsidence, we are often willing to tolerate these.

Subsidence can be very damaging to surface structures, including buildings, canals, pipelines, railroads, and can increase flood risk in low-lying and coastal areas. A cessation of the overdraft, however, will arrest the subsidence, as happened in the San Joaquin Valley circa 1970s, when importation of surface water and reductions in groundwater pumping halted the dramatic amounts (up to about 10 meters) of subsidence, after which any damage to surface structures was repaired.

Nevertheless, as groundwater production in the San Joaquin Valley and Tulare Lake Basin has increased, alarming amounts of subsidence are occurring yet again. (It is a myth, by the way, that subsidence destroys the water-transmitting capabilities of the aquifer system, because nearly all the compaction occurs in the non-aquifer materials, the silts and clays.)

Regardless of concerns about subsidence, mostly freshwater is still being pumped from the aquifer systems. So, everything is still OK, right?

It would seem so. Groundwater pumpers can still make withdrawals from the “account,” and any other impacts on surface water resources already happened years or decades ago, often unbeknownst to the water users. As a result, there is inherently little motivation to curtail pumping, even though it will ultimately cause problems.

Perhaps the area with the least visibility has the biggest consequences—numbers four through six on our list, which take decades to centuries to play out, but represent a transition toward utter nonsustainability.

This is where our current water system in places like the western U.S. begins to look like a grand experiment, because we have been intensively pumping groundwater for only a little more than half-century, yet the big, nonsustainable consequences typically take longer than that to develop.

The obvious one to avoid is emptying the basin, but because the volumes of groundwater in many basins are vast, I do not know of a single, major groundwater basin where it has happened.

Long before the basin is emptied, however, the groundwater quality degradation caused by rising salinity and contamination will likely happen. This would represent a point of no return, where most of the freshwater resource of the basin would effectively be destroyed irreversibly, requiring energy-intensive desalination to treat any future groundwater withdrawals.

The scientific basis for groundwater management lies in averting or mitigating all of the negative consequences.

But ultimately the motivation for management is to never over-deplete the fresh groundwater. If it gets to that point, we are effectively destroying the resource, not only from emptying of the basin but also due to water quality degradation.

Any regulation works best when those being regulated agree with the premises and objectives of the regulation. If most of the population thinks that the regulation is unnecessary because, for example, they are doing fine and their wells still produce lots of clean water, the regulation is doomed to ineffectiveness and may generate more government resentment than anything.

A key hurdle in making SGMA effective, then, will be giving the water users greater motivation by making transparent the ultimate consequences of ignoring the laws of groundwater nature.

Accomplishing this is not unlike researching dark matter. It requires a concerted effort through the use of measurements and computer models. Fortunately, the technology to do this in groundwater science already exists, although there is much work to be done.

Graham Fogg is professor of hydrogeology and hydrogeologist at University of California–Davis. This article was previously published by TheConversation.com