How to Make the Big Bucks While Wrecking a Country 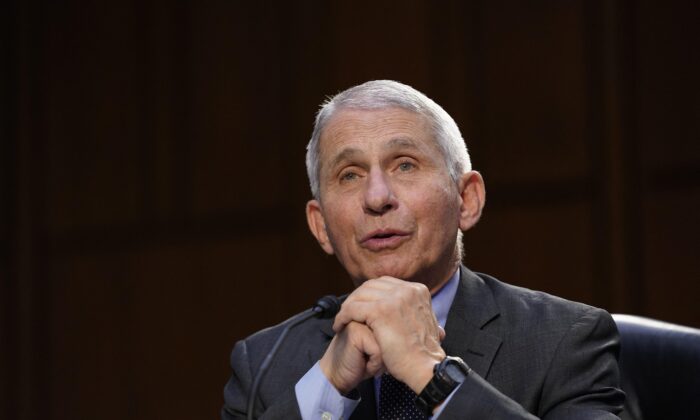 NIAID Director Dr. Anthony Fauci speaks to members of Congress during a hearing in Washington on March 18, 2021. (Susan Walsh/Pool/AFP via Getty Images)

Of all these many sketchy characters involved at the highest levels in the great wreckage of 2020–2022, Dr. Anthony Fauci of the National Institute of Allergy and Infectious Diseases occupies a singular position.

He’s the most well-known of all the lockdowners and advocates of vaccine mandates. He has since spoken at many college commencements and is still deferred to daily by an obsequious media. He’s surrounded daily and only by sycophants, and he regards all criticism of him as a form of treason.

And yet, when pressed by Sen. Rand Paul on his past statements and actions, even on the email we have from his own hand, Fauci refuses any responsibility at all. He says he never locked anyone down—which, I suppose, is technically true if by that you mean actually padlocked the churches and schools and personally enforced bans against weddings and funerals.

We know that Fauci presided over the crafting of the regulations, and yet, he continues to say he only followed the guidance of others. When asked about his leaky shots, and the mandates thereof, he says he knows nothing about them because he doesn’t serve on the Food and Drug Administration or Centers for Disease Control and Prevention committees that approved them.

For that matter, he still claims that he didn’t sign off on funding gain-of-function research in Wuhan, China, even though we have piles of receipts and personal testimony.

There might be some solace to experience from his retirement, but even that doesn’t go down well. The intrepid Adam Andrzejewski has once again taken a very close look at Fauci’s salary, awards, and various other benefits to conclude that “Fauci’s Net Worth Soared to $12.6+ Million During Pandemic—Up $5 Million (2019–2021).”

This is during a time when the real income of Americans has fallen for 18 months straight—the longest period of decline on record. It’s lower now than before lockdowns happened. In other words, the large majority of citizens who suffered under the policies that Fauci imposed have seen their standard of living fall dramatically, even while the lockdown czar of America made an additional $5,000,000 and stands to enjoy a nearly half-million-dollar retirement package.

Among the details of Fauci’s finances that Andrzejewski found through his Freedom of Information Act (FOIA) requests and sleuthing include totals of the Fauci household, which includes Christine Grady, who’s the chief bioethicist at the National Institutes of Health (you can’t make this stuff up) with a salary of $234,284.

We should take a moment to appreciate this kind of reporting, because it comes at a heavy personal and professional price. Andrzejewski was once one of the more celebrated contributors to Forbes. After 206 investigative pieces, he was elevated by the magazine in 2018 to become “senior policy contributor” and was set up for a great and rising career with his aim of finding out the financial details of powerful people and their actions.

Then, he made the mistake of starting to look closely at Fauci’s finances. It was he who discovered that Fauci is the highest-paid employee in the whole of the federal government and further revealed that NIH employees enjoy generous royalty payments from vaccine companies.

Soon after Andrzejewski’s investigative reports, Forbes started harassing him, then vetting him, then demanding preapproval of article topics, and finally fired him.

Thank goodness, he was able quickly to create a Substack, where his work continues. In the course of trying to figure out what happened, Andrzejewski made another FOIA request for the emails between the NIH and Forbes. Sure enough, he turned up an extremely incriminating paper trail and posted screenshots of it all.

No question that the NIH had a hand in killing Andrzejewski’s career at the publication. Forbes gave in to government pressure to protect Fauci, just as so many others have done and continue to do.

Again, we have all the receipts. This is a direct and obvious violation of the First Amendment—the government using its power to kill the freedoms and careers of reporters who dare to take a close look. The picture is complicated further by Forbes’s own reliance on advertising dollars from Pfizer. The company spends $100 million on advertising, and Forbes is one of the beneficiaries, even to the point of including a BrandVoice page on the Forbes site.

So the financial and power links here are complex and deep. We would be naïve to believe that all of this is on the up-and-up.

Of course, this is only the tip of the iceberg of the number of individuals, institutions, corporations, and governmental agencies—at all levels of government and all over the world—that made out like bandits in the past three years, even as the living standards and liberties of people all over the world were devastated.

All their tremendous gains came at the expense of everyone else. This isn’t the market at work in which everyone wins as wealth rises for everyone. This system of conquest and pillage is an ancient form of moneymaking in which the gains of a handful of elites come at the expense of everyone else. When The New York Times on Feb. 28, 2020, recommended that we “go medieval” on the coronavirus, this might have been part of what they meant.

This is only one sign of a general devolution we’ve been on for several years now. It must be reversed if we are to preserve civilization as we once knew it. Finding out all the details of ill-gotten gains is certainly an excellent place to start. Those who are doing the hard work at great personal risk to their careers certainly deserve our respect.