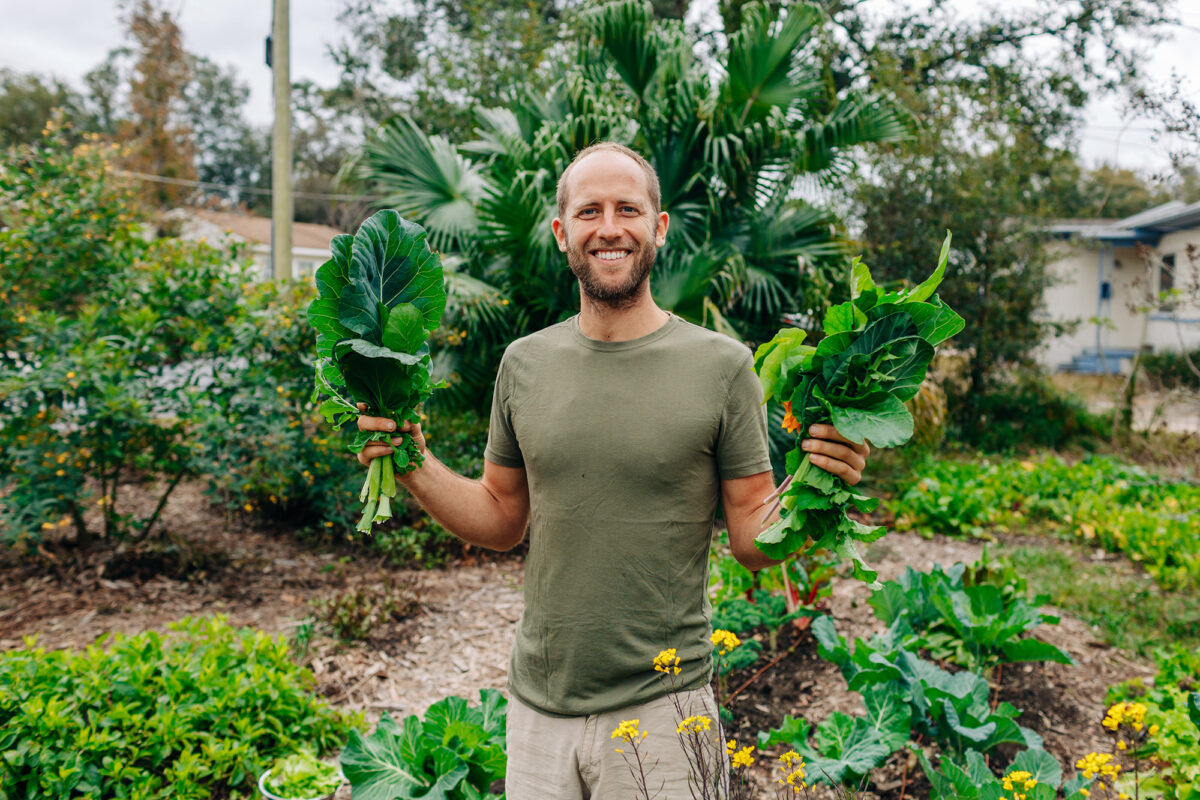 There's no doubt that Mr Greenfield is an inspiration to us all. Photo by www.SierraFord.com
Better Living

How to Grow and Forage Without Owning Land

If everyone began doing this, it could put supermarkets out of business, save you a small fortune and save our planet from soil degradation, water pollution and climate change. What this man achieved in this one-year challenge is nothing short of remarkable.

The industrialization of our chemical-dependent food system has caused problems that are nearly insurmountable, including soil degradation, water pollution, loss of biodiversity, a decline in public health and climate change. But food production doesn’t have to be globalized, industrialized or even monetized.

That’s the message environmental activist and humanitarian Rob Greenfield wants to convey in a new project in which he aims to grow and forage 100% of his own food for one year. The challenge is featured in a two-part film produced by Peter Kanaris of GreenDreamsFL titled, “Growing & Foraging 100% of His Food WITHOUT LAND OF HIS OWN: 1-Year Challenge w/ Rob Greenfield.”

The film, set in Orlando, Florida, shows Greenfield 138 days into his yearlong project of growing and foraging all of his own food, and some of his own medicine, too. The best part? Greenfield doesn’t own any land. He’s growing food in six privately owned yards and a handful of other spots that total less than 4,000 square feet of space.

Greenfield did not go to school for horticulture, either. And, he doesn’t have any experience in agriculture. He does possess a certificate in permaculture, but says it never taught him how to actually plant anything. For instance, he had to learn how much sun is needed to grow carrots, how much water kale requires and what time of year is best to plant certain plants.

Growing and Foraging 100% of His Own Food

Despite his lack of experience, he learned how to successfully grow a variety of food and herbs including green onions, carrots, beets, celery, spinach, kale, cabbage, tomatoes, garlic, cilantro and dill. Remarkably, in less than one year (about 10 months), Greenfield was able to grow 100% of his own food.

But it gets better. He’s growing so much food that his project doubles as a community garden, where locals can sample fresh, locally grown produce, and leave feeling inspired to try and grow some of their own.

“At least that’s my hope,” says Greenfield in the film. “I took on the challenge to not just feed myself, but to inspire others to try and do the same. That could mean planting your first tomato plant, starting an herb garden on your apartment balcony or turning your front or backyard into a full-on garden. Growing your own food is something we all can do.”

In an effort to conserve water, Greenfield uses a drip irrigation system that delivers water directly to the roots of plants. Drip irrigation is one of the most efficient watering systems, as it can reduce water usage by 30% to 70%. Greenfield says he could grow the food without a drip irrigation system, but with all of the different gardens he’s growing, it would add up to 10 hours more per week of labor on top of the 40 to 60 hours he already spends tending to his gardens.

In addition to his gardens, Greenfield also helped plant more than 200 community fruit trees in Orlando, including cherry, peach, mulberry, avocado and loquat trees. The trees are marked with a sign that says: “I am a community fruit tree. Please enjoy my fruit.” The community trees act as a reminder that food can be available outside of the grocery store.

‘Food Is a Gateway to Getting People to Rethink Everything’

The film shows Greenfield munching on fresh mulberries from one of the community fruit trees he helped plant. “Food is a gateway to getting people to rethink everything,” says Greenfield, adding:

“The idea is to try and get food grown freely all around us. A lot of people when they see food that’s growing free, that’s nutritious and delicious, for the first time, and they realize that it doesn’t have to come from the grocery store, that can be a pretty revolutionary moment.

I’m super passionate about growing food. But the passion is equally as much about inspiring people not just to grow their own food, but to look at the world in a different way, to start to see the world as something to work with, rather than against, in all facets of life: our food, our water, our energy, our waste and our transportation.

Just every way we deal with the Earth. I think food is one of the greatest gateways because we eat food three times a day, and some of us, more like 10 times a day. It’s our connection to our community. It’s our fun. It’s our social life. For a lot of us, we eat to live and we live to eat. So, if you can get people really thinking about their food, I think you can get people thinking about their entire lives.”

There’s no doubt that Greenfield is an inspiration to us all. He’s a force to be reckoned with when it comes to raising awareness about some of the most pressing social and environmental issues of our time, including food waste, plastic pollution, climate change, corporatism and homelessness, just to name a few.1

‘Live Simple and You Will Live Free’

With more than half a million “likes” on Facebook and nearly 100,000 YouTube subscribers (some of his videos have views numbering in the millions), Greenfield has captured the attention of audiences worldwide.

His motto “Live simple and you will live free” summarizes his belief that happiness is not derived from money and possessions, but rather comes from the meaningful connections we make with others, and having a profound appreciation and respect for our planet’s natural resources and the life that exists within it.

Greenfield isn’t just passionate about growing his own food and showing others they can do the same. He’s also dedicated to creating awareness about food waste and food insecurity.

Americans discard an estimated 34 million tons of food every year — that’s like tossing a quarter of your groceries into the trash. The food waste problem is not limited to America’s home kitchens, but also occurs in restaurants, grocery stores and on farms.

Through his campaign “The Food Waste Fiasco,”2 Greenfield created awareness around food waste by diving into thousands of dumpsters to show how nearly half of all food in the U.S. is wasted.3

In one of his videos, “Dumpster Diving for Food with Rob Greenfield,” he showed how he was able to fill an empty pantry and fridge with more than $1,000 worth of perfectly good food after just five hours of dumpster diving.4 “That’s collecting $200 an hour worth of food,” he says.

Greenfield is also a big advocate of showing that people are good. In an effort to illustrate this, he bravely traveled to Rio, Brazil, with zero dollars to his name. He was able to travel 7,000 miles to Panama, relying on nothing except for the goodness of others, who kindly offered him food, shelter and transportation.

He even used other people’s cell phones to capture the footage, some of which was used in a six-episode series called “Free Ride” that aired on the Discovery Channel. To learn more about Greenfield and his adventures, check out his website, RobGreenfield.TV.5

This article was previously published July 6, 2019 on Mercola.com