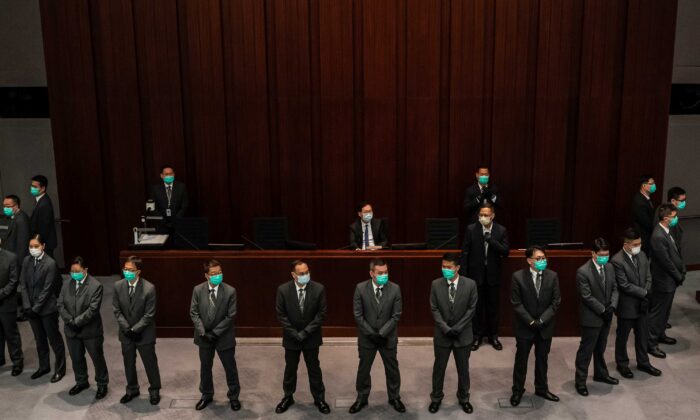 Pro-Beijing lawmaker Chan Kin Por is surrounded by security officers ahead of a meeting at the Legislative Council in Hong Kong on May 18, 2020. (Anthony Kwan/Getty Images)
Thinking About China

How to Get to a Post-CCP China

The model exists, let’s apply some lessons learned and replay it passionately

As we have seen the naked thuggery of the Chinese Communist Party in Hong Kong play out—a key moment was the Hong Kong Legislative Council (LegCo) podium being surrounded on May 18 with smartly dressed, CCP-selected enforcers—the thought of how we get to a post-CCP China came to mind.

Symbols and images are important for a cause. First, we had Tankman in Tiananmen Square, now we have the soon-to-be iconic image of the perfectly surrounded podium—it couldn’t have been better staged or darkly comical if Hollywood had choreographed the photoshoot.

The LegCo takeover will possibly rate with Kristallnacht, Night of the Long Knives, or other infamous events in history as a totalitarian system leveraged an opportunity (a self-caused pandemic and subsequent removal of remaining Hong Kong civil liberties in the name of fighting the virus) to physically push out the opposition and complete a consolidation of power.

This picture of brute force crushing democracy will act as an inflection point marking the beginning of the next stage of conflict with the CCP. The LegCo takeover was the harbinger of the announcement of the intent to push through Article 23—the sedition law that Hongkongers see as the cancellation of their civil liberties.

Violent or not, this is a conflict with only one possible outcome. With the wall now going up around Hong Kong—we have the modern symbol of the need to liberate East Berlin, East Germany, and the rest of the trapped populations behind the Iron Curtain.

Having organized, trained, and equipped a few foreign national armies and security forces, including one specifically for regime change, I do have some experience to share on this topic.

At the risk of misquoting Eisenhower, one thing I can say about these endeavors—planning is everything, plans are worthless. This is perhaps better characterized as plan and implement passionately, but be ready to adapt.

A so-so plan aggressively implemented is always better than a better plan implemented weakly, dispassionately, or late. Recruiting and organizing regime exiles and soliciting existing high members of a regime by their personal cellphones to make an important life decision is one model for regime change.

But plans have this pesky habit of not following the path you’ve laid out; that’s why agility is important. The deviations could be small, like having to secure the release of a cooperative, high-ranking Iraqi general, who was still imprisoned after the dictator was deposed, solely because of the bureaucratic error of guards and interrogators not receiving the correct list after our arrival in Baghdad.

Or the deviation could be as big as the country slipping into violent sectarian civil war, unleashed by our ejection of the dictator, but failure to passionately implement a plan and path for what happens next.

Yes, Saddam Hussein was a very evil person and needed to go away—but if we had the opportunity to do it over, in hindsight, I would have proposed some tweaking to the plan. While the end state of Saddam’s removal was still needed, we probably could have done it a little differently.

Almost 20 years later, we’re still in Iraq, although in a different mode, learning to stay in a very precise lane and mission, and letting the Iraqis figure out their society on their own for the most part.

An alternative course of action to effect governance change is one that empowers the center of gravity to be the driving force of the plan. We can shape and influence the environment, while letting the population seize the opportunity and change their form of government. In the end, it’s their vote and decision, they are the center of gravity. We simply set the stage and the population goes for it on their own, as regime members realize the futility of their ways.

This is more along the lines of the sudden evaporation of communism in East Germany and the Soviet Union in 1989. It magically just happened. After years of strategies, debates, and deliberations over how to deal with the Soviets and the existential fear of triggering a nuclear exchange—it just happened. We did a lot to set the stage and the population took care of it.

An interesting signal just occurred, and it caused a barely perceptible ripple, but I think it was important. A retired major general in the People’s Liberation Army Air Force just made an interesting statement that signals something.

Remember the name Qiao Liang? Remember the book title and moniker of “Unrestricted Warfare,” advocating asymmetric conflict with the United States? Yes, the same Qiao Liang who wrote this book in 2004 just came out and said words to the effect that retaking Taiwan was not worth the cost and the focus should be building up an affluent domestic society. And Qiao was just echoed by the CCP chairman.

Interesting. What does it mean? Is this some kind of “Go”-ish, double or triple fake-out? I’m not good after double fake-outs, I lose track of things, so I’ll take these two comments at face value. I would suggest a pain point has been achieved and swirl, to say the least, is happening internally—this is opportunity.

So in light of achieving a similar chain of events as the 1989 evaporation, our job is to shape the environment by three distinct actions.

People forget, strong support of regime change in Iraq was actually U.S. law, it wasn’t feeling, emotion, or opinion. It was called the 1998 Iraqi Liberation Act. A softer act of Congress exists from 2006 on Iran, called the Iran Freedom and Support Act, which encourages change in Iran.

Because of the shameless exploitation of the CCP virus, the decades of theft and weaponization of intellectual property against us, the violent oppression of Hongkongers (11,000 abductions and murders from sources on the ground according to one source), Uyghurs, Falun Gong, Christians, and all others seeking freedom, and countless other undeniable heinous and dysfunctional actions, a similar statute-based statement is in order between Congress and the president.

An unambiguous piece of legislation supporting the peaceful transition of governance away from the CCP should be proposed, debated, and passed. The 2017 and 2018 National Security and National Defense Strategies were excellent starts and are now due for additional refinements and updates.

At all times, all instruments of power in the Executive and Legislative branches should be unwrapped, rejuvenated, and focused unambiguously on the CCP problem set. All with a consistent message of resolve to focus all instruments of national power to demonstrate commitment, deterrence, and focus shaping and enabling activities so the people of China feel empowered to address changing to a new form of governance in China and putting the CCP in the rearview mirror.

The George Kennan model to deal with the dysfunctional Soviet Union was containment. And backing containment was a legendary nuclear force or “Nuclear Umbrella.” It was a bit more complex and sophisticated than that, but that was the basic thesis of the model. Resolve as mentioned is very important, but there has to be a demonstrable, visible, intimidating manifestation.

This manifestation is missing in our implementation efforts. Freedom of Navigation forays are very important—but there has to be a lot more. Exemplars forgotten in history are the parades that Presidents Eisenhower and Kennedy conducted.

Kennedy’s Oct. 12, 1961, visit to Fort Bragg, North Carolina, was a stunning and spectacular display of nuclear, conventional, and special operations capabilities. The target audience for this demonstration was not the president, it was the Soviets. They were watching.

So a focused conventional, nuclear, special operations, and asymmetric deterrence plan and implementation is needed post-haste. Parades in the United States and other places are part of that, but also forward activities that demonstrate deterrence—and the next phase—rollback. That attitude was what Reagan added to the plan in the 1980s. It changed everything.

A significant part of deterrence is a full spectrum counter-influence plan to blunt, discredit, and counteract intellectual property theft, disinformation, and CCP foreign adventurism. This means many things, but aggressive FBI use of the Foreign Agent Registration Act, a Joint Inter-Agency Task Force to focus the American and strategic message theme, and ejecting the CCP from places like the Bahamas and Panama to start deconstructing the Belt and Road Initiative, are good starting points on this sweeping counter-influence initiative.

Focus on the Two Centers of Gravity

Resolve and deterrence are all about enabling the center of gravity—the oppressed population of China—toward retiring the CCP. Despite the Great Firewall, enough of the citizenry know the regime is corrupt, violent, and repressive, but they need to see, feel, and hear resolve and deterrence.

And there’s many ways they can. If the outside world demonstrates resolve and deterrence, the Chinese people will take it from there and accomplish the mission for themselves.

A vital adjunct is the flow of financial investments to the CCP—this is their blood and oxygen. We’ve been successful in gaining the support of the president in countermanding an incredibly ignorant, tone-deaf, and out-of-touch decision.

Next is a quick application of Securities and Exchange Commission rules on transparency and reporting to all CCP-related firms. After that, a review of incorporation laws to address CCP influence on Silicon Valley, the entertainment industry, and other places. There’s a conveyor belt of additional quick-win actions that will choke the life out of the CCP.

During the Cold War, we worked hard, we agonized, we experienced successes and reversals, and sometimes, some seemed to give up and ask, “How is this going to end?” Or lament, “There’s nothing we can do.”

And then, a new president came in who turned D.C.—and the world—upside down by rejecting the status quo. And after showing resolve, active deterrence, and focusing on the Soviet centers of gravity, the Soviets collapsed and went away. Relatively peacefully. We have a president who’s turned the elites and their narrative upside down like never before.

We have the president, let’s repeat the model.