Conclusion: How the Specter of Communism Is Ruling Our World (UPDATED) 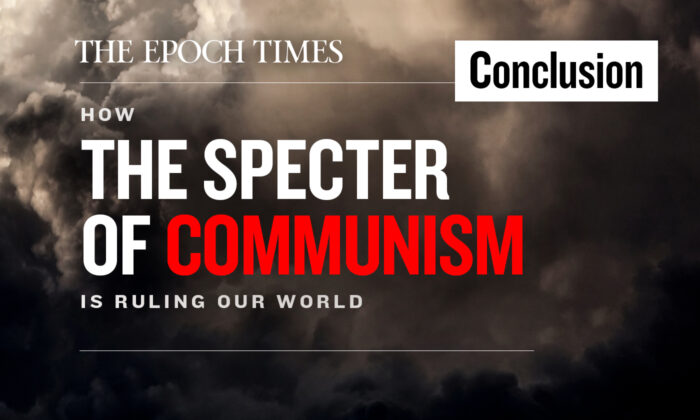 By The Editorial Team of "Nine Commentaries on the Communist Party"

The Epoch Times here serializes an adaptation from the Chinese of a new book, How the Specter of Communism Is Ruling Our World, by the editorial team of the Nine Commentaries on the Communist Party.

Over the long course of history, humankind has seen eras of splendor and glory, but also has endured countless episodes of tragedy and disaster. Looking back, we find that moral rectitude ushers in clean governance, economic prosperity, cultural brilliance, and national strength, whereas moral degeneracy signals the fall of nations and the extinction of entire civilizations.

Today, humankind has reached a zenith in material wealth, yet it faces unprecedented challenges caused by the havoc of communism. The ultimate goal of communism is not to establish a heaven on earth, but to destroy humankind. The nature of communism is that of an evil specter forged by hate, degeneracy, and other elemental forces in the universe. Out of hate, it slaughtered more than one hundred million people, trampled several thousand years’ worth of exquisite civilization, and corrupted human morality.

The communist specter made arrangements to corrupt both the East and the West, adopting different strategies in different countries. In the East, it slaughtered people ruthlessly and forced them to accept atheism. In the West, it took an alternate route: infiltrating society in covert form, coaxing people into abandoning their traditional faiths and moral values.

Using communist regimes and organizations, fellow travelers, accomplices, and other agents, communism rallied negative elements in the human world to amass formidable power. With this power, it subverted and established control in all social spheres, including politics, economics, law, education, the media, the arts, and culture. Today’s humankind is in dire straits.

In hindsight, the reasons for communism’s triumph over the past two centuries are clear. When people indulge in the material pleasures brought by technological advancement and allow atheism to spread, they reject divine mercy and turn themselves over to evil. Having strayed from the traditions established by the divine, much of humanity is now easily deceived by communism and its myriad ideological permutations, such as socialism, liberalism, and progressivism.

Traditional culture shows the path for humans to maintain their morality and gain salvation in the final epoch. But with traditional culture under attack and basic moral truths cast aside, the link between man and the divine has been severed. Man can no longer understand divine instruction, and evil reigns supreme, wreaking havoc in the human realm. When human morality drops below the basic standards required of human beings, the divine must reluctantly abandon humankind as the devil leads man into the abyss of damnation.

But having reached an extreme, the circumstances are bound to reverse. It is an eternal principle in the human realm that evil can never defeat righteousness. Communism’s momentary victory is a temporary phenomenon, brought about by the devil, which has intimidated people with its illusory might and treacherous temptations. Man, while imperfect, innately carries kindness, virtue, and moral courage, which have been nurtured and passed down for millennia. In this, we find hope.

Global events are developing at an incredible pace. Righteous elements are growing stronger, and the world’s people are awakening.

In China, millions of people have peacefully resisted the Chinese Communist Party’s tyrannical rule by remaining steadfast in their faith and morality. Inspired by the editorial series Nine Commentaries on the Communist Party, more than 350 million Chinese have bravely renounced their ties with the CCP and its affiliated organizations, through the act of “tui dang,” or “quitting the Party.” More and more individuals are making a heartfelt decision to free themselves from the shackles of communism. The disintegration of the Communist Party is already well underway.

The end of the Communist Party is a matter of divine arrangement. Should China’s leaders take steps to dismantle the Party, they will be provided with all the conditions required for a clean transition. In the future, they stand to gain true authority — that which is granted by the divine. Should they stubbornly refuse to make this break, they will take the Party’s fate as their own, joining in the calamities of its final downfall.

The world is experiencing a revival of traditional culture and morality in alignment with the universal values of truthfulness, compassion, and tolerance. At the fore of this renaissance is Shen Yun Performing Arts, which tours five continents every year. In its display of classical Chinese dance, Shen Yun brings universal values to audiences around the world.

The West has begun to recognize the communist infiltration and its subversion of traditional culture that has taken place over the past century. Society has begun to be cleansed of communist elements and deviated modern culture in many spheres, from law and education to government administration and international relations. Governments are becoming more vigilant against communist regimes and their enablers, which is greatly reducing communism’s influence on the global stage.

Communism is not an enemy that can be defeated by military force. To free the world from its grasp, we must start by purifying ourselves from the inside. Li Hongzhi, the founder of Falun Gong, wrote in his article “Pacify the External by Cultivating the Internal”:

If people do not value virtue, the world will be in great chaos and out of control; everyone will become enemies of one another and live without happiness. Living without happiness, they will not fear death. Lao Zi said, “If the populace doesn’t fear death, what good will it do to threaten them with death?” This is a great, imminent danger. A peaceful world is what people hope for. If at this point an excessive number of laws and decrees are created to secure stability, it will end up having the opposite effect. In order to solve this problem, virtue has to be cultivated around the world — only this way can the problem be fundamentally resolved. If officials are unselfish, the state will not be corrupt. If the population values self-cultivation and the nurturing of virtues, and if both officials and civilians alike exercise self-restraint in their minds, the whole nation will be stable and supported by the people. Being solid and stable, the nation will naturally intimidate foreign enemies and peace will thus reign under heaven. This is the work of a sage. [1]

The merciful Creator has always been watching over humankind. Disasters occur when man turns against the divine, and humanity can be saved only by returning to our divinely bestowed heritage. As long as we remain unmoved by the devil’s facades, maintain true compassion, follow divine standards for being human, revive traditional values, and return to traditional culture, the divine will deliver humankind from evil. Today, whether or not humanity will walk this path is the choice that we all face.

Read the series here: How the Specter of Communism Is Ruling Our World

1. Li Hongzhi, “Pacify the External by Cultivating the Internal,” in Essentials for Further Advancement, January 5, 1996, https://www.falundafa.org/eng/eng/jjyz24.htm

The Editorial Team of "Nine Commentaries on the Communist Party"