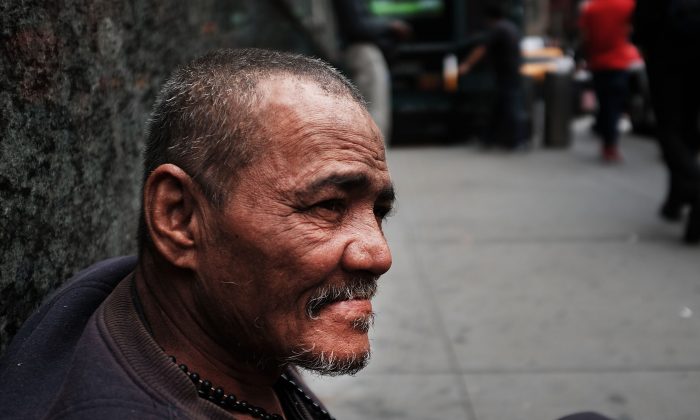 A homeless man pauses along Eighth Avenue in Manhattan in New York City on May 18, 2015. (Spencer Platt/Getty Images)
Opinion

How the Homeless Population Is Changing: It’s Older and Sicker

On any given night in the United States, according to the Department of Housing and Urban Development, over half a million people are without a home. That number may have decreased nationwide in the past few years, but California remains on the forefront of the problem, accounting for 20 percent of the country’s homeless in 2014.

With the winter’s freezing temperatures and El Niño’s massive rainstorms, what to do about the thousands living in our city streets has been making headlines on both the East and West coasts.

What policymakers and the general public need to recognize is that the homeless are aging faster than the general population in the United States. This shift in the demographics has major implications for how municipalities and health care providers deal with homeless populations.

To put it bluntly, as a society, we face the specter of older adults dying on the streets.

In fact, people born in the second half of the baby boom (1955–1964) have had an elevated risk of homelessness compared to other age groups throughout their lives.

So how have people aged 50 and over become homeless? And what happens to them and their health after they are homeless?

These are the questions my research team, funded by the National Institute on Aging, has been asking 350 participants in a study we’ve been conducting since July 2013 in Oakland, California.

Our results have shown that a large proportion of the older homeless population in Oakland first became homeless late in life, and once they become homeless, their health declines precipitously.

Oakland, like most places in the United States, has a problem with housing costs, particularly for older adults. In the United States, more than 30 percent of renters and 23 percent of homeowners aged 50 and older spend more than half of their household income on rent. This makes it hard to pay for food and medicine, and puts them at high risk of becoming homeless.

California has the highest housing costs of any large state, and they are rising faster than elsewhere. It is not surprising that Oakland has a large homeless population.

Efforts Made to Protect Homeless as Storm Hits California

The common perception of homelessness is that it is a problem that afflicts only those with mental health and substance use problems. But this description doesn’t describe the experience of older adults, particularly those who first experienced homelessness late in life.

For the most part, these are men and women who worked throughout their lives in low-skill, low-wage jobs. They are also disproportionately people of color: Oakland’s population is 28 percent African American, but 80 percent of our study participants are.

The stories they have told us follow a similar pattern. One of our participants spoke of the shock of losing his job after 27 years:

Another described losing his housing after being evicted when his wife had had a stroke and his daughter went back on her promise to let them stay:

After we moved out of the place, turned in the keys and everything we went over to her house and she said, “Y’all can’t stay here.” And I said, “I got $9 in my pocket … at least let your mother spend the night because we don’t have enough money to get a motel room.” She said, “No.” So that was the beginning.

Their lives became derailed by job loss, illness, a new disability, the death of a loved one, or an interaction with the criminal justice system. Often, it was a combination of these factors that led to homelessness.

The other half of the older homeless we surveyed had been homeless on and off for years. Much of this time was spent cycling through jails, prisons, and hospitals.

For these people, life has been difficult from their childhood.

One participant described how abuse had caused him to flee his family, beginning a lifetime of homelessness:

“Next time you, if you run away, I’ll beat you with a car chain or I’m going to throw you out the window.” … Then I looked out the window and said—we lived on the 13th floor—I said, “I ain’t playing with this man.” He went to work, I had whatever I had on me, I was out the door.

In many cases, participants’ drug and alcohol abuse started early, as did mental health problems.

All our study participants, whether newly homeless or homeless for many years, faced challenges with their health once they lost their home.

As research shows, homeless people in their 50s and 60s have similar or worse health problems than people in the general population who are in their 70s and 80s.

There are many causes for this discrepancy. High rates of smoking, alcohol, and drug use; poor access to health care, poor nutrition, and high stress are just some of the factors that take their toll.

People who are homeless also have a hard time getting medical care. They may qualify for public insurance, but they often don’t have the wherewithal to get to a clinic or to contact a health provider. Others prioritize obtaining food and shelter or don’t seek health care because of shame around being homeless or fear of how health care providers will treat them.

When the homeless population was made up of a majority of younger adults, health care providers focused on treating substance use and mental health disorders, traumatic injuries, and infections, many of which could be treated with short-term care.

Defensive Architecture: Designing the Homeless out of Our Cities

Now, with an older homeless population, health care providers have the difficult task of managing chronic diseases like diabetes and heart and lung disease.

People with chronic diseases need to make repeated visits to their health care provider and adhere to complicated medication regimens, specific diets, and physical routines. None of these are easy to stick to, but doing so becomes almost impossible for people who are homeless.

It is hardly surprising that only about one in five of our participants were housed one year after we first met them.

The point our study highlights is that the systems set up in the 1980s were not designed to serve an aging population.

Cognitive impairment, for example, makes it difficult to follow through with instructions to come to appointments, fill out complicated paperwork for disability benefits or housing applications, or adhere to treatment regimens.

People with mobility impairments are not able to walk miles between service providers, carrying their belongings with them. People at high risk of falls are not well served by bunk beds or by bathrooms in shared facilities that do not have grab bars and slip-resistant floors.

Shelter and housing providers are grappling with the need to provide clients with personal care assistants to enable them to handle activities of daily living, like bathing and dressing. They are reporting difficulty with clients whose cognitive impairments make them unable to understand or follow rules.

Many Medicaid programs will cover the costs of personal care via the Home and Community Based Services Program, which is designed to keep Medicaid recipients living at home and in the community instead of in expensive institutional care.

However, it is nearly impossible to arrange these services for people living in temporary shelters or in the street.

While there is little data, our study suggests that many older homeless adults will require nursing home placement, some of which could have been avoided with housing and home-based services.

Two years into our study, many of our participants have already spent extended time in nursing facilities.

Death on the Street

We have known for years that homeless people are likely to die prematurely.

When the homeless population was younger, these deaths were mostly attributable to substance use, violence, and infectious diseases.

Older homeless adults die at a rate four to five times what would be expected in the general population but die from different causes than do younger homeless adults. They die from the same causes as do other people—heart disease and cancer—but they do so 20 to 30 years earlier.

In the course of our study’s two years, for example, 14 of our 350 participants have died. Others are very ill and, we fear, will die soon.

To put it bluntly, as a society, we face the specter of older adults dying on the streets.

Our argument is that there is no one-size-fits-all solution.

An individual who has spent 30 years rotating between institutional care and the streets requires different services than a 54-year-old man who has become homeless for the first time after a period of extended unemployment.

To solve the problem of homelessness among older Americans, we will have to find answers to two questions.

How do we adapt existing programs for homeless adults to meet the needs of an aging population?

And possibly even more intractable but fundamental: how do we stop older people from losing their homes?

Margot Kushel is a professor of medicine at the University of California, San Francisco. This article was previously published on The Conversation.