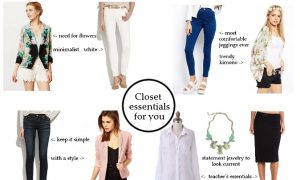 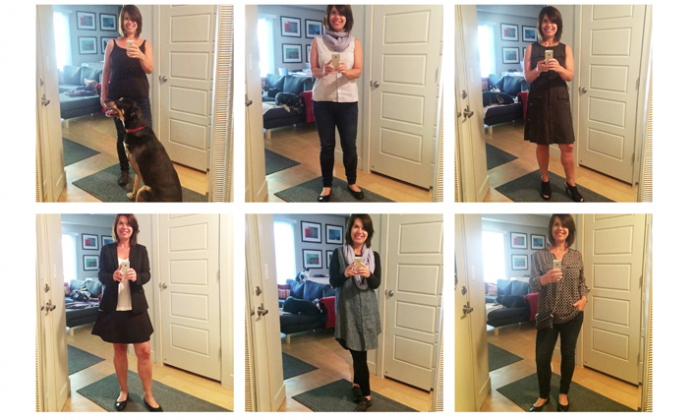 Finally, people are beginning to embrace the idea that less is more. The international success of Japanese organizing consultant Marie Kondo is proof that there is an overwhelming demand for a tidier living space. In addition, a slew of minimalistic lifestyle blogs have surfaced in the past few years to teach people the art of decluttering their closets, and their lives.

Part of this phenomena is the popularization of the “capsule wardrobe,” an idea that originated in the 1970s but resurfaced in the past few years. A capsule wardrobe is compact, with only the essentials. Each piece should be able to work with others, allowing for a variety of combinations. Ideally, items in a capsule wardrobe are high in both quality and versatility—very Parisian. But as it turns out, having a capsule wardrobe is more than just about looking chic—it’s also a way to feel healthier.

One Woman’s Search for Health and Simplicity

When she first decided to create her own capsule wardrobe five years ago, it wasn’t about fashion. Carver was already on a journey to discover simplicity after getting diagnosed with multiple sclerosis in 2006. To encourage herself, she started a blog called “Be More With Less,” and wrote about the art of simple living.

“My life was so crazy and busy,” said Carver. “I was working all the time. My schedule was jammed, I was always on my phone, eating lunch in the car, and in this huge hurry, and so was everyone else around me. While I don’t believe that that caused my MS, I think it exacerbated a lot of the symptoms.”

All the things she had purchased in an attempt to feel better actually caused her to become more stressed.

At the same time, she relied heavily on shopping to de-stress, frequently checking her email for sales or hitting the mall.

“It was a prominent part of my life, but because it had been going on for so long it felt normal,” she said. “I didn’t realize how damaging it was, how much attention I was spending on what the next best thing is to buy.”

In her research, Carver found that stress is a huge factor in disease. And all the things she had purchased in an attempt to feel better actually caused her to become more stressed.

“My goal was to eliminate as much stress as possible in my life,” she said.  “While I initially didn’t think of my stuff as stress, it was, because it was this constant reminder of the craziness in my life. Reducing that stuff really reduced my stress.”

She had already started to declutter other areas of her home slowly and steadily, but Carver wanted to do something more drastic while not affecting other people in her household.

The hardest place I could imagine simplifying was my closet.
— Courtney Carver

“The hardest place I could imagine simplifying was my closet. I thought if I could conquer that or make some headway there, the rest would be a cakewalk.”

Carver decided to challenge herself by wearing only 33 items for three months. The items included clothing, accessories, jewelry, outerwear, and shoes. She launched the website Project 333 to document her progress. On the Project 333 website, as well as on her blog, Carver advises readers on things they can eliminate from their closets, and how to make more space at home.

Initially, there were many concerns. Others might think she was crazy. People at work might notice. In the end thought, all the worry was for naught.

“Interestingly enough, nobody noticed,” said Carver, who was working in sales at a luxury publication at the time.

Every three months she reviewed the items in her closet and planned for the next season, taking into account weather and upcoming events. Half of her existing wardrobe is transferred over with seasonal pieces rotated in. Unused items are donated. Everything else is kept in one additional container for storage—but Carver admits that it took her years to whittle it down to one box.

“There were just a lot of attachments when your things are right in front of you, but when you put them aside, you really have a chance to distance yourself and see if they’re really a good fit for your life,” said Carver.

Out of sight, out of mind. After a few months of separation from these clothes, Carver discovered that she didn’t really miss them. As it turns out, even with a closet full of clothes, we still wear the same handful of items.

“I have so much more ease and clarity in my day,” she said. “Not only is it easier and more enjoyable to get ready in the morning, because I am choosing from a small selection of my favorite things – things that fit me well, and fit my lifestyle too, but I also don’t spend time at the mall medicating myself with shopping, or feel like I always need to buy something new for different events. I have enough.”

The project was a hit.

In the beginning, approximately 100 people joined Carver in the capsule wardrobe challenge, participating and writing about it.

The point is to try something new if you’re unhappy with your current closet situation.
— Caroline Joy, blogger

“That gave me a lot of inspiration and accountability to stick with it,” she said. “And now five years later, there are thousands of people around the world in 50 plus countries giving it a try.”

Project 333’s Facebook page now has 26,000 likes with various participants posting advice and suggestions on how to dress with less.

Since the launch of Carver’s blog and Project 333, many other bloggers have followed suit.

Caroline Joy launched the blog Un-Fancy last year to document her experience with the capsule wardrobe. Her version includes 37 pieces, but she tells her readers that it’s not about the number.

“The point is to try something new if you’re unhappy with your current closet situation,” Joy writes on her blog. “If 37 isn’t your thing, find a number that’s right for you … My hope is to have great clothes that I enjoy wearing and use the time I would have spent shopping for something that’s more memorable + important to me.”

There’s also Anuschka Rees who runs the blog “Into Mind,” where she not only talks about building a minimalistic wardrobe but also about how to apply a minimalistic lifestyle.

Tips she gives include “reserve your closet space for items that you love 100 %” and “develop a strong personal style and perfect your signature look.”

A Scarf Can Mean Many Things—But Above All, Prestige

Closet Essentials for the Rest of Us

“Forget conventional style typologies like ‘classic’ or ‘bohemian’ and create your own unique look,” Rees writes.

Carver is happy to see the movement taking off.

“I am happy it’s inspired people to create their own version,” she said. “I always invite people to break the rules rather than dismissing the project. If Project 343 works better for you, then try that. But it’s just an invitation to experiment within your own wardrobe and life. I think however people express that is fantastic.”

Beyond Fashion and Personal Benefits

I can honestly say that I haven’t missed one thing that I’ve gotten rid of.

“It really changed my whole life but it also made everything else easier to let go of,” she said. “Once I had that confidence of dressing with less, I knew that I could quite easily live with less.”

Two years ago, Carver and her family sold their house and downsized to a smaller place with no storage.

“I can honestly say that I haven’t missed one thing that I’ve gotten rid of,” said Carver.

“My lifestyle changes combined with a great neurological team—I’m virtually symptom free. I’m healthier than before my diagnosis,”  she said.

“The feedback that I hear goes so much deeper than ‘I stopped shopping’ or ‘I can get dressed more easily in the morning,'” said Carver. “[People tell me] ‘I’m a nicer person to be around and it’s improving my relationships,’ to ‘it’s completely reversed my anxiety disorder’—things that I never expected in the beginning—but have demonstrated time and time again that this project has very little to do with clothes and hangers or fashion.”

On a larger scale, Carver believes that the capsule wardrobe is another step toward sustainability.

“We’re reducing our footprints by not consuming as much, with people being very focused on sustainable fabric and buying quality over quantity,” she said. “I think just the simple step of dressing with less makes a huge impact.”

Carver says the project is simply an experiment. Some may decide that it’s just not for them, while others will choose to stick with it.

“I think because of the stories that are being told—now that we have such a thriving community online—and the versatility of the project that’s being promoted, I don’t think it’s a trend. I think it’s a meaningful way to pay attention to the things that are most important in your life.”

A Beginner’s Guide to the Capsule Wardrobe

Capsule wardrobes can be tailored to fit individual needs. A corporate employee might have two capsules, one for work and one for home. The Pretty Blog has a detailed post on how to build a versatile capsule working wardrobe. On the other hand, a pregnant mother might have a capsule for the different stages of her pregnancy.

How to Get Started on Your Capsule Wardrobe (Carver’s Advice)

Keep it simple
“All my pieces are pretty straight forward and there’s nothing with a lot of embellishments.”

Choose items that can be both dressed up and dressed down
“I discovered that I could tone my professional look down just a bit and tone my casual look up just a bit, and find something in the middle that I could wear. I could wear a shirt and jeans on the weekend and wear the same shirt with a blazer and a skirt, for instance, during the week.”

Take care of your clothing
“I try to wash items on cold, I line dry as much as I can, which is great not only for your clothing, but for your energy bill.”

Take the time to figure out what you like
“If you’re going to make any kind of investment, make that after the first three months.”

Put extra things in storage in the beginning
“I didn’t want to give everything away and then realize this isn’t working. I just wanted to remove that fear and that’s what I suggest to the people that want to try it. This is only for three months if that’s what you want it to be. But give yourself that separation from your things so you can see what is enough for you, and what you really need, and how you really feel about your stuff.”