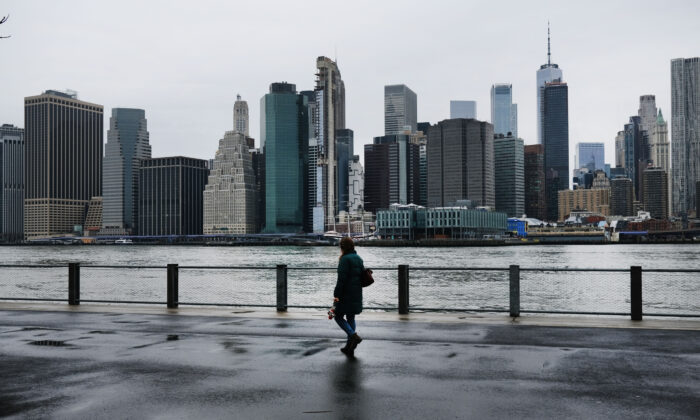 A person walks in Brooklyn while lower Manhattan looms in the background in New York City on March 28, 2020. (Spencer Platt/Getty Images)
Viewpoints

How My View of the Holocaust Was Altered During COVID

The Holocaust has always been a part of my life, personally and/or professionally, since about the age of 7. I say “about” because that was a long time ago and I could have been 6 or 8. In any case, it was the very early 1950s, not much more than half a decade after the liberation of the camps.

Back then, I would occasionally accompany my father, a radiologist, to his office. Mostly, I would hang out in the developing room and watch the X-rays come up, but one day, my father interrupted and marched me over to one of the nurses.

“Mrs. Mindus, would you show Roger your arm,” he said—something like that anyway—because I remember distinctly Mrs. Mindus, a sweet Eastern European woman whom I thought agéd (she was probably about 40), proceeding to roll up her sleeve.

For the first time, I saw the numbers the Nazis tattooed on prisoners at Auschwitz.

Even now, I can see them in my mind’s eye. They were imprinted there forever.

I learned shortly thereafter that several more of the nurses and technicians in the office were Holocaust survivors. My father had made an effort to employ them.

But naturally, as a little kid, I wondered … concentration camps? … gas chambers? … How could anyone do such a thing?

So I grew up, although I tried to know better, fearing and disliking German people. In 1968, I found myself in Hamburg, en route to Amsterdam, and spent a sleepless night in a bed-and-breakfast, fantasizing I was about to be arrested as a Jew by the Gestapo. I bolted out at dawn, anxious to get as quickly as possible to Holland, where I paid my first of several visits to the Anne Frank House.

Eventually, however, that attitude changed. Several books from my Moses Wine detective series, including one set in Israel, were translated into German and were relatively popular there. I met the translators and publishers in the United States and later in Berlin, hanging out with them and other local literateurs in their cafes. They weren’t so bad; they were often witty, the usual artsy types with the usual quirks. They were like us.

But, in some ways, I was more confused. Who could have done such a thing? These were normal people. Were their parents and grandparents so much worse?

At the same time, I was doing better in Hollywood (before I came out as a conservative and killed it all). Almost by accident, I wrote two feature films with Holocaust themes (was it really an accident?), one of them, “Enemies, A Love Story,” based on the Isaac Singer novel—a critical success, nominated for Academy Awards. Ironically, it was set among Holocaust survivors in New York in 1949, almost the same time I, as a little boy, saw the numbers on Mrs. Mindus’s arm.

Naturally, I had done considerable reading for those screenplays and met with a number of survivors, yet still I had trouble understanding how modern nations filled with a civilized, often highly educated populace could turn so extraordinarily barbarous.

I understood in books and movies, but not in a real way, not in life. I assumed you had to have been there at the time to do that.

I’m speaking, of course, of what we’ve experienced in our lives during the pandemic, if that’s what it was. More accurately, I would call it, in the words of this media company, the time of the CCP virus.

What we have witnessed throughout the world is millions, really billions, of people taking orders without thinking or, in the majority of cases, even seriously investigating what they’ve been told.

In a personal survey of those who have most willingly and unquestioningly accepted the vaccines (if that’s what they are), worn masks, and lived obediently under lockdowns as if that were the only way to survive, I have met absolutely none who have read the works of Robert F. Kennedy Jr., Alex Berenson, or Dr. Scott Atlas, or heard the lectures or seen the readily available videos by the likes of Drs. Robert Malone, Peter McCullough, Harvey Risch, or Vladimir Zelenko, not to mention many others, including the august group that signed the Great Barrington Declaration. Many don’t even know what it is or even that it exists. They certainly haven’t read the statement, although it’s only a few pages.

That’s right, none. Zero. Even though, in the case of the books, the works of the first three authors are bestsellers. And, yes, they may have seen them bashed on CNN or some other “reliable scientific source.” But that’s about it. Read for themselves? Why do that when they are told it’s nonsense? Sound familiar, “meine Damen und Herren?”

We live in a culture of pervasive obedience, what has recently been called mass formation psychosis, but you don’t need a fancy term to see it. It’s everywhere—people giving up their personal agency, even their ability to reason, out of fear and willingly adhering to the mass.

A generation of conformists has been created as never before in our history. This is more like Nazi Germany or, for that matter, communist China, than we would like to admit.

I’m not implying these mass conformists would accept concentration camps, not at this point anyway, but they did allow their children to be vaccinated with a compound whose eventual results are barely, if at all, understood, and to send those same children to school with masks on (if they go at all), unable even to see each other’s faces, to read each other’s expressions, to see each other smile.

This has been a form of national child abuse beyond conception, our own progeny headed to the most uncertain of futures with their normal developmental processes distorted beyond recognition.

So, to answer my own question, I no longer have “trouble understanding how modern nations filled with a civilized, often highly educated populace could turn so extraordinarily barbarous.”

I have lived it, day to day—not anywhere near on the Holocaust level, of course, but enough to know.

I have also seen how good people can fight back. They succeeded during World War II, and they can succeed now. We just have to do it. At this moment, Canadian truckers are showing the way; there are many others, of course. We all must participate in our own ways, or we will be listening to a new version of this blood-curdling warning the great Kander and Ebbs wrote for “Cabaret”:

“Fatherland, Fatherland, show us the sign
Your children have waited to see
The morning will come
When the world is mine
Tomorrow belongs to me”