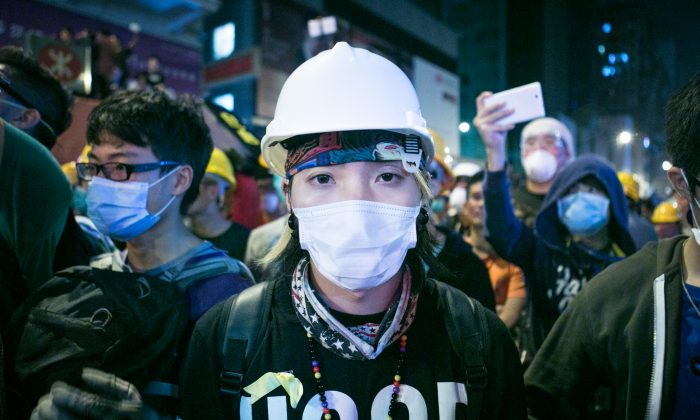 A protester wearing protective gear, is standing on the front lines of a face off between protesters and police in Mong Kok, Hong Kong, on Nov. 5, 2014. (Benjamin Chasteen/Epoch Times)
China

HONG KONG—A month ago, the liberal Chinese law professor Zhang Qianfan penned an essay urging Hong Kong’s students to pack up and get off the streets.

“The Wisdom of Democracy is Quitting When You’re Ahead,” the piece was titled. “If students in Beijing in 1989 could have left at the last minute, there would have been no excuse for a violent crackdown then,” he wrote.

In Zhang’s view, the students in Hong Kong reached their aims just by going out, expressing their views, and occupying roads for a week or so. Continuing the occupation risks turning it into “simply illegal acts,” he warned.

A month later, however, the students are still there—and they show no signs of going away. No one has dared predict an endgame to the movement, and both sides have seemed to reach a stalemate.

There are fewer numbers of people on the streets, however, and the colder weather is setting in. The student leaders that speak for the movement are no longer making several of the demands they started with, indicating that they might be happy to take a smaller concession from the government.

The title of Zhang Qianfan’s article in Chinese contains a meaning not present in the English: “jianhao jiushou,” meaning “if you see a good result, then pack up.”

A bookish protester, Jones Tam, who does advertising design at a fashion magazine, carefully read a paper copy of the essay presented to her, and took to task the idea that the activists had yet “seen a good result.”

“I think this ‘see a good result and pack up’ is a good idea, but the Hong Kong government hasn’t given us any good result to look at, and we don’t know how to pack up,” Tam said, mimicking the phrasing in the original statement.

She has been coming to Admiralty, the larger of the occupied zones around government offices, most days for the last month, spending hours after work on the site, as a demonstration of support.

“We had a dialogue with the government but it had no real content. Each side just repeated their talking points—there was no deeper discussion,” she said, referring to a publicly aired discussion held on Oct. 21.

She remarked that the Hong Kong government is in an “awkward” position, because it has no real power. “They just listen to the central government.”

The deadlock is simple: students demand “true universal suffrage,” meaning the right to elect a leader from a pool nominated by the public, rather than handpicked by a small group of the elite loyal to Beijing, as the situation currently stands.

They also want the abolition of so-called “functional constituencies,” where professions and economic interests are allotted voting blocks for the election of members of the Legislative Council and in the nomination of candidates for the chief executive election.

There have all along seemed to be only two ways the students will leave the streets: a bloody and sustained crackdown that is sufficiently violent to drive them off; or, alternatively, their key demand being met—the adoption of unfettered elections.

“The central government will not give in. They’ve stated that very clearly. But they also will not use violent means to suppress the movement. This is a dilemma,” said Andrew To, a former head of the League of Social Democrats, in an interview.

“This is not only a dilemma for the demonstrators, but also the government.” To said. “The two objectives are contradictory: you can solve it by peaceful means if you back down, or you can use violent means to disperse the crowds. I can’t see any chance that the people will go away otherwise. I think this could carry on for months.”

Pro-government politicians say there is no way that the Chinese Communist Party will give up its power to veto candidates it finds politically unacceptable.

“There is no chance of various sides reaching a compromise that will defuse this in a peaceful way,” said Tsang Yok-sing, a well-known pro-establishment figure and the president of the Legislative Council, in an interview with the Straits Times.

Bosco Wu, 16, a middle school student, said between puffs of his cigarette that there was no way that he and everyone else he knows at the Mong Kok protest site would leave without gaining concessions from the government.

“We’ve been coming to the streets for over a decade,” he said, referring to the regular marches and protest events held in Hong Kong throughout any given year. “The government never does anything. We want them to change now—the chance is small, but they have to do something.”

Wu, like many others, has adjusted to life as a long-term occupier. He volunteers at one of the supply tents in Mong Kok, the more working-class of the two main protest zones, refilling water bottles and handing out food to activists.

If there was a violent clearance, he admitted that “yes, we’d leave.” Then added: “But we’ll come right back.”

While initial demands by the students groups were unyielding, it’s possible that at this point, a sufficiently large proportion of protesters may accept a second-best option: promises by the government for a timetable to bring greater democracy to the nomination process.

“I think a significant number of people would not come out to the streets again if the government made a realistic promise and provided a timetable,” said Kist Chan, 25, a protester who demonstrated close knowledge of the constitutional questions at play and a strong commitment to the movement. He has been coming to Mong Kok and sleeping overnight for nearly a month.

Accepting a timetable is much less than the initial demand, but students have already backed away from earlier demands, which included the resignation of Leung Chun-ying, the chief executive, and the retraction of the National People’s Congress Standing Committee decision of Aug. 31, which set in place the framework that has frustrated so many here.

“You want me to pick an apple to eat, but you’ve only given me rotten ones to choose from,” said Chan, characterizing how the NPC decision made him feel. “There are good ones I can eat. Why do I want to eat a rotten one?”

“If they gave us a plan in which they laid out for us how they’re going to eventually give us the right to choose our own leaders, that would be OK. Even if they cheated us,” he said. “Right now, they won’t even cheat us.”

Another possibility, of course, is if Xi Jinping steps in to resolve the crisis himself directly.

The potential for such an outcome may present itself after the Hong Kong government submits another report to the Chinese Communist Party—which Carrie Lam, the chief secretary, promised to do—that accurately reflected the public’s frustration and sentiments.

In this optimistic scenario, Xi Jinping and the top communist leadership could then use this as a cover to retract the original decision by the National People’s Congress Standing Committee, which is headed by Zhang Dejiang, an ally of Xi’s political opponent Jiang Zemin, a former leader of the Chinese regime.

Despite Xi Jinping’s sweeping anticorruption campaign and purge of powerful opponents, including Zhou Yongkang, the former security czar, and Xu Caihou, formerly the second most powerful officer in the military, he has not still not fully consolidated power over all parts of the Party and government apparatus.

This line of analysis has appeared in Hong Kong and overseas political journals, and appears to be accepted knowledge among the politically aware in Hong Kong. Some of Jiang Zemin’s holdouts, including Zhang Dejiang, are still able to pursue policies detrimental to Xi’s interests. Leung Chun-ying, the chief executive, is known to have ties to the broad political network associated with Jiang Zemin.

Xi Jinping’s own messaging on Hong Kong has not been as hardline as the Zhang camp. Li Keqiang, his premier, was believed to be communicating Xi’s views last month when Li said “the people of Hong Kong have the wisdom” to resolve the crisis.

After retracting and amending the original National People’s Congress decision, Xi could conceivably present another interpretation, not as absolute, of how candidates for the position of chief executive could be nominated. He could then sack the widely-loathed chief executive Leung Chun-ying, as a token to the protesters, for Leung’s unseemly business dealings that came to light in early October.

The result would surely still include a level of control and veto of candidates by Beijing, but the conciliatory gestures may be enough to defuse the crisis without bloodshed. This scenario, which right now seems rather far off, would of course require Hong Kong’s protesters to stay right where they are—out on the streets.