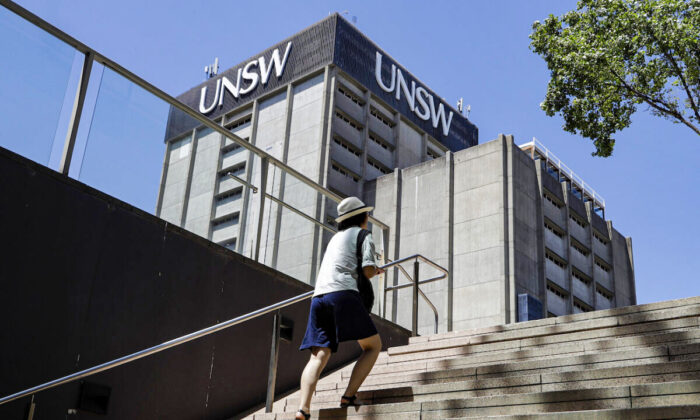 A student walks around the University of New South Wales campus in Sydney, Australia, on Dec. 1, 2020. (AP Photo/Mark Baker)
Thinking About China

How Did Australian Universities Help Beijing Advance Its Goals

An Australian Parliamentary committee on security and intelligence has concluded that the Chinese communist regime targeted Australian universities as part of a huge two-pronged exercise to firstly transfer Western knowledge and technology into China and secondly to deploy spies into the West.

Australian universities allowed themselves to be infiltrated and used, but this is not just an Australian problem. Rather China has run this exercise across the Western world, especially in Anglo-sphere countries.

Examining what happened in Australia serves as a case study of how naïve university managements were suckered into helping the Chinese Communist Party (CCP) grow itself into an aggressive global actor.

It is worth starting by asking why Beijing targeted the universities. What does it want?

It seems Beijing wanted four things that the universities could help them get. Most important was technology transfer. China has been playing catch-up with the West and Beijing realized it could speed up China’s development by getting its hands on Western intellectual property and knowledge.

The Chinese regime is not as good at developing new ideas as the West, but it is very good at building quality products once they have plans. So the CCP turned to data theft (using cyber warfare) and to infiltrating Western universities.

Secondly, Beijing needed to build a network of intelligence agents across the West. University students provide excellent cover for deploying spies. And because many Chinese students are allowed to stay on as migrants, Beijing discovered that this was a great way to create large permanent intelligence networks plus export large numbers of CCP-supporters to countries like Australia.

Beijing learned to turn Western policies of mass immigration and multiculturalism into tools that the CCP could use to build China’s influence. And once Beijing invented a way to turn these students into Western-based academics it had the perfect model for intellectual property transfer.

Thirdly, Beijing’s hybrid warfare model of sowing discord in target societies required deep knowledge of local cultures in places like Australia, USA, and Canada. Sending hundreds of thousands of students was a way to collect this knowledge about weaknesses and divisions in Western societies. Further, these students also became proficient in English, an important skill for any hybrid warfare operative.

Fourth, Beijing spent a fortune building soft power mechanisms that were given the task of spreading messages of a benevolent and friendly communist China, plus cultivating China-friendly opinion leaders across the West.

Not surprisingly, Confucius Institutes were built on university campuses to help cultivate friendly academics, journalists, and teachers in targeted countries.

A bonus of this CCP-funded perception-shaping strategy was that the heads of these Confucius Institutes were appointed to important internal committees within Western universities from which they could then influence curricula and policy.

The point is, the CCP was incredibly successful in suckering Australian university managements into becoming compliant partners in building Beijing’s influence not just on university campuses, but across Australian society as a whole.

It is instructive to unpack how and why Beijing was so successful at getting university management and academics to play along and at gaming Australia’s university and research system.

Given that university management and academics are supposed to be so clever, one is left wondering how they could be so gullible?

Turns out those running Australia’s universities were naïve globalists—unrooted cosmopolitans and believers in the “one big human family” idea.

These academics saw all humans as trusted partners in building their lefty dream of a peaceful globalized world. It never occurred to them that the CCP does not play by the same rules.

So what games did Beijing play to turn Australia’s universities into compliant agents of China’s expansionist foreign policy, such that these universities became important portals for CCP infiltration and influence into the wider Australian society?

Grasping how so many of Australia’s university managers allowed themselves to become tools of the CCP requires understanding something about the managerial culture of these universities.

The Chancelleries of Australia’s universities have a cultural problem that Beijing learned to exploit. These Chancelleries have become creatures of the swamp by growing into large bureaucracies of Vice-Chancellors, Deputy-VCs, Pro-VCs, Provosts, and innumerable bureaucratized advisors.

One might say Beijing’s apparatchiks and the Chancellery apparatchiks discovered each other as ideal partners.

Dawkins was bad for students wanting quality education and bad for those wanting to be real academics. But was good for educrats who built careers by attending endless meetings, designing tick-a-box forms, and running (ever-growing taxpayer-funded) bureaucracies whose job it was to ensure that the forms were ticked.

Dawkins also turned out to be good for the flood of international students who were happy to come to a degraded university system that provided them with back-door immigration visas. Further, Dawkins was also good for Beijing because the educrat-managers turned out to be willing and compliant partners for a CCP desiring influence over universities.

The point is, that Australia’s Chancelleries are filled with administrative gamers. And rather than being interested in knowledge, ideas, quality education, and quality research, these educrat-gamers became interested in building their own empires (because empire size determines salary size).

Turned out the quickest way to empire-build was to recruit huge numbers of mainland Chinese students. To do this, Australian universities learned how to please Beijing, which set in motion many visits to China to learn “what the Chinese wanted.”

The CCP quickly set up a junket operation that entertained Australian professors and managers with five-star luxury as they got to experience the delights of China while learning how to please Beijing.

Some of the Shanghai criteria concerned what Beijing wanted for its students. But other criteria involved research. Australian universities were rewarded if their academics engaged in co-research projects with China-based academics.

Australia’s Chancelleries soon worked out they could increase Beijing’s pleasure by employing academics from mainland China who then built research partnerships with former colleagues back in China. These academics were then eligible to apply for Australian research funds.

Hence, one ended up with research teams at Australian universities, funded by Australian taxpayers, but doing research useful to Beijing. This research scam was further intensified by Beijing’s Thousand Talents program.

On the other hand, Australian taxpayers should be less than impressed with how a swamp of highly paid educrats working in Chancelleries allowed Australian universities to become highjacked by those building the CCP’s power.