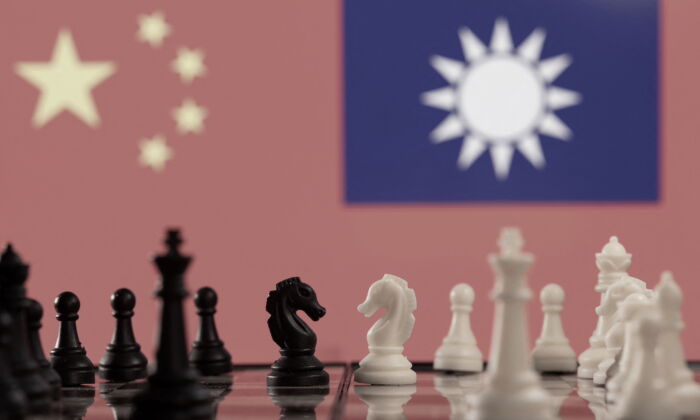 Chess pieces are seen in front of displayed China and Taiwan's flags in this illustrative photograph taken on Jan. 25, 2022. (Reuters/Dado Ruvic/Illustration)
Americas

How China Is Systematically Isolating Taiwan in Latin America

The geopolitical power dynamic between China and Taiwan is exemplified in how international relations are unfolding in Latin America. China continues to extend its influence in the region through trade and investment while systematically alienating and undermining Taiwan’s dwindling number of allies in the process.

Although its allies in the region are diminishing, Taiwan is working to strengthen ties with friendly countries such as Paraguay, Honduras, Guatemala, and Belize.

Presently, there are only 14 countries in the world that recognize the island nation’s autonomy.

On March 31, a delegation from Paraguay met with Taiwanese President Tsai Ing-wen and signed two memorandums focusing on the promotion of investment and exports and the prevention of African Swine Flu, as well as a letter of intent on industrial policy cooperation between the nations.

Agriculture and livestock officials, ​​along with members of the Paraguayan Industrial Union, were also present during a series of discussions between March 28 and April 1.

Tsai said she hoped the two countries would comprehensively deepen and strengthen relations between them and jointly promote prosperity and development.

The head of state also noted that since the economic cooperation between Paraguay and Taiwan went into effect in 2018, both countries have enjoyed continuous growth in bilateral trade.

During the worst of the COVID-19 pandemic, Taiwan was quick to offer support to friendly nations in the Americas.

Officials representing Honduran President Xiomara Castro also pledged to support Taiwan last December, which is a notable shift in attitude from her campaign promises to further develop relations with China. The island nation also donated $3 million in aid to Honduras during the height of the pandemic in 2020.

Analyst Fernando Menéndez told The Epoch Times that when it comes to creating partnerships in the region, China has an obvious advantage because of the sheer size of its investments.

“The goal of Latin American countries, ultimately, is to industrialize. China came along and helped make that happen,” he said.

Beijing invested a total of $83 billion in Latin America from 2005 to 2020, according to the Economic Commission for Latin America and the Caribbean.

As of 2020, the China Development Bank and the China Export-Import Bank granted 94 loans amounting to $137 billion, the majority of which went to Venezuela, Brazil, Ecuador, and Argentina.

This translates into substantial yet subtle influence over governments in the region.

“This historic meeting between the governments of the People’s Republic of China and the Republic of El Salvador has produced excellent results. This confirms that the establishment of diplomatic relations with China is the most important decision of my government in foreign policy,” Cerén said at the time.

In December 2021, Nicaragua followed suit and broke relations with Taiwan in favor of China. Foreign Minister Denis Moncada was blunt in his response to the sudden shift toward China in diplomacy.

“The government of the Republic of Nicaragua recognizes that there is only one China in the world. … The People’s Republic of China is the only legitimate government that represents all of China,” Moncada said.

By way of thanks, China pledged more than $500 million to help develop Nicaragua’s electrical infrastructure.

China giving or lending large cash infusions to countries shortly after they renounce Taiwan has become an established trend in Latin America.

This is how Beijing gradually but continuously sways struggling nations: by using the same “dollar diplomacy” the United States has been criticized for employing.

Hoffman said the tactic is colonialism by any other name.

“They [China] entered as all other capitalist and colonial foreign entities have in the past,” he said. “They say they’re different, but the approach is the same.”

Beijing hasn’t been discreet when expressing its sentiments about Taiwan, which it considers to be a rogue province.

During the National People’s Congress on March 7, 2021, Chinese Foreign Minister Wang Yi said, “Taiwan will eventually return to the embrace of the motherland.”

Moreover, China’s strategic moves in the region have turned heads in Washington, and some experts say this is an issue of national security.

Analyst Evan Ellis said China’s funding of authoritarian populism close to U.S. borders creates a significant threat. Second to that is the possibility of an increased presence of other U.S. rivals growing their presence in the region, such as Russia and Iran.

Concerns over China’s burgeoning influence were expressed in a November 2021 congressional report, which took special note of the deepening of China’s strategic political and military relationships with authoritarian regimes in the Americas.

There was mention of “democratic backsliding” being exceptionally prevalent in Bolivia, Ecuador, and Venezuela.