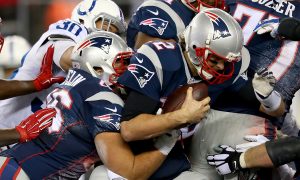 How Brady’s Situation Now Is Similar to 2001

Tom Brady has been suspended for the first four games of the 2015 season—that much we know.

The spotlight now shines directly on his backup—second-year quarterback Jimmy Garoppolo—who will likely fill in for the two-time MVP in a situation similar to what the Patriots went through 14 years ago.

But who is Garoppolo?

Garoppolo was the team’s second-round pick in 2014 out of Eastern Illinois—an FCS school whose most famous sports alum is fellow NFL quarterback Tony Romo. Garoppolo made a name for himself at the school too, though. The now 23-year-old broke all of Romo’s career records as well as all of the Ohio Valley Conference records.

The four-year starter was especially hot his senior year when he threw for an incredible 5,050 yards and 53 TDs, while getting picked just nine times in 568 attempts. The 2013 Walter Payton Award winner then shined during last year’s preseason with the Patriots, completing 46 of 72 passes for 618 yards and five TDs against just one interception.

During the regular season last year, he mostly rode the bench behind Brady, throwing passes in just three games. Still, his accumulated stats—19 of 27 passing for 182 yards and a TD against no interceptions—have only added to his rising value.

Yet, the biggest test will be when he has to lead the Patriots this fall.

The whole thing is actually similar to how Brady got his start with the Patriots back in 2001.

A sixth-round selection in 2000, Brady had a good preseason showing later that summer in the preseason contests but rode the bench behind the incumbent, Drew Bledsoe, for the duration of the Patriots disappointing 5–11 season—still Bill Belichick’s worst in New England. But in 2001, Brady’s second year, Bledsoe was knocked out by linebacker Mo Lewis—of the rival Jets—in just the second game of the season. With Bledsoe—who earlier that season had just signed the richest NFL contract ever—sidelined, Belichick turned to Brady, who subsequently turned the team around.

So impressed was Belichick with Brady that by the time Bledsoe was ready to return in mid-November, the now-legendary coach stuck his neck out and opted instead to stick with the little-known Michigan product over the three-time Pro-Bowler Bledsoe. It was the right call.

The rest is history as Brady led New England to six straight wins to close out the season at 11–5 and then three more postseason victories as the Patriots won Super Bowl XXXVI.

The difference here, though, is that Brady, despite whatever his role in Deflate-Gate was, has won four Super Bowls with the Patriots and is revered in New England—as opposed to Bledsoe, who was a good quarterback but never quite graduated to that All-Pro status. He was slow and had trouble avoiding the sack—which would explain how Lewis got such a good hit on him.

But who is Brady? Did he actually benefit from any of the alleged deflating of game balls?

The stats think so—sort of.

He was mostly known as a guy who delivered in the playoffs but didn’t put up flashy regular-season numbers.

But in 2007, after Brady and other quarterbacks had successfully lobbied the NFL to allow opposing quarterbacks to bring their own balls to road games—as opposed to having the home team provide them—his numbers jumped off the charts immediately. Brady threw an NFL-record 50 TD passes and captured his first MVP award that same season.

Of course, there were other factors in play. The Patriots acquired future Hall-of-Famer Randy Moss in 2007, who immediately became the best receiver Brady had ever worked with. That alone would enhance his numbers enough to raise doubts about how much he benefited from the rule change.

If he did benefit from the change and used underinflated game balls to his advantage, we would likely see a drop-off in his numbers later this year, after the four-game audition by the highly regarded Garoppolo.

Would Belichick ever bench an underperforming Brady? Not likely. But few saw the Bledsoe benching coming.