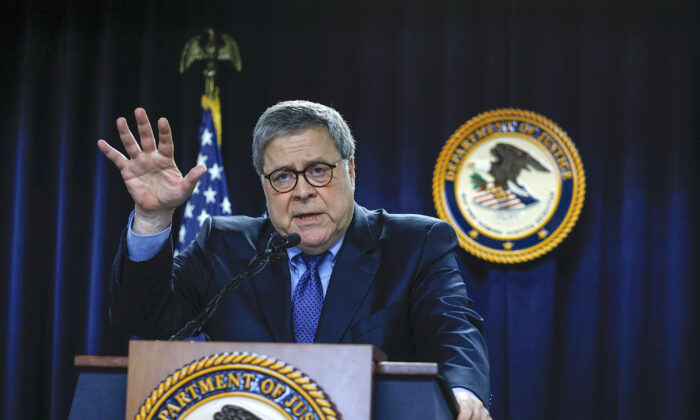 How Bill Barr’s Silence Affected the Outcome of an Election

On May 18, 2020, then-Attorney General Bill Barr made a statement to the media declaring that special counsel John Durham’s investigation into the origins of the Russiagate hoax wasn’t focused on either former President Barack Obama or former Vice President Joe Biden, stating that “I don’t expect Mr. Durham’s work will lead to a criminal investigation of either man.”

In his new book, Barr has revealed that he made that statement in response to a series of tweets by then-President Donald Trump. A week earlier, Trump had started using the term “Obamagate” on Twitter, alleging that both Obama and Biden had “led the charge” on the FBI’s phony Russiagate investigation.

Barr recounts in his book that he felt it was unacceptable for Trump to attempt to drag his presidential election opponent into the Russiagate scandal and that Barr felt that it was incumbent upon him to make a public statement.

The corporate media immediately seized upon Barr’s statement, with The Washington Post running a same-day headline that “Barr says he does not expect Obama or Biden will be investigated by prosecutor reviewing 2016 Russia probe.” The New York Times’ headline went further, claiming that “Barr Dismisses Trump’s Claim That Russia Inquiry Was an Obama Plot.”

Barr’s May 18 claim is an often underappreciated statement, the fallout of which was felt throughout the 2020 presidential election. Although Barr now claims that he issued his statement from a position of fairness, what he actually did was insert himself and the Department of Justice (DOJ) into the presidential campaign, and in doing so, he set the stage for the media’s whitewashing of questions of corruption that swirled around Biden throughout the campaign.

It’s also worth noting that Barr’s decision to make a public statement contrasts sharply with former FBI Director James Comey, who claimed that as a matter of DOJ policy, he wouldn’t confirm or deny if President Trump was actually under investigation in 2017.

More importantly, Barr’s May 18 statement stands in stark contrast to his decision to remain silent after the second presidential debate in October 2020, when Biden falsely blamed the story about his son Hunter’s laptop on a “Russian plot.”

Barr recently recounted that he “was very disturbed during the debate when candidate Biden lied to the American people about the laptop.” Barr told Fox News in an interview that Biden “was squarely confronted with the laptop and he suggested that it was Russian disinformation. … And I was shocked by that. … When you’re talking about interference in an election, I can’t think of anything more than that kind of thing.”

Barr’s supposed “shock” over Biden’s claims of Russian disinformation during the debate begs a simple question: If Barr actually felt that Biden’s assertions of “Russian disinformation” amounted to “interference in an election,” why didn’t Barr say anything at the time?

The only discernible action taken by Barr’s DOJ was an Oct. 20 written reply from an FBI congressional affairs liaison to Sen. Ron Johnson (R-Wis.). That letter, which preceded the second debate, was intentionally vague, and, rather than countering potential narratives, it allowed the media to advance Biden’s claim that the laptop was a Russian plot. Crucially, the letter took pains to conceal that the FBI had physical possession of Hunter’s laptop at the time the letter was written—a fact that eliminated any possibility of a Russian plot.

During the second 2020 debate, Biden asserted that his claims of “Russian disinformation” were backed by our intelligence agencies by citing a letter written by Obama-era intelligence officials such as former CIA Director John Brennan, former Director of National Intelligence James Clapper, and former CIA Director Leon Panetta. That letter was issued on Oct. 19, 2020, just days before the debate on Oct. 22, 2020, and was widely circulated by the media as proof of Biden’s claims.

In their letter, the intelligence officials claimed that the information from Hunter’s laptop had “all the classic earmarks of a Russian disinformation operation,” and stated that “this is Russia trying to influence how Americans vote in this election,” noting that “we believe strongly that Americans need to be aware of this.”

That four different CIA directors would be willing to publicly promote false allegations about Russia in order to shield a presidential candidate from public attention is particularly troubling. These former CIA directors—whose tenure spanned more than 10 years of U.S. foreign policy activity—invoked their government positions and lied to the American public in order to protect and get their preferred candidate, Joe Biden, elected.

During his recent interview, Barr conceded that he knew that letter from our nation’s intelligence officials “was baseless” and that he believed Biden himself fully understood that it “was a lie.” Unlike Trump, Biden was citing published claims by intelligence officials that Barr now says he knew to be inaccurate at the time those claims were made. But, in contrast to his earlier actions regarding Trump’s tweets, Barr chose to stay silent on Biden’s claims.

In doing so, Barr decisively interfered in the election through his inaction.

The sharply differing stances that Barr took in those months preceding the 2020 presidential election are puzzlingly contradictory. Barr apparently felt that it was necessary to make sure that U.S. citizens were aware that Biden wasn’t under investigation as a part of Durham’s probe, but he didn’t feel it was important to counter a false narrative from former intelligence officials, including four CIA directors, that Barr knew to be untrue.

At the time of that second presidential debate, the FBI already had Hunter’s laptop in its possession—and had held the device for 10 months. The FBI had also opened an investigation into Hunter Biden for multiple offenses—including allegations of money laundering and possible violations of the Foreign Agents Registration Act. Hunter’s laptop contained emails and other information that were directly connected to these allegations.

Barr’s differing treatment of Biden and Trump leaves many questions unanswered. Although many in the media, along with then-Biden spokeswoman Jen Psaki, have asserted that Hunter is a private citizen who wasn’t running for office, Hunter’s laptop directly implicated Joe Biden in a number of dubious foreign dealings. Biden repeatedly lied about these matters while on the campaign trail.

In one particularly notable instance, Biden had personally met with Hunter’s Ukrainian business partner only a few months before that same partner demanded that Hunter end the investigations into Burisma, the Ukrainian energy firm that was paying Hunter $1 million per year. On the campaign trail, Biden declared that he had never talked to his son about his foreign business dealings.

Not only did Barr choose to remain silent about Hunter’s laptop, but he had also, in fact, “instructed prosecutors and senior colleagues to prevent word of investigations into Hunter Biden from becoming public and keep the Justice Department out of campaign politics,” according to sources cited by The Wall Street Journal.

As we now know, Hunter’s emails and laptop are real. Indeed, shortly after the election, Hunter Biden suddenly released a statement acknowledging that he was under federal investigation.

The silence from Barr enabled the media’s blackout on the laptop story that had direct ramifications on the 2020 election. A poll by Media Research showed that 45 percent of the Biden voters were unaware of the allegations against Hunter and Joe Biden and that 16 percent of Biden voters–well over the margin of victory–wouldn’t have voted for him had they known this crucial information.

Barr argues in his book that Trump’s claims about Biden required Barr to insert himself because he didn’t want a repeat of the Russia collusion claims that plagued the 2016 election; that same argument, however, should have required Barr to speak out on Biden’s debate claims that Hunter’s laptop was a Russian plot.

If Barr was truly concerned about a potential repeat of the 2016 election, it would have been incumbent on him to step forward publicly as soon as Biden made his false accusations against Russia, particularly given the involvement of Brennan, who was himself entangled in the 2016 election interference.

The national security implications from Biden’s repeated invocations of Russia is another important factor that should have required Barr to act.

“Russiagate was not only a despicable dirty trick that hobbled the first part of the president’s administration, but it also affected [sic] great damage to the United States,” Barr acknowledged in his recent interview with Fox News. “Russiagate essentially froze the Trump administration from engaging with Russia.”

While Barr acknowledged the massive geopolitical damage caused by the Clinton campaign’s Russiagate hoax, he inexplicably ignored Biden’s false claims about his son’s laptop, which has served to undermine our national security in ways that are perhaps even worse than the actions taken by Clinton.

Both Clinton and Biden recklessly leveled false accusations against Russia, jeopardizing national security for their own personal and political gain. Clinton, among other things, had her 30,000 deleted emails to contend with. However, while no one has seen Clinton’s emails, the emails on Hunter’s laptop contain a multitude of damning disclosures of foreign dealings and payoffs involving the Biden family.

Beyond the direct ramifications from the emails on Hunter’s laptop, Biden’s fabricated accusations regarding Russia would have immediately been understood by the Kremlin as a fundamental weakness. There’s no doubt Biden’s statement worsened relations with Russia and might have contributed to the current situation in Ukraine.

By first speaking out and then remaining silent, Barr very directly put his thumb on the scale, leading to material ramifications for our country—including the geopolitical landscape we now face.