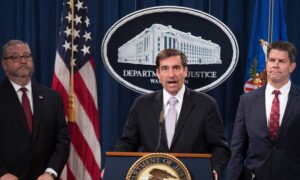 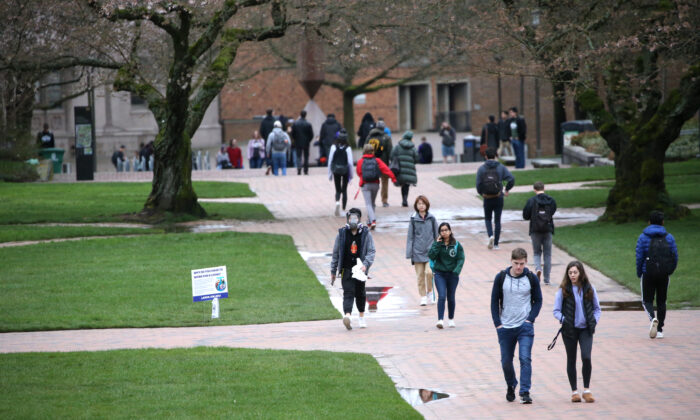 Students at the University of Washington are on campus for the last day of in-person classes, in Seattle on March 6, 2020. (Karen Ducey/Getty Images)
China-US News

The Chinese regime’s covert activities at U.S. universities have attracted increasing attention and concern as part of the Trump administration’s campaign to halt Beijing’s subversion of the United States.

In the past year, the United States has focused on Beijing’s efforts to steal American research by prosecuting academics who hide links to China, barring entry to graduate students affiliated with the Chinese military, and targeting undercover Chinese military scientists working at U.S. universities.

Meanwhile, the Chinese consulate in Houston was shuttered in July as the Trump administration asserted that the diplomatic post was a base for efforts to recruit local scientists to join Chinese talent plans. These programs have been criticized by U.S. officials for incentivizing participants to transfer U.S. technology and know-how to China.

But one facet of the regime’s influence activities that has drawn less attention is how it deploys Chinese Students and Scholars Associations (CSSA) to control Chinese students and suppress free speech on college campuses.

While the student groups, with chapters at more than 100 U.S. colleges, offer a social outlet for Chinese students adjusting to life in a foreign country, analysts say the organizations also serve a more insidious function: to advance the Chinese communist regime’s interests in U.S. academia.

“CSSAs are one branch of a very powerful tree—the center of which is the intelligence gathering, espionage, propaganda of the Chinese Communist Party,” said Jacob Kovalio, an associate professor of Asian history at Canada’s Carleton University.

The CCP has for decades worked in Western countries such as the United States to “spread the word about the ‘goodness’ of the regime as well as at the same time, establish significant propaganda channels directly from among some Chinese immigrants,” Kovalio says.

CSSAs are supervised by local Chinese consulates, he said, adding that the groups are a “major vehicle” through which Beijing transmits its propaganda on U.S. campuses, while also suppressing free discussion of speech critical of the communist regime.

Many CSSAs openly say or have previously stated they are directed, supported, or financed by local Chinese consulates.

The Chinese consulate’s grip over the Southwestern CSSA, an umbrella group covering 26 universities in the region, is even more blatant. Its charter says that CSSA presidential candidates must be approved by the Chinese consulate in Los Angeles. It also says that the group receives instructions from the consulate, and lists it as a point of contact on its website.

The Chinese regime’s control over CSSAs isn’t a recent phenomenon. Frank Xie, now an associate professor in the School of Business Administration at the University of South Carolina–Aiken, came to the United States in 1986 as a chemistry doctoral student at Purdue University in Indiana. He was shocked to discover that the CSSA there was “tightly controlled” by the Chinese consulate in Chicago.

“I wasn’t expecting that in a free society. You’re still controlled so tightly by the regime in China,” Xie said. “I wasn’t happy with this.”

Xie began pushing for reforms at the CSSA and eventually became vice president. Two years later, he led a “coup” to sever the consulate’s control. After the club became independent, the consulate ended funding and other support, he said.

It was then that Xie realized that the consulate had dispatched Chinese students to spy on him and other pro-democracy-minded students on campus.

“They were reporting our identities, our activities back to the consulate,” Xie said.

The professor said that after the regime’s bloody suppression of pro-democracy students in Tiananmen Square in June 1989, Chinese students in the United States, in solidarity with the protesters, took control of all CSSAs across the country, becoming independent from the consulates. But as that cohort of Chinese students graduated, the groups fell back into the hands of the CCP, Xie said.

Since then, the regime has “perfected this control and influence scheme” over Chinese students in the country, he said. Chinese students know they’re being monitored by CSSAs and consulates, and that their relatives at home may be threatened by authorities if they publicly voice viewpoints that aren’t in line with those sanctioned by Beijing.

“They constantly have this fear,” Xie said.

In 2017, Chinese student Yang Shuping felt the wrath of the Chinese regime after she praised “the fresh air of free speech” found in the United States but not enjoyed at home, in her commencement speech at the University of Maryland. That sparked a fiery backlash from the school’s CSSA, and other Chinese students and netizens, who described her comments as traitorous; she was forced to make a public apology.

The Epoch Times reported in 2018 that a 20-year-old female Chinese student at Carnegie Mellon University in Pennsylvania was summoned to a meeting with members of the university’s Chinese Student Association after criticizing the group in a private WeChat chat group between friends for promoting a violent video game following the deadly Pittsburgh synagogue shooting. WeChat is a popular Chinese social media platform.

The members warned her not to make trouble and demanded an apology for her comments, telling her, “You can’t talk this way in your friends’ circle,” the student said.

CSSAs in the United States and elsewhere have repeatedly sparked criticism over their attempts to cancel events or speeches hosted by overseas dissident groups, including Tibetans, Uyghur Muslims, and Falun Gong practitioners.

In 2017, when Tibetan spiritual leader Dalai Lama was scheduled to speak at the University of California–San Diego, the CSSA said in a social media post that it had asked the Chinese consulate in Los Angeles for instructions on how to stop the event.

In September 2019, Canada’s McMaster University banned its CSSA, citing the club’s violation of a rule prohibiting conduct that puts people’s safety at risk. The move came months after the CSSA protested a human rights event on campus that discussed the regime’s persecution of Uyghur Muslims in the region of Xinjiang.

The Chinese consulate in Toronto had asked students to report their observations about the gathering, and to have the CSSA complain about the event to university officials, according to WeChat group chats seen by The Epoch Times at the time.

But many of the CSSA’s efforts to suppress open discussion go unreported. Xie recounted an incident from around 2004, when he was teaching at Pennsylvania’s Drexel University. There, he got to know the Chinese students’ economic club at the University of Pennsylvania, and helped arrange for prominent U.S.-based Chinese economist He Qinglian to give a speech for Chinese students on campus. The economist, a contributor to The Epoch Times, is known for her critiques of the Chinese economy and political system.

The club’s president, however, came under pressure to cancel the event, Xie said, and ultimately pulled the plug. While the president wouldn’t acknowledge who was pressuring him, the professor said it was obvious that it was the work of the CSSA or the Chinese consulate.

CSSAs have also been linked with espionage activities. In the mid-2000s, the CSSA at a Belgian university acted as a front for industrial espionage for China, according to French newspaper Le Monde.

In another case from the 1990s and early 2000s, Canadian immigration officials accused Yong Jie Qu, a Chinese student association leader at Concordia University, of engaging “in acts of espionage and subversion.” Authorities said he identified pro-democracy students and reported information about them to the Chinese embassy.

Omid Ghoreishi and Joshua Philipp contributed to this report.