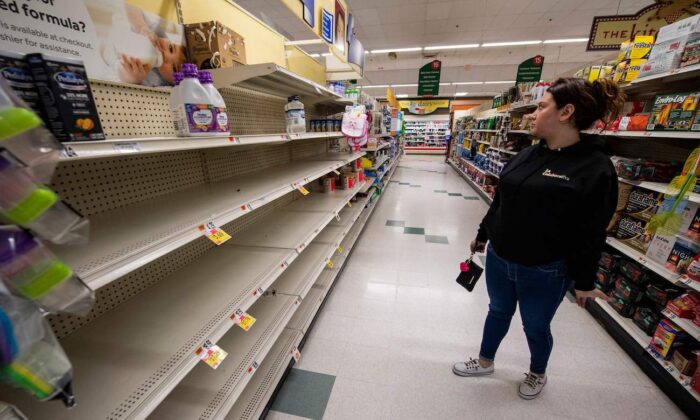 Shelves are empty of baby formula at a store in Chelsea, Mass., on May 20, 2022. (Joseph Prezioso/AFP via Getty Images)
Viewpoints

How Attractive Is Socialism Now?

In Charles Dickens’s much-loved story “A Christmas Carol,” the crotchety protagonist, Ebenezer Scrooge, is visited by three spirits. The third visitor, the Ghost of Christmas Yet to Come, gives Scrooge a sneak preview of how bleak and tragic his life will be if he stays on the same course.

Our country is on a course toward socialism. In the most recent presidential campaign, prominent Democrats such as Sen. Bernie Sanders (I-Vt.) and Rep. Alexandria Ocasio-Cortez (D-N.Y.) called for some version of socialism, while various Republicans denounced socialism. Wouldn’t it be helpful if, like Scrooge, we could have a preview of what socialism would look like in practice in the United States?

Of course, one can learn about socialism by studying the history of Russia, China, Cuba, North Korea, Venezuela, et al., but the pro-socialist crowd here in the United States dismisses those examples as irrelevant, usually employing some lame argument that those countries didn’t implement socialism the right way. American socialists would say they fully intend to avoid making those same mistakes.

Before proceeding, let’s define socialism. Dictionaries tell us that “socialism” is a system in which the government owns the means of production. Rare indeed is the Washington officeholder calling for the outright nationalization of all major businesses. Much more common is the support for the Nazi-fascist version of socialism. The fascist variant technically allows businesses to remain under private ownership, but the government tells them what to produce.

That is more or less what American socialists are aiming for today. Thus, they seek to weaken private property rights, put the federal government in charge of mandating and directing what gets produced, and orchestrate a more equal distribution of wealth. In short, they don’t call for literal socialism but rather for an economically ubiquitous and dominant government infused with the spirit of socialism.

How well would American “socialism” work? Fortunately, just as Scrooge is given a glimpse of a grim future and is able to change course and spare himself ruin, so too the people of the United States have been granted a glimpse of the future—the Ghost of Socialism Yet to Come. In the past two years or so, we have had multiple “sneak previews” of what life under socialism would be like with Big Government controlling huge swaths of our economy and implementing “expert” central economic planning. Let us review a few of these peeks.

To a large extent, Americans did what governments told them to do during the COVID-19 pandemic. Many state governments imposed lockdowns. They thought they knew best. Unfortunately, though, as multiple studies have shown, governments didn’t know any better than the rest of us about how we should have responded, and the results were grim.

A Rand Corporation study showed that “lockdowns increased all-cause mortality to a statistically significant extent,” according to the Committee to Unleash Prosperity (pdf). A paper in The Lancet—the highly respected British medical journal—found that government lockdowns “were not associated with statistically significant reductions in the number of critical cases or overall mortality.” A study published in Frontiers in Public Health arrived at a similar conclusion. Researchers at Tel Aviv University stated, “We would have expected to see fewer COVID-19 fatalities in countries with a tighter lockdown, but the data reveal that this is not the case.” Oxford University researchers found “little correlation between the severity of a nation’s restrictions and whether it managed to curb excess fatalities,” Bloomberg reported.

Lockdowns and the social isolation that accompanies them caused an increase in depression-related drug overdoses and suicides, and a notable increase in the incidence and severity of domestic violence. Also, when COVID-19 first emerged as a threat, many hospitals were ordered to temporarily suspend non-COVID-related examinations, tests, treatments, and so on. Unfortunately, those directives stirred up enough fear that many people suffering from cancer, dementia, heart disease, and so on stayed away from medical practitioners, costing some of them their lives.

It can be said of those politicians who imposed lockdowns that they really can’t be blamed because COVID-19 was a new virus and there was no pre-existing set of instructions for how to cope with it. However, it’s vividly apparent that expecting the government and the “experts” they rely upon to know how to proceed is at best highly risky.

Socialism’s principal claim is a supposed ability to wisely direct a society’s economy, so let’s look at the economic plans that Presidents Donald Trump and Joe Biden hatched to “help” the economy during the pandemic.

There were at least eight federal programs passed to try to help Americans deal with the economic upheaval that the pandemic caused. The most prominent were the three acts that included direct payments to American taxpayers—the March 2020 CARES Act ($1,200 stimulus checks), the December 2020 Consolidated Appropriations Act ($600 stimulus checks), and the American Rescue Plan Act of 2021 ($1,400 stimulus checks). With Trump having signed the first two into law and Biden the third, we have truly bipartisan participation in these efforts at governmental economic management.

Here are some of the results (besides fraud and waste, which are inevitable in such expensive government programs):

Job loss. A Harvard study found that lockdowns had a disproportionately negative impact on poorer Americans. During the first year of the lockdown, employment declined by 23.6 percent for those earning less than $27,000 per year and by 4.5 percent among those earning between $27,000 and $60,000, while actually rising slightly for those earning more than $60,000. Lockdown restrictions, according to the Massachusetts Institute of Technology, correlated with higher unemployment. At a time of acute labor shortages and supply chain disruptions, it wasn’t helpful that “at least 1.8 million Americans” decided not to go back to work, on account of federal handouts.

Small-business closures. In a paper (pdf) published by the Stanford Institute for Economic Policy Research, Robert Fairlie calculated that the policy response to the pandemic caused the number of active business owners to fall by over 22 percent in the first two months of the pandemic. Many of those businesses have remained closed. This decline has disproportionately affected minority-owned businesses. Another survey found that approximately 100,000 small businesses closed for good during the first six months of lockdowns.

Economic impacts on children. In addition to falling behind in their learning and suffering emotional scars from masking, social distancing, and remote learning, McKinsey research estimates that the policy response to the pandemic will cost “the average K–12 student in the United States … $61,000 to $82,000 in lifetime earnings (in constant 2020 dollars), or the equivalent of a year of full-time work, solely as a result of COVID-19–related learning losses.” As with small-business closures, the losses fall disproportionately on minorities.

A common feature of government-run economies is shortages. The relatively small number of government planners just don’t know how to coordinate production, while millions of business owners are making use of the economically rational prices that only a private property order can produce.

Today, the United States is dealing with a serious shortage of baby formula due entirely to bumbling bureaucratic management at the FDA and the federally funded Women, Infants and Children program that doesn’t allow participating mothers “to switch to a different brand if the state-contracted provider’s brand is sold out,” The Wall Street Journal reported. In response to the shortage, the government has used military aircraft to fly in additional supplies from Europe, likely making those servings of baby formula the most expensive ones in history. Well, governments are not known for their efficiency.

And look at energy. Soaring gasoline prices are a painful result of the Biden administration having zealously pursued an anti-fossil fuel agenda that has reduced supply. Extensive government intervention in the electricity business in California has resulted in periodic brownouts and blackouts becoming almost routine. That is astounding. In the 1950s, blackouts were virtually unknown in the United States. They were confined to Third World countries. Well, give us more government planning such as that we’re seeing in California, and our cities will have an erratic supply of electricity similar to what plagues cities in poor, developing countries.

I won’t insult you by belaboring this point. The worst inflation in 40 years is all around us, pinching our pocketbooks every time we fill up our vehicles or go to the grocery store.

Scrooge learns from his visit from the Ghost of Christmas Yet to Come and mends his ways in time to avert doom. Will the American people take advantage of recent sneak previews of how even well-intentioned socialistic government planning makes things worse? Will we change our polity’s direction in time to save ourselves and our children from ruin? We shall see.