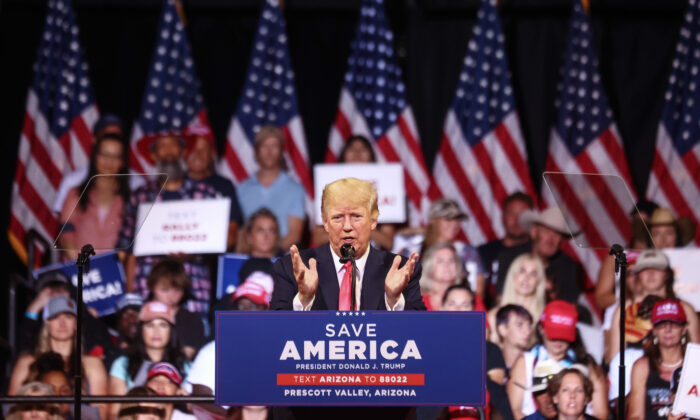 Conrad Black: How American Politics Will Be Depolarized

It’s time to consider how the profound divide in American public life is going to be narrowed back to the civil resolution of differences.

American public discourse appeared to be proceeding quite normally, as demonstrated by Presidents Bill Clinton, George W. Bush, and Barack Obama as only the second trio of consecutive two-term presidents in American history; the previous one—Jefferson, Madison, and Monroe—was 200 years ago, and Monroe’s reelection was uncontested.

The apparent serenity of American public life was interrupted by Donald Trump, who detected, as a populist (notwithstanding being a billionaire), that there was an ever-increasing number of disgruntled working- and lower-middle-class people whose real disposable income wasn’t rising, who suffered from globalist trade and immigration practices, and were disparaged by Hillary Clinton’s reference to half of Trump’s followers as “a basket of deplorables” and candidate Obama’s snide reference to people overly preoccupied with firearms and religion (this from someone who spent 20 years in the church-pew of the fire-breathing racist Rev. Jeremiah Wright).

Trump changed parties seven times in 13 years waiting for his moment and astounded and discountenanced the world by winning the Republican nomination and the presidency in 2016. The Bush, McCain, and Romney post-Reagan Republican establishment (except for Robert Dole), rejected Trump from an almost never-explicable melange of motives: envy, snobbery, sour grapes, and concerns both authentic and confected that he was a racist, sexist, and extremist, as well as being corrupt, authoritarian, boorish, and unable to contain his juvenile temper and his tendency to crude invective.

Since it was the business of the Democrats to defeat Republicans anyway and they tended to be disdainful of them, their opposition to Trump has been slightly less frenzied than that of the anti-Trump Republicans, the Never Trumpers.

After Franklin D. Roosevelt led a broad coalition of Americans to victory against and over the Great Depression and he and his designated successor, Harry Truman, led the country through World War II and into postwar prosperity in five consecutive terms, they were the natural party of government, and the Republicans could only win by recourse to the time-honored method of recruiting a military hero to lead them in an almost nonpartisan way (Dwight Eisenhower), and when Richard Nixon capitalized on the Vietnam War, and when Ronald Reagan exploited the political vulnerabilities of the benevolent but indecisive and somewhat ineffectual Jimmy Carter.

The Bushes were almost indistinguishable from the Democrats and painlessly fulfilled the need for the maintenance of the appearance of a two-party system; bipartisanship had become a uni-party state. One or other member of the Bush and Clinton families was president, vice president, or secretary of state for 32 consecutive years (1981–2013).

Obama not only broke the color barrier, he also moved the Democrats distinctly to the left. Trump didn’t respond by moving the Republicans further to the traditional right; he applied the primordial Republican reverence for capitalism to incentivize investment in disadvantaged areas and practically eliminated unemployment and poached dangerously large numbers of traditionally Democratic voters.

The resentment of the pre-Trump Republicans, the Democrats’ fear of the saleability of Trump’s populism, and Trump’s acidulous responses have caused the present ugly nature of the current political debate. The establishments of both parties have created the almost equivalently belligerent righteousness of the Trump-haters and the Trump supporters.

The question of the accuracy of the election result has arisen from the constitutionally questionable changes to voting and vote-counting rules, especially in the swing states of Arizona, Georgia, Michigan, Nevada, Pennsylvania, and Wisconsin, ostensibly to facilitate voting during the pandemic and address the many millions of ballots that couldn’t be verified as having been cast by an identifiable registered voter, as it was unclear who had custody of the ballots prior to their deposit, at voting places or improvised drop-boxes.

The existence of these doubts caused what seems to be the ultimate guardrail on one side of American politics to have been tested. This was in the Supreme Court’s decision and the decisions at various judicial levels not to judge on their merits any of the 19 cases that challenged the constitutionality of the voting and vote counting rules changes, most conspicuously that of the attorney general of Texas supported by 18 other states against the swing states for failing in the constitutional obligation to conduct fair presidential elections, which was automatically initiated at the Supreme Court as it was interstate litigation.

The judiciary showed its institutional conservatism when it uniformly declined to entertain litigation that could overturn the result of the presidential election. This too is an American tradition going back to Democratic presidential candidate Samuel Tilden’s acceptance in 1876 of the improbable victory of his opponent, Rutherford B. Hayes, in exchange for several post-electoral actions that accelerated the reintegration of the South into the Union.

Richard Nixon had similar thoughts, though he’s rarely credited with them, when he declined formally to challenge the questionable results of the 1960 presidential election, as something that would be irreparably damaging to the country. (Trump should never have approved Rudolph Giuliani’s ill-considered trick-or-treat election challenges.)

Trump hasn’t been so scrupulous, but he also feels he has been much more brazenly robbed. The Democrats and Never Trumpers would be complacently unconcerned if the administration they promoted had been competent. Instead, the Obaman drift to the left, without that president’s suavity and generally good judgment of the public mood, has become a lurch to the far left, for which there’s no mandate and which has been a total failure.

As this shambles becomes clearer, it also becomes clearer that the only way to stop the return of the dread Trump is to render him unelectable. This is the real motivation of the ludicrous and disgraceful kangaroo court of the congressional January 6 committee and of the ant-like movements of the Atlanta district attorney (Fani Willis) to find criminal wrongdoing by Trump in his challenge to the Georgia election results in 2020.

This should bring us to the other guardrail of American public life: Trump broke no laws in the last election and any attempt to prosecute him on such charges will be seen, particularly when they are thrown out despite the American prosecutors’ obscene 98 percent success rate, as a savage and corrupt assault on democracy. If God’s blessing is still on America, the prosecutors will line up with the judges: They declined to consider overturning an election, and the prosecutors would make a terrible mistake if they try artificially to remove a presidential candidate.

The horrifyingly obnoxious caricature of Trump that has been created is false, but like most caricatures, has an element of truth. The current uncivilized state of American politics will be resolved by electing Trump or a candidate endorsed by him to carry out the Trump program. It worked and was ratified by a Republican gain of 20 congressmen in 2020, and it will be ratified again in November.

Neither the pathological opposition to one candidate nor the unsustainable incompetence of the current administration can continue much longer.