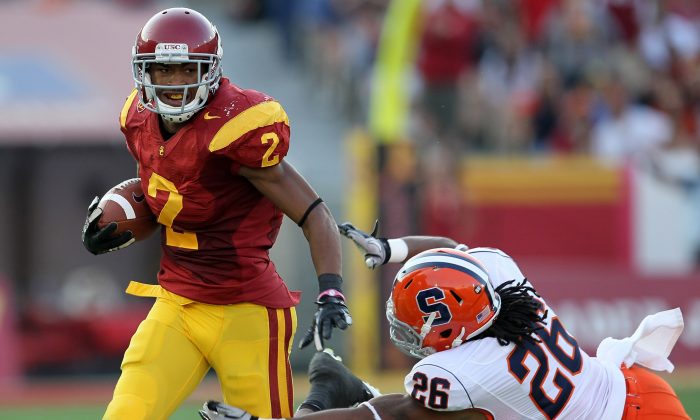 Wide receiver Robert Woods of the USC Trojans was rated as the sixth-best overall player in the class of 2010. (Stephen Dunn/Getty Images)
College Sports

How Accurate are Rivals.com Rankings?

It’s common knowledge that the NBA, NFL, and MLB drafts are all crapshoots—with baseball being the biggest of them all. Until the player actually shows up in uniform and starts practicing with their new team, it’s very hard to tell if they’ll succeed or not.

Colleges go through a similar process in recruiting, although they’re not limited by a draft order. It’s a free-for-all, which is partly why there’s so much disparity.

Universities like Alabama, Texas, USC, Ohio State, and a select few others load up on four and five-star recruits on an annual basis while teams like my beloved Kansas is stuck with the remaining two and three-star prospects. (Sometimes we do get the occasional four-star junior college transfer, but inevitably they either can’t crack the starting line-up, transfer, or are declared academically ineligible—every time.)

The results are predictable, as it’s difficult to be anything more than a “flash-in-the-pan” when you’re not getting the “cream of the crop” out of high school. (FYI, KU’s last “flash” was seven years ago and counting. I blame Charlie Weis.)

And even though the aforementioned super powers are annually at or near the top of the college rankings, does it mean that all their big recruits turn into NFL stars?

To get the answer I took a look back at college football’s class of 2010. Since it’s been five years since they first enrolled, everyone has had time to complete their eligibility.

Rivals.com, one of the most respected and well-known recruiting sites, gave out 26 five-star ratings that season. Here’s how they panned out:

Of these 26 prospects, 13 were already drafted into the NFL, four went undrafted (although three of them have caught on as free agents), six will be eligible for this April’s draft, one sat out two years because of his medical condition (cancer) and is just a sophomore, and final two others dropped out of football altogether.

Of the 13 drafted, four went in the first round, two were selected in the second, there was one third-rounder, two fourth-rounders, a fifth-rounder, a pair of sixth-rounders, and Sentreal Henderson, the second-ranked player overall, was the lone seventh-round pick (by the Buffalo Bills) last year.

The results are a little surprising. Although six more are eligible to be drafted this spring, only UCLA defensive end Awamagbe Odighizuwa is listed by ESPN draft guru Mel Kiper Jr. as being among the top ten players at his position, though he doesn’t have him listed as a probable first-round pick.

Looking at it from the other direction, of last year’s 32 first-round draft picks, just four were five-star prospects, three made it despite being given two-star rankings, 13 were four-star recruits, and 12 were three-star players.

Nearly half (15) of last year’s 32 first-round selections were either two- or three-star prospects, with former two-star linebacker Khalil Mack getting selected fifth overall by Oakland.

Oh, and none went to Kansas.