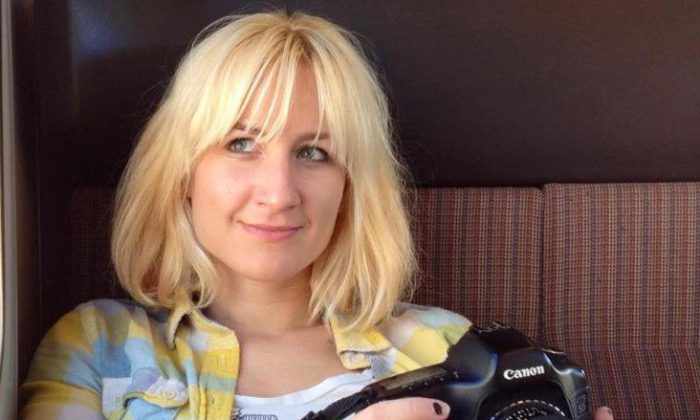 From lawyer to art blogger, 30-year-old Katarina Hybenova never imagined such a change of course when she moved to New York from Czech Republic.

In Bushwick, Brooklyn, Hybenova found the meaning of art—to inspire people to become better. Sipping her coffee in a homely Bushwick cafe, she explained her view of art with ease and enthusiasm.

“It’s a way of reflection, [of] stopping time and thinking. You need to ask yourself, ‘Why am I doing this? What meaning does it have? Where am I heading? What does [the] past mean for me?’”

This thread of questions led Hybenova away from a career in law and toward the founding of a hyperlocal publication, Bushwick Daily, that now has more than 50 contributors and four editors. It started as a hobby blog; Hybenova wanted to capture the unique art scene in Brooklyn.

She has two masters degrees in law and she completed her postgraduate degree in New York.

Though discouraged at the time, in retrospect, Hybenova realizes her lack of success in finding the right job in her field wasn’t just because of the economic crisis.

“I didn’t really want to work as a lawyer—I was utterly scared of it,” she said. “I came here hoping it would radically improve my life and that it would lead to something new and exciting.”

She explained the energy of New York City: “There is definitely something about this place, which I really love—some kind of energy. Everybody comes here with a wish to change their life and move forward.”

For Hybenova, moving to New York was an ultimate life-changer, or as she would put it, a push toward becoming the person she really is: “You can’t fool anybody here, it’s impossible. I was trying to consider myself a lawyer, but I wasn’t able to put my whole [self] … into it. You either give everything or nothing—it’s the only way here.”

She was able to give herself wholeheartedly to working on her blog.

Raised in Slovakia, she studied in Prague, Czech Republic, then worked for an American law firm in Prague before moving to New York. Sitting in her office in Prague, she would think, “Gosh, this is absolutely nothing I’d imagined.”

“I also realized, that it’s something completely different from what I really want to do,” Hybenova said. Postgraduate studies in New York was a way out.

She took a natural interest in the art scene, and soon realized the New York she had pictured while back in Europe is not in Manhattan, it’s in Brooklyn.

The creative energy in Bushwick is fueling developments in art Hybenova feels are historic:

“I established the blog aiming to document everything that is happening here. So in twenty years, when somebody talks about Bushwick’s art scene, I will have the photos of those artists and their stories.”

At first the blog was just something nice to brighten her day as she was on the job hunt. Her blog became popular quickly, and in addition to enthusiastically connecting with local artists, she started to study web trends and advertising, and figured out how to wedge herself into a saturated blogging scene.

“Although some people say that whole journalism is dying, I believe the opposite is true,” Hybenova said with ardor. “People crave information, the demand is huge. But we need to think of a completely new model.”

Though the Internet is full of blogs of all kinds, Hybenova said innovation is the key. “People often think that if something [hasn’t been] done some special way yet, it means you can’t do it and it is impossible. But on the Internet, everything is new: what you come up with can become the next big thing.”

She relates in this manner to the Bushwick artists she documents, all striving to bring their unique visions to the fore.

“For artists, the connection between their work and inner self is crucial, as it is [an] expression of their self. It is very important to be in contact with your true self. You can’t do art without it,” Hybenova said.

She added: “People are used to thinking that something is hard, but actually that is the reason why is it so.”

Profitably running her own business, Hybenova has learned success comes when you are working on something you’re truly passionate about. Speaking about her move to New York, she said, “Life here brought me the opportunity to be myself.”