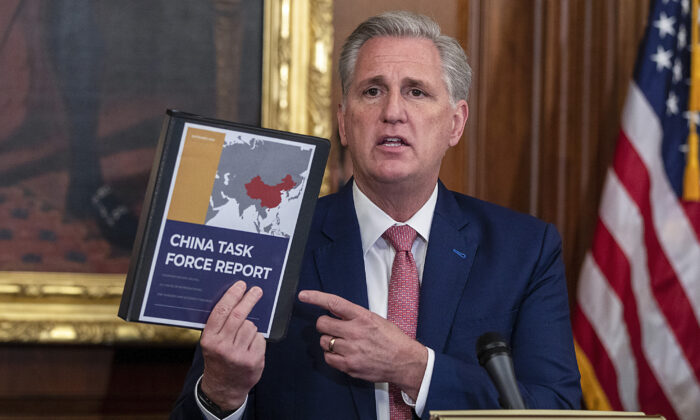 The establishment of a new China Committee by the House in the U.S. Congress is being widely seen as the first victory of the new Republican
Speaker of the House Kevin McCarthy. But most people have failed to realize that this committee should have been established a long time ago.

A total of 365 members of the 118th U.S. House of Representatives voted to support the formation of the new Select Committee with the support of all Republicans and 146 Democrats. Capitol Hill has not seen such overwhelming bipartisan support for almost anything for years.

Why is it necessary to establish a new committee specifically dealing with issues related to the CCP?

The answer to this question is clear: Americans need to take immediate action if they don’t want to see their future generations become slaves to the CCP.

China’s economy has grown tenfold since it joined the WTO in 2001. A simple comparison of the following five aspects between the CCP today and any regimes of the past clearly shows that the CCP now represents the biggest threat to peace and humanity in human history:

Looking back over the past century, the United States has had two very different strategies for dealing with communist regimes. One succeeded, and the other failed.

The successful one was the Cold War strategy, which effectively drove the Soviet Union into its economic collapse, which later resulted in regime change.

The failed one was the China policy that was based on the wishful thinking that the CCP would eventually make political reform in China after the population became richer, with a larger middle-class population. The West allowed China to join the WTO in 2001. By 2021, total direct investment from the United States alone in China was up close to $120 billion. The direct investment from the entire Western World totals many hundreds of billions of dollars.

While the United States continuously lost jobs and industries to China in the past two decades, unfortunately no one even bothered to ask a simple question: During the Cold War between the Soviet Union and the free world, if the West had invested hundreds of billions of dollars in its enemy, would the Soviet Union have ever collapsed? Would it have even been possible for the Soviet Union’s political system to come up with a political reform leader like Mikhail Gorbachev?

What happened after the CCP regime eventually became richer and more powerful?

During U.S.-China Alaska summit in March 2021, China’s top diplomat Yang Jiechi looked straight into the eyes of U.S. Secretary of State Antony Blinken, and said: “The United States does not have the qualification to say that it wants to speak to China from a position of strength.”

The Chinese regime started building artificial islands in the South China Sea in 2013. By 2022, three out of the seven man-made islands have been occupied by the Chinese military. In June 2021, Beijing’s authority officially claimed that China has full sovereignty over the Taiwan Strait.

On the Europe-Asia continent, an anti-US alliance is quickly forming around the regimes ruling China, Russia, North Korea, Iran, and Afghanistan. As China’s GDP is more than ten times Russia’s, it is clear that Beijing has taken the leading role in this alliance.

The Chinese regime has become the biggest threat to the peace and stability of the Indo-Pacific region.

U.S. legislators used to only have to deal with China on issues related to human rights, trade, and intellectual property rights. But now, as the threat from the CCP is quickly escalating, the congressional members will have to consider a much wider range of complicated issues.

In the decades to come, the newly established U.S. House China Committee will need to be a very effective tool when it comes to dealing with the Chinese communist regime.