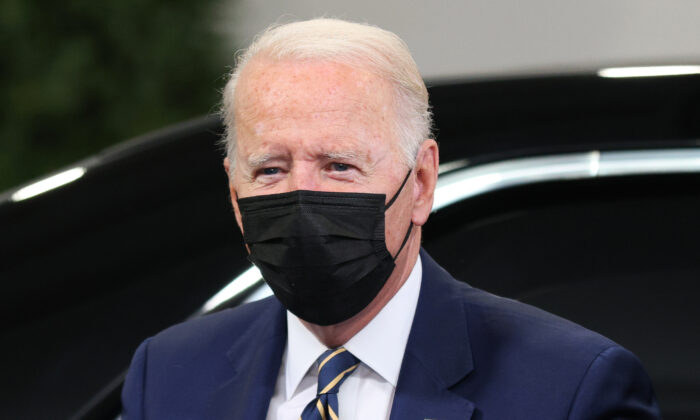 President Joe Biden is seen upon arrival at a climate summit in the United Kingdom on Nov. 1, 2021. (Adrian Dennis/Pool/Getty Images)
Republicans

A group of Republican lawmakers are planning to introduce a resolution to strike down President Joe Biden’s vaccine mandate after the federal Occupational Safety and Health Administration (OSHA) released its emergency temporary standard requiring businesses with 100 or more workers to have their workers get vaccinated or submit to regular testing for COVID-19.

In a statement issued on Thursday, House Education and Labor Committee Republican Leader Virginia Foxx (R-N.C.) confirmed that GOP lawmakers on her committee will “introduce immediately a Congressional Review Act resolution to nullify OSHA’s ’emergency’ rule when it is received by Congress.”

Biden’s rule (pdf) will go into effect on Jan. 4 in a bid to raise vaccination rates and get more people back to work. However, a significant number of trade groups have issued warnings about the mandate, saying that it would exacerbate supply chain bottlenecks and staffing shortages nationwide—leading some association presidents to ask the White House to delay the rule until after the holiday season.

Employers are not required to provide or pay for tests, and the rule offers medical and religious exemptions. Unvaccinated people have to wear masks while on the job, the rule stipulates.

Those who do not comply with the mandate will result in an approximately $14,000 fine per violation with a scale that increases with several violations, according to the rule. It’s not clear what penalty will be handed down for workers who don’t wear face masks and who are not vaccinated.

A senior Biden administration official said Thursday that the White House believes the mandate will spur vaccinations across the United States.

After Biden announced the mandate on Sept. 9, a number of Republican governors and attorneys general promised to file lawsuits against the rule. So far, more than a dozen GOP-led states have sued the administration over a related but separate mandate that federal contractors and workers get the vaccine.

And on Wednesday, a group of Republican senators sent a letter to Senate Majority Leader Chuck Schumer (D-N.Y.) signaling their intention to block funding for the vaccine mandate.

“We will oppose all efforts to implement and enforce it with every tool at our disposal, including our votes on spending measures considered by the Senate,” the letter led by Sen. Roger Marshall (R-Kan.) read. “To be sure, we agree that countless Americans have benefitted from the protection offered by the COVID-19 vaccines. Nevertheless, the decision whether to be vaccinated against COVID-19 is a highly personal one that should never be forced upon individuals by the federal government.”