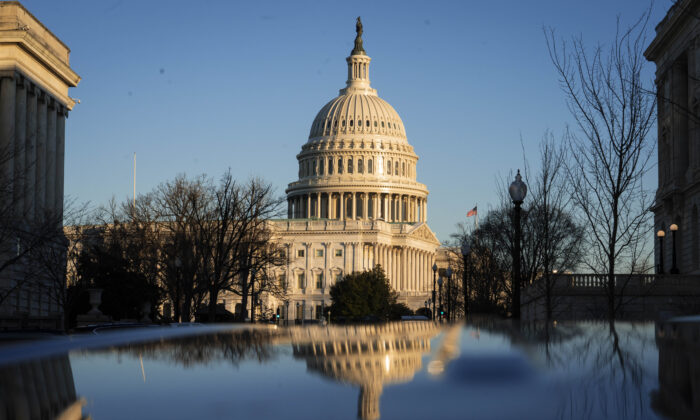 The exterior of the U.S. Capitol building in a file photo. (Sarah Silbiger/Getty Images)
By Joseph Lord

The first measure passed by the House would ban abortion on babies born alive and require that these babies be given medical care and treatment.

This bill was the first of the two to be considered by lawmakers. When brought to the floor, Democrats attempted and failed to have the bill sent back to committee. That motion failed by a vote of 212–219.

Ultimately, the bill passed the House by a vote of 220–210. One Democrat voted in favor of the measure, Rep. Henry Cuellar (D-Texas), while all other Democrats opposed the measure.

Republicans lauded the bill as a “common sense” measure that would ensure that infants born alive after a failed abortion attempt would receive medical attention.

Democrats tied their opposition to the measure to claims that it is part of a larger GOP plot to ban abortion nationwide.

Despite broad GOP support, the bill banning abortions on infants born alive did face some criticisms from within the majority party.

Many Republicans have expressed concerns that Republicans’ position on abortion was in part responsible for their underperformance in the 2022 midterm elections.

This was the case made by Rep. Nancy Mace (R-S.C.), who argued that the bill was “tone-deaf.”

“It’s tone-deaf at this point. It’s never going to pass the Senate. It’s never going to get to the president’s desk to be signed into law,” Mace told reporters on Jan. 10. “We’re only paying lip service to the pro-life movement. If you want to make a difference and reduce the number of abortions with a Democrat-controlled Senate, the No. 1 issue we should be working on is access to birth control.

“We have been tone-deaf on this issue since the time that Roe was overturned. We buried our heads in the sand,” she added. “We didn’t have any policy alternatives. We were not compassionate to both sides of the aisle on this argument.”

Mace, who has been critical of President Donald Trump, beat out Trump-backed challenger Katie Arrington in her party’s primary in a district that voted for Biden in 2020.

The other measure condemned a spurt of growing attacks against crisis pregnancy centers (CPCs).

In a speedy vote after the “born alive” bill, the House passed the measure by a vote of 222–209, including Cuellar and two other Democrats who approved the measure.

Crisis pregnancy centers are nonprofits founded for the purpose of providing counseling, support, and resources to persuade women against having an abortion. Often, services provided by these organizations include financial assistance, child-rearing resources, and adoption referrals, among others.

Specifically, crisis pregnancy centers often furnish new and expecting mothers with essentials like baby formula, diapers, and clothing in an effort to give women facing financial hardship an alternative to abortion.

Following an unprecedented leak showing that the Supreme Court was poised to overturn Roe v. Wade—which it later did in the majority opinion of Dobbs v. Jackson Women’s Health Organization—pro-abortion activists took to the streets. In many cases, demonstrations turned violent and crisis pregnancy centers found themselves facing violent attacks across the nation from Portland to Washington, D.C.

The resolution put forward by Republicans would condemn these attacks, which Republicans say the Department of Justice (DOJ) has been less than active in prosecuting.

Rep. Harriett Hageman (R-Wyo.), one of the newest members of the House of Representatives, made a speech supporting the measure on the House floor.

“Since the day that the Dobbs decision was illegally leaked, attacks against pregnancy centers, centers of worship, and other pro-life institutions have skyrocketed,” Hageman said.

This is true, as a series of incidents across the country demonstrate.

On June 10 Luke Cirillo, the CEO of First Image, which runs a series of crisis pregnancy centers in Portland, Oregon, received a call from police that pro-abortion activists “threw an incendiary through one of the windows [of one of the centers] which lit a significant fire in the back room.”

This was not the only attack against First Image in the Portland area: on May 5, over a month before, another First Image facility had been vandalized and had the graffiti “[expletive] CPCs” written on it.

On the other side of the nation, a crisis pregnancy center run by CompassCare in Buffalo, New York was firebombed by pro-abortion agitators. Photographs posted on Facebook showed the effects of this attack, with windows blown out and glass lining the sidewalk outside of the facility.

“Jane was here,” a reference to “Jane Roe,” was also written on the wall at the side of the facility.

The FBI has said that they are investigating the attacks, but crisis pregnancy centers have continued to face the fear of further violent attacks by pro-abortion radicals.

On July 7, two crisis pregnancy centers in Massachusetts—the Clearway Center and the nearby Problem Pregnancy clinic—were also vandalized. “Jane’s Revenge,” was painted on the doorways to both clinics.

Even in the nation’s capital, crisis pregnancy centers are not safe from the spurt of violence.

Photos posted to Twitter show the door of the Capitol Hill Crisis Pregnancy Center covered in red paint and the words “Jane’s Revenge” written in graffiti on a nearby wall.

“Cases of harassment, fire bombings, and physical assaults have been reported all across the country,” Hageman said. “These violent acts count as intimidation of those individuals who need the services provided by these pro-life, faith-based organizations.”

Hageman contended that the resolution is necessary because President Joe Biden and the DOJ have failed to adequately condemn and prosecute these attacks.

The DOJ, Hageman said, “has refused to take any action to identify and prosecute those who have committed these crimes.”

In an interview with The Epoch Times’ sister media NTD, Rep. Beth Van Duyne (R-Texas) explained the impulse behind the resolution.

“I think what we’re trying to do is set the tables right again, let it be known where we do stand on abortion, where we stand on life,” Van Duyne said. “And I think it’s the timeliness of finally getting into the majority to be able to have something like this pass after seeing some of the monstrous bills that passed last Congress, I think it’s important for the American people that they recognize that we actually do appreciate and do on focus on life.”

Asked about whether the measure is, as Democrat opponents have claimed, an “extreme” measure, Van Duyne replied, “I’d say that the last Congress, we saw the most extreme nature of Democrats, when you agree to the abortion of a baby up until the moment of birth, that’s extreme.”

Democrats’ Women’s Health Protection Act, passed by the House and shot down by the Senate during the last Congress by a bipartisan vote, would have allowed abortion until the moment of birth, a standard that would have put the U.S. in league with China and North Korea, some of the only states that allow such late-term abortion.

Since 1993, Democrats noted, 11 abortionists have been killed by pro-life individuals. However, in recent months CPCs have faced more threats than abortion clinics by a wide margin.

Notably, Democrats have been opposed to CPCs for some time.

In July 2022, several Democrats called for the shutdown of CPCs nationwide, claiming they are “deceptive.”

This point was reiterated on the House floor, as several Democrats repeated charges that these centers are deceptive. This critique comes from scattered instances involving CPCs misleadingly marketing themselves as abortion providers, those these situations are relatively uncommon.

Other Democrats saw in the bill a threat of a broader goal to outlaw abortion entirely.

“They will not stop until they reach their ultimate goal: a nationwide ban on abortion,” said Rep. Jerry Nadler (D-N.Y.), who led debate on the Democrat side.

Ultimately, every single Democrat voted against the legislation.

In an interview with The Epoch Times, Kristen Day, a representative of the group Democrats for Life, a Democrat group opposed to abortions, encouraged Democrats to reconsider, suggesting that true Democrats should oppose unrestricted abortion.

“These attacks on the pregnancy centers cannot continue,” Day said. “Most of the people who work in these centers are women. They’re not there to make a lot of money. They’re there to help other women. And so it’s really counterintuitive to what the Democratic Party is supposed to be standing for, which is to help the vulnerable. And by allowing these attacks and supporting these attacks, they’re doing the exact opposite—they’re attacking the most vulnerable in our society.

“They’re on the wrong side on this, and I think history will show that,” Day added.

Day said it was “hypocritical” for Democrats to oppose the bill, and suggested that much of the opposition comes from handouts by the lucrative abortion lobby.

“It’s completely hypocritical to not support this bill,” Day said. “Every Democrat in the House should support it.

“To say that they’re not going to support it because something isn’t included is just ridiculous. It just shows how lockstep [House Democrats] are with the abortion lobby and trying and helping the abortion lobby make money [and] raise money for them. It’s all about money, and they’re just showing that they don’t care about women. They really don’t care about women at all, because they want them to have only one choice. So the abortionists can make money so they can turn around and give that money to [Democrat] campaigns so they can win elections. And that’s all it is.”

With their passage by the House, the bills will now head to the Senate, where they will likely be shot down.

In the upper chamber, almost all legislation must overcome a 60-vote threshold to end debate and send the measure to the floor for a simple majority vote. Because Democrats hold the upper chamber comfortably, it is likely that the measures will die by filibuster.

Even if the bills did pass the Senate, it is unlikely that Biden would sign off on the measures.