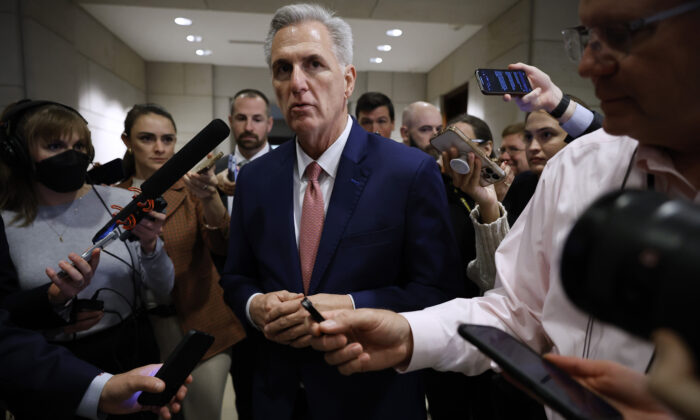 The vote happened during a closed-door meeting on Capitol Hill in Washington as Republicans near gaining control of the House of Representatives, securing 217 of the 218 seats they need with more than a dozen races still uncalled.

During the closed-door vote, 188 Republicans voted to nominate McCarthy as speaker while 31 were opposed, The Epoch Times confirmed.

Moving into the vote, only a few positions were contested—most notably, the position of speaker of the House.

Though he is favored to become speaker, McCarthy was challenged moving into the vote by Rep. Andy Biggs (R-Ariz.), who has been critical of McCarthy.

On the evening of Nov. 14, Biggs confirmed that he would be opposing McCarthy.

“We have a new paradigm here, and I think the country wants a different direction from the House of Representatives,” Biggs told Newsmax. “And it’s a new world, and, yes, I’m going to be nominated tomorrow to the position of speaker of the House.”

Biggs’s declaration did not come to fruition, but the nomination is far from meaning that McCarthy is the clear pick.

The vote for speaker of the House, unlike other leadership positions in the lower chamber, must be voted for by a full canvas of the House of Representatives. Traditionally, the minority party votes unilaterally against the majority’s pick for the top House spot.

This means that to fulfill his longtime goal of gaining the speaker’s gavel, McCarthy will need to convince all but a handful of Republicans to give him their backing.

If the Nov. 15 vote is any indication, McCarthy is still far short of the 218 votes he’ll need.

Some Republicans have attributed their opposition to McCarthy to the lackluster results he delivered for the party in the midterms.

“The House ‘leadership’ play,” McCarthy critic Rep. Chip Roy (R-Texas) said, “was to offer an eleventh-hour, tepid, and weak ‘Commitment to America,’ which few people knew about, much less cared about, and which said both everything and nothing.”

A Capitol Hill staffer who asked to remain anonymous echoed this sentiment.

The aide told The Epoch Times that where Republicans expected a “red wave,” McCarthy and other leaders delivered a “red trickle.”

“McCarthy should be sweating,” the aide added.

Other Republicans, including Rep. Matt Gaetz (R-Fla.) have also been critical of McCarthy, questioning his conservative credentials.

“And I am certain that there is a critical mass of people who hold my precise view, and so the sooner we can sort of dispense with the notion that Kevin is gonna be speaker, then we can get to the important work of actually looking at who are the people that Brian Fitzpatrick and Matt Gaetz can agree on.”

On the other hand, McCarthy does have some prominent supporters, as he noted before heading in for the vote.

Foremost among these are Reps. Marjorie Taylor Green (R-Ga.) and Jim Jordan (R-Ohio), who some Republicans prefer for the speakership.

“We’re going to have the ability to change America,” McCarthy said, upbeat as he entered the private meeting.

He noted backing from right-flank Republicans Greene and Jordan as part of his “vast support.”

“It’s very, very risky right now to produce a leadership challenge, especially for speaker of the House, when they are going to open the door and allow Liz Cheney, possibly, to become speaker,” Greene contended.

Though it’s unlikely, the possibility that Greene is alluding to could come to fruition. Specifically, this is because of the way that the race for speaker of the House works.

When parties convene to choose positions like whip, majority or minority leader, and conference chair, only members of the party caucus vote. But for the election of the speaker, the whole House votes.

Theoretically, Democrats could nominate Cheney, who otherwise will be leaving Washington in January after being defeated in her primary, as speaker. If the minority party united behind Cheney, only a handful of Republican defections could grant Cheney the gavel.

Though there has never been a speaker of the House who was not a sitting, elected member of Congress, the Constitution does not mandate the speaker be such.

Because of this some Trump allies, including Gaetz most prominently, have pushed for naming Trump speaker.

The same could happen with Cheney if she were nominated by Democrats.

On the other hand, McCarthy currently doesn’t have the votes to win the post.

Though Jordan’s name has been tossed around as a contender, the Ohio Republican is backing McCarthy and seems uninterested in the top post.

Because Republicans will be working with a razor-thin caucus, and because many in the party are critical of McCarthy, Republicans have no heir apparent for the spot at the moment.

The House nevertheless must elect a speaker. If McCarthy can’t corral his caucus, he could find himself forced to withdraw his name and make room for another candidate.

Though he still has time to sway skeptics, the Nov. 15 vote is an indication that the party is far from united behind the possibility of a Speaker McCarthy.

While the race for speaker remains contested, other races decided on Tuesday were uncontested.

Rep. Steve Scalise (R-La.), who currently serves as the House minority whip, was selected by his party to serve as the House majority leader in the 118th Congress.

“What bills come up in the House of Representatives, it’s something I’ve already been talking to my colleagues about. I’ve got a vision for what I’d like to see us address. We need to get back to confronting the pocketbook issues,” said Scalise after his unanimous selection for the top Republican spot after speaker.

Rep. Elise Stefanik (R-N.Y.), who chairs the House GOP conference, was selected to reprise her role.

In a statement after the vote, Stefanik vowed: “In the new Republican majority, we will stand up for an economy that’s strong, a nation that’s safe, a future that’s built on freedom, and a government that’s accountable to the American people.”

The tightest race was a three-way battle for House majority whip between Reps. Tom Emmer (R-Minn.), Jim Banks (R-Ind.), and Drew Ferguson (R-Ga.). Emmer, whose name had been tossed around for speaker, won the number three spot.

Because Democrats have not yet conceded the House of Representatives as lost, their leadership elections have not been held yet.

It remains unclear whether current Speaker of the House Nancy Pelosi (D-Calif.) will again reprise her role as the Democrats’ leader in the House, or if she’ll accede to pressure from younger members to let a new generation take over.

Caden Pearson and the Associated Press contributed to this report.