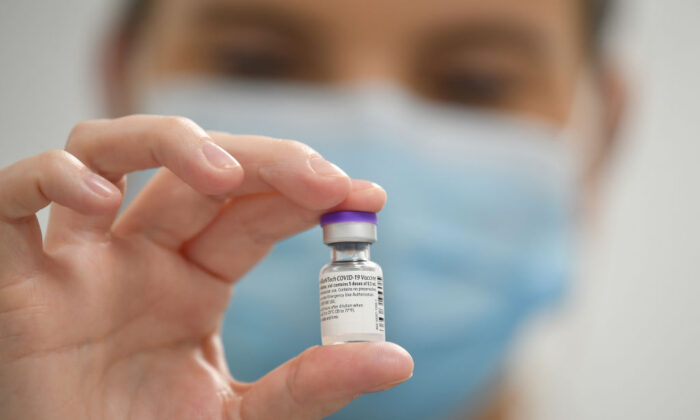 A member of staff poses with a phial of Pfizer-BioNTech Covid-19 vaccine at a vaccination health centre on the first day of the largest immunisation programme in the UK's history in Cardiff, United Kingdom on Dec. 8, 2020. (Justin Tallis/Getty Images)
Republicans

A Republican House lawmaker has introduced a proposal that would ban private businesses from requiring proof of COVID-19 vaccination for employees, describing such a demand as an affront to civil liberties.

“They’re not really providing a rational basis for discriminatory activity—they’re busy separating healthy people from other healthy people on the presumption that people without a vaccine are not healthy,” Rep. Warren Davidson (R-Ohio) said in an interview with Fox News in announcing the measure. “It’s a violation of civil liberties.”

At the state level, several GOP-led legislatures have passed bills barring governments’ use of a vaccine passport or a system that would mandate a person show some proof of vaccination against COVID-19 in order to enter a building.

His bill, which is called the Vaccine Passport Prevention Act, would prevent the “federal government from issuing any form of vaccine passport; ban states from doing the same as a condition of receiving federal funds; and bar businesses connected to interstate commerce from requiring ‘any patron or customer to provide any documentation certifying COVID-19 vaccination, or post-transmission recovery, as a condition” of service, according to the text of the measure.

Late last month, the federal Equal Employment Opportunity Commission (EEOC) announced that businesses can require that employees get a vaccine against COVID-19 without violating federal law. Later, the EEOC in updated guidance in June said employers have to make “reasonable accommodations” for workers who don’t—or can’t—be vaccinated due to disability, pregnancy, or religious beliefs.

A U.S. district judge in Houston earlier this month struck down a lawsuit filed by hospital employees over the company’s mandatory vaccination policy, ruling that the plaintiff, Jennifer Bridges, wasn’t being coerced by the firm into getting the COVID-19 shot as she “can freely choose to accept or refuse a COVID-19 vaccine; however, if she refuses, she will simply need to work somewhere else.”

But Davidson said that the idea that certain individuals can be banned from going into a business or facility due to their vaccination status is a key civil liberties issue.

“They were making the same arguments on civil rights in the ‘60s when they said, ‘Well, I don’t have to let anyone stop at my gas station or my hotel or my restaurant, or ride where they choose on the bus—it’s my bus,’” Davidson told Fox News. “And we said, ‘No, you have to have some reasonable public accommodation.’

“The idea that people can’t restore our way of life and reconnect with civil society unless they get a vaccine is an inherent violation of civil liberties.”