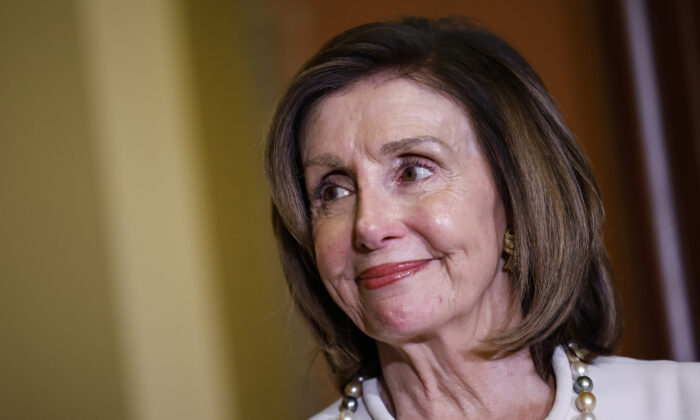 The U.S. House of Representatives passed a defense funding bill on Dec. 8 that would force the termination of the military’s COVID-19 vaccine mandate if it’s also approved by the Senate and signed by President Joe Biden.

“This is a great product. It’s good for our country’s national security. It’s helpful in Eastern Europe, but it is imperative, as we move to our concerns with China and INDOPACOM, that we pass this bill,” Rogers told colleagues this week, referring to the U.S. Indo-Pacific Command.

Key features of the 4,408-page bill, released this week, include the authorization of a 4.6 percent pay raise for military personnel, enabling officials to raise the basic housing allowance, creating a new entity called the Civilian Protection Center of Excellence that focuses on preventing harm to civilians, and authorizing a $138.9 billion investment in defense research and development, including a jump in funding for research at Historically Black Colleges and Universities.

Other provisions include enabling military officials to establish a pilot program that would “promote the safe storage of personally owned firearms,” as well as authorizing $11.5 billion for the Pacific Deterrence Initiative, authorizing $800 million for the Ukraine Security Assistance Initiative, requiring an inspector general report on aid granted to Ukraine, and extending a prohibition on military cooperation with Russia for five years.

The bill also states that the defense secretary must repeal the COVID-19 vaccine mandate within 30 days of its enactment.

Smith said on the House floor on Dec. 7 that the mandate, imposed in August 2021, was “the right policy” and that it “saved lives and improved readiness.”

But in 2022, a mandate that requires a primary series of the vaccine doesn’t make sense because those initial doses provide little to no protection months later, he said.

“Personally, I would have preferred the Department of Defense do it on their own rather than legislature telling them to but since they didn’t, I think this makes sense, and I think we ought to do it,” Smith said.

Defense Secretary Lloyd Austin has said that the mandate should remain in place for readiness purposes, even though the vaccines have performed much worse against newer variants of the virus. Biden will look at the final form of the legislation—the Senate could amend it—before deciding whether to veto it, according to the White House.

“There’s still the legislative process that has to move ahead on this. And so, again, I’m not going to get ahead of the vote, or I’m not going to get ahead of the president,” White House press secretary Karine Jean-Pierre told reporters in Washington just before the vote. “But every year, the NDAA has some provisions we support and some we do not. And what the President is going to do is he’s going to judge this piece of legislation, this bill, on its entirety when that occurs.”

Congress can override a veto with a two-thirds vote in each chamber.

A number of senators have already spoken out in support of the bill, including Sen. Jack Reed (D-R.I.), chairman of the Senate Armed Services Committee, and Sen. Jim Inhofe (R-Okla.), the top Republican on the panel.

Eleven Republican senators, including Sens. John Hoeven (R-N.D.) and Jim Risch (R-Idaho), celebrated the inclusion of the mandate termination, saying that the United States “needs a strong military to protect our country against the growing threats facing our nation.”

Members speaking on the floor said they supported the measure because it would bolster the military and it includes critical components such as authorizing the construction of 10 new naval vessels, prohibiting the retirement of the gravity bomb, and establishing a hypersonic initiative.

“This bipartisan legislation is a force for America’s national security and economic competitiveness,” House Speaker Nancy Pelosi (D-Calif.) said on the floor.

After the vote, a number of members cheered the development.

“Our country’s budget should reflect our priorities as a nation. I’m glad that this bill prioritizes people—giving them a deserved pay raise, lowering costs to better meet the childcare needs of our military families, improved health benefits for our Guard and Reservists, and expanding workforce development and job training for the future,” Rep. Andy Kim (D-N.J.) said in a statement.

“As we face growing aggression from adversaries like China, Russia and Iran, the need for a capable, modernized military is more important than ever,” Rep. Young Kim (R-Calif.) said. “Today’s NDAA helps us support our troops and protect our national security at home and abroad.”

Rep. Ashley Hinson (R-Iowa) said, “This legislation provides our troops with a pay raise, ensures we have the resources to take on China and Russia, and bolsters our national security.”