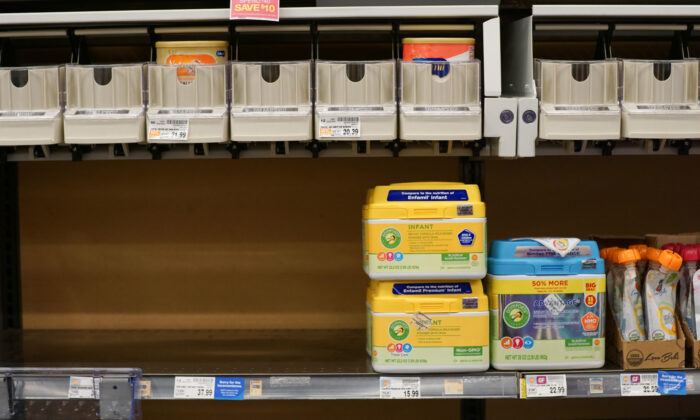 Baby formula is offered for sale at a local grocery store in Chicago on May 16, 2022. Baby formula has been in short supply in many stores across the country. (Cara Ding/The Epoch Times)
Policies & Impacts

The main legislation—H.R. 7790, the Infant Formula Supplemental Appropriations Act—seeks to provide the Food and Drug Administration (FDA) with $28 million in “salaries and expenses” for resolving current and future shortages of baby formula.

H.R. 7790 will also seek to prevent fraudulent products from entering the domestic market.

The legislation was sponsored by Rep. Rosa DeLauro (D-Conn.).

With a 231–192 vote mainly along party lines, HR 7790 passed the House following the invocation of the Defense Production Act by President Joe Biden.

Republicans objected to the legislation, with House Minority Whip Steve Scalise (R-La.) claiming that the Democrats’ proposal doesn’t resolve the issue. He said it simply throws “additional money at the FDA,” while failing to hold the organization accountable for the current shortages.

The crisis began when major formula producer Abbott Laboratories ceased operations at its Michigan plant after four children reportedly got sick with bacterial infections, resulting in two deaths. Abbott—the largest supplier of powder infant formula in the United States—has denied that their formula was the reason for the illnesses.

Abbott said on May 16 that after FDA approval, they could restart the Michigan plant within two weeks. From the time of the restart, it would take six to eight weeks before their product would be available on shelves, he said.

“Abbott will continue to import formula from FDA-registered facility in Ireland to help alleviate near-term supply shortage,” the company stated.

Other reasons for the shortage include global supply chain disruptions that have caused havoc with getting essential items to market shelves, a curbing of production, and the hoarding of baby formula during the pandemic.

Democrats say the FDA doesn’t have enough resources to inspect foreign manufacturers and supported the organization’s role in resuming safe production and ensuring a steady supply of baby formula.

“In the wealthiest nation in the world, babies should not be at risk of going hungry. Parents should not have to play a guessing game and wonder if the food that they are giving their babies is safe,” DeLauro said on the House floor.

“Their incompetence underscores the need for funding to come with guard rails and accountability for the FDA’s failures,” Hinson said.

The Access to Baby Formula Act (pdf), the other measure passed in the House, allows for families who participate in the Women, Infants, and Children (WIC) federal program to gain access to baby formula from additional manufacturers.

At present, Abbott supplies products to 89 percent of the more than 1 million infants covered under WIC, according to the office of Rep. Jahana Hayes, (D-Conn.), sponsor of the legislation.

The Access to Baby Formula Act also seeks to waive requirements that slow down the process to get baby formula back on shelves without sacrificing quality and safety standards.

The bill passed with a 414–9 bipartisan vote in the House and now heads to the Senate.