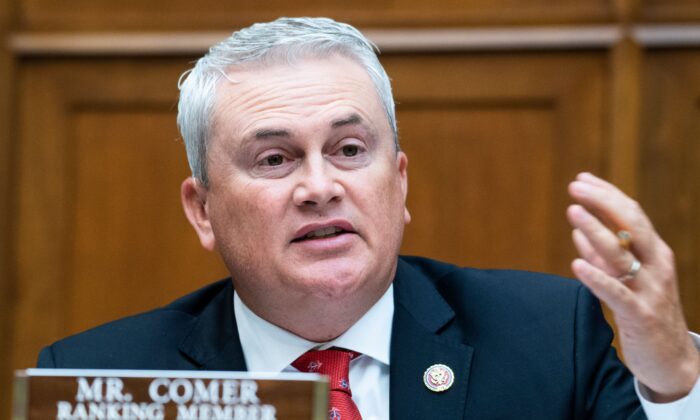 Rep. James Comer (R-Ky.), the likely incoming chairman of the House Committee on Oversight and Reform, announced on Dec. 4 a “broad probe into President [Joe] Biden’s energy crisis that is harming the pocketbooks of Americans,” with particular emphasis on the president’s “secret deal” with Saudi Arabia.

“Since Day One in office, President Biden has waged war on American-made energy and driven up costs for Americans. President Biden has unilaterally shut down the Keystone XL pipeline, implemented a moratorium on oil and gas production on federal lands, drained critical oil reserves, and pushed policies that directly resulted in skyrocketing energy prices,” Comer, who is currently the ranking Republican member of the oversight panel, said in a statement.

“With one-party Democrat rule in Washington, they’ve weaponized their unchecked power, waged a war against American-made energy production, and forced Green New Deal policies on the American people. Oversight Republicans have pushed senior Biden Administration officials for answers and will continue to seek their plans to reverse energy policies detrimental to the American people and our national security.

“With the power of the gavel, we will hold the Biden Administration responsible for recklessly attacking a critical industry that provides the American people affordable energy and good-paying job opportunities.”

As an indication of the comprehensive scope of Comer’s investigation, he made public letters from the Republican members of the oversight panel to Secretary of Energy Jennifer Granholm, Secretary of State Antony Blinken, Environmental Protection Agency Administrator Michael Regan, and Securities and Exchanges Commission (SEC) Chairman Gary Gensler.

In one of two letters to Granholm, the Republicans reminded the energy secretary about an Oct. 21, 2021, letter to her in which they “raised concerns that climbing energy prices were on track to strain American finances in the coming winter months.”

Having received no response from Granholm, Comer and his colleagues pointed out in their current letter that “the U.S. Energy Information Administration (EIA) predicts that consumers could spend as much as 51 percent more than they did last year to heat their homes from October 2022 through March 2023.”

“Households on the East Coast could pay 45 percent more than last year for heating oil, mainly due to the lack of pipelines that exclude the region from access to cheaper forms of energy,” they wrote.

“Additionally, regional stockpiles of diesel and heating oil are at their lowest levels in recorded history. Without sufficient energy stockpiles and proper infrastructure, energy prices will continue to soar.”

In their letter, the Republicans also noted Biden’s statement saying, “We’re gonna be shutting these [coal plants] down all across America and having wind and solar,” and that Biden shut down the Keystone XL pipeline, which would have delivered millions of barrels of oil daily to the United States from Canada and kept gasoline prices at the pump from spiraling out of control.

“The American people deserve to know the Administration’s plan—if there is a plan—for keeping energy costs low when the federal government is taking away the most available, affordable, and clean energy sources before winter,” Comer and the other Republicans told Granholm.

In their letter to Blinken, Comer and the oversight panel GOP members focused on a New York Times report on a “secret deal” negotiated by Amos Hochstein, the Biden administration’s special envoy and coordinator for international affairs at the State Department, and Brett McGuirk, a senior National Security Council official.

“Under the proposal, OPEC+ would first expedite oil production hikes by several months, and then the organization would announce additional production boosts beginning in September with the purpose of temporarily reducing fuel prices worldwide—all conveniently before the November elections,” according to the report.

As a result, Comer said, “the American people deserve transparency. This committee has a responsibility to uncover the facts surrounding any backdoor deals cut by President Biden or his emissaries. The President is choosing foreign sources over domestic sources—all for political purposes.

“If this Administration is engaging in backdoor market manipulations with adversarial nations while jeopardizing our national security for the sake of securing more favorable election conditions for Democrats, the American people have a right to know.”

The letter to Regan requested copies of “a staff-level briefing, documents, and information about a methane rule with burdensome compliance costs and a provision which encourages third parties to access private property.”

The letter to Gensler focused on a technical “glitch” that created problems with the SEC’s proposed Climate Disclosure Rule that “would impose burdensome and unnecessary requirements on businesses of all sizes, including disclosure requirements of direct and indirect carbon emissions of third-party entities.”