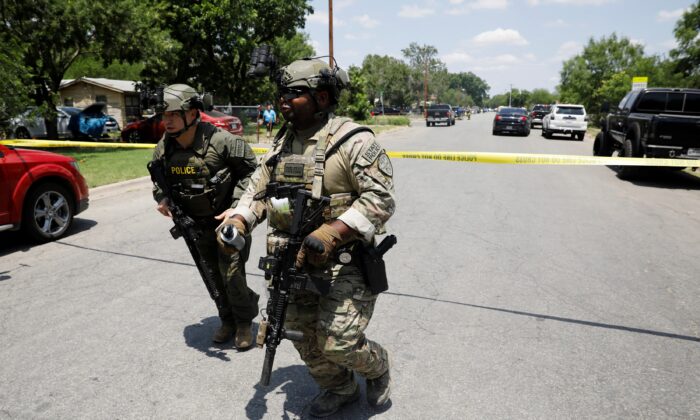 Law enforcement personnel guard the scene of a shooting at Robb Elementary School in Uvalde, Texas, on May 24, 2022. (Marco Bello/Reuters)
US News

Rep. Carolyn Maloney (D-N.Y.), chair of the House Oversight Committee, has opened an investigation into five U.S. gun manufacturers in the wake of the Texas school shooting.

Maloney sent letters Friday ahead of a hearing on gun violence on June 8 to Bushmaster Firearms (pdf), Daniel Defense (pdf), Sig Sauer (pdf), Smith and Wesson (pdf), and Ruger (pdf) asking for data on how they make, market, and sell semiautomatic rifles.

“Our country faces an epidemic of gun violence, which is now the leading cause of death for children in the United States,” Maloney wrote, tying guns made by the five companies to mass shootings of the last two decades.

The Democratic lawmaker from New York accused the manufacturers of “reaping a profit from the deaths of innocent Americans” by marketing their guns “to civilians.”

She asked the companies to reveal their “annual gross revenue and profit” from semiautomatic gun sales since 2012, how much they spend on marketing annually, and how many are sold annually to distributors, retailers, consumers, and government agencies.

Maloney said the Uvalde gunman who killed 19 children and two adults at Robb Elementary School on May 24 used a semiautomatic rifle made by Daniel Defense, which markets firearms on its website under the categories of sports use, personal defense use, and professional arms use.

The AR-15 style rifle used by the gunman in Uvalde was made by @DanielDefense.

The Las Vegas shooter was also found with four AR-15-style rifles from DD, including one outfitted with a bump stock and 100 round magazine.

Maloney accused the five gun manufacturers of “aggressively” marketing their products to the public despite “strong public support for an assault-weapon ban.”

“The Committee respects the rights of law-abiding Americans under the Second Amendment, but that does not excuse irresponsible corporate conduct that fuels deadly gun violence and endangers our children,” she wrote.

U.S. gunmaker Remington Arms settled a $73 million lawsuit by the parents of Sandy Hook victims in February. The company argued the shooter was responsible, not the manufacturer. It was the first time a gun manufacturer was held responsible for a shooting.

Some of the parents of the victims argued that if the company didn’t market their guns to young men, their children would still be alive. Remington had argued it was immune from claims because of the Lawful Commerce in Arms Act, but ultimately decided to settle to prevent the case from going to trial.

However, proponents of gun rights argue their constitutional right to bear arms without infringement, under the Second Amendment, is an important safeguard from the potential tyranny of government.

This view was recently supported by the world’s richest man, Telsa and SpaceX CEO Elon Musk, who said he “strongly” believed in the right.

“Historically, maintaining their power over the people is why those in power did not allow public ownership of guns,” Musk said in an email to CNBC on May 25.

Later, on Twitter, he further revealed his thoughts, advocating for “at minimum” a “special permit” to own “assault rifles.”

Tom Fitton, president of Judicial Watch, a nonprofit government watchdog, replied to Musk’s posts with what he thinks is the point at issue between gun control activists and those advocating for the right to bear arms.

Former President Donald Trump on Friday also spoke in support of gun rights, saying the “existence of evil” in the world made it important to arm law-abiding citizens.