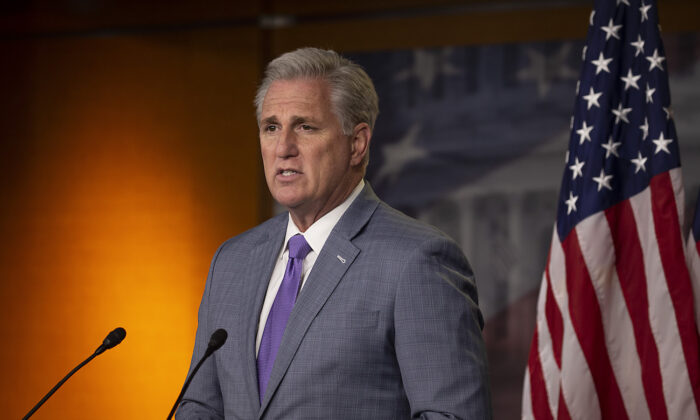 House Minority Leader Kevin McCarthy (R-Calif.) told reporters at a press briefing from the southern border on March 15 that doctors at the U.S.–Mexico border in Texas told him that 10 percent of illegal immigrants are testing positive for the CCP virus before being released into surrounding communities.

“When I talk to the doctor to see when they’re being tested for COVID, when they get out, more than 10 percent are testing positive,” McCarthy said. “Well, they’re being stored together. In a time when the president will keep our country closed, when maybe we have hope for a Fourth of July, to get together just with our family, how much spread of COVID is he creating every single day by his policies along this border?”

Trey Mendez, mayor of Brownsville, Texas, told reporters in a Zoom call on March 15 that 7.3 percent of illegal immigrants arriving in his city have tested positive for the CCP virus, also known as the novel coronavirus.

In addition, the Republican leader criticized the Biden administration’s immigration policies, particularly the reversal of Trump-era policies through executive orders.

“This is where [Biden] should talk to the border agents, and let them know that this is beyond a crisis,” McCarthy said. “He can continue to deny it, but the only way to solve it is to first admit what he has done, and if he will not reverse action, it’s going to take congressional action to do it.”

McCarthy said he sent a letter to President Joe Biden in hopes of meeting with him to discuss the crisis at the southern border, and specifically about the message his administration is sending migrants.

Opponents of Biden’s relaxed immigration policies say they’re fueling the surge of migrants at the border. In February, illegal crossings rose above 100,000, according to official data, with another 26,000 evading capture, according to provisional Customs and Border Protection figures reviewed by former Texas Department of Public Safety captain Jaeson Jones.

The Biden administration recently acknowledged, albeit reluctantly, that there’s a crisis at the border.

When pressed by reporters about why illegal immigrants aren’t required to have negative test results to enter the country like those who enter legally, White House press secretary Jen Psaki defended the administration’s policies and said more could be done with testing and quarantining them if the governor of Texas would authorize it.

“Governor Abbott has referred to what’s happening at the border as … an open borders policy. That is absolutely incorrect,” Psaki said on March 11 during a White House press briefing.

“The border’s not open. The vast majority of individuals apprehended or encountered at the border continue to be denied entry and are returned.

“The other piece is, as the question about the testing of migrants at the border, or testing of migrants as they’re coming across, and we have DHS, and FEMA has stepped in and worked with local mayors, NGOs, and public health officials in Texas to implement a system to provide COVID-19 testing, and as needed, isolation and quarantine for families released from border patrol facilities.

“Their proposal and agreement would cover 100 percent of the expense of the testing isolation and quarantine, but Governor Abbott has decided to reject that.”

“The Biden Administration continues to pressure Texas to assist them in aiding their illegal immigration program,” Eze said in a statement. “We are focused on doing our job—protecting Texans.”

Abbott, a Republican, said in a statement: “Border security is strictly a federal responsibility. The federal government alone has the responsibility to test, screen, and quarantine illegal immigrants crossing our border who may have COVID.

“Instead of doing their job, the Biden administration suggested it did not have the sufficient resources and, remarkably, asked Texas to assist them in aiding their illegal immigration program. Texas refused.”

He said in a CNBC interview on March 11, “The Biden administration has been releasing immigrants in south Texas that have been exposing Texans to COVID.”

According to a Just the News/Rasmussen poll released on March 15, 90 percent of Americans think illegal immigrants should be tested for the CCP virus before being released into the country.