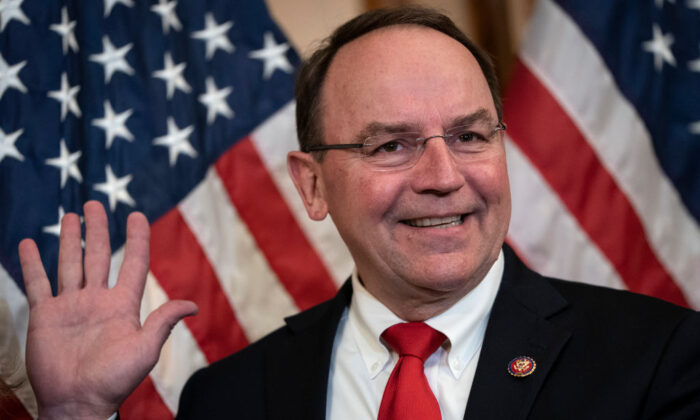 Rep. Tom Tiffany (R-Wis.) participates in a ceremonial swearing-in at the U.S. Capitol in Washington on May 19, 2020. (Drew Angerer/Getty Images)
US-China Relations

“For more than 40 years, American presidents of both political parties have repeated Beijing’s bogus lie that Taiwan is part of Communist China–despite the objective reality that it is not,” stated Tiffany, according to a March 1 press release from his office.

“Taiwan is a free, democratic, and independent country, and it’s time U.S. policy reflected that fact,” Tiffany added. “It is time to do away with this outdated policy.”

The TRA authorizes the United States to supply Taiwan with military equipment for the island’s self-defense. Moreover, the TRA calls for the setup of a nonprofit corporation called the American Institute in Taiwan, which is now the de-facto U.S. embassy on the island.

The United States has long held a “one-China policy,” which asserts that there is only one sovereign state with the name “China,” but it is different from the “one-China principle” under which the Chinese regime asserts sovereignty over Taiwan. The Taiwan government has also rejected China’s “one-China principle.”

China claims Taiwan as a part of its territory and has threatened to reunite the island with the mainland with military action. However, Taiwan is a de-facto independent nation with its own democratic government, constitution, and military.

“As an independent nation that proudly collaborates with Taiwan across a wide spectrum of issues, it’s long past time the United States exercised our sovereign right to state what the world knows to be true: Taiwan is an independent country, and has been for over 70 years,” stated Perry according to the press release.

The bill also proposes that the U.S. government should initiate formal negotiations with Taiwan for a bilateral free-trade agreement.

Finally, the U.S. President and other U.S. officials should “advocate for Taiwan’s full membership in the United Nations and other international organizations in which the United States is a member,” according to the language of the bill.

Taiwan is currently not a member of the World Health Organization because of objections by Beijing.

The bill is a concurrent resolution that lacks the force of law. It also does not require the signature of the U.S. President to be enacted.

On Tuesday, Joanne Ou, spokeswoman of Taiwan’s Ministry of Foreign Affairs, thanked the two U.S. lawmakers in a daily briefing. She added that the ministry will continue to follow the development of the bill.