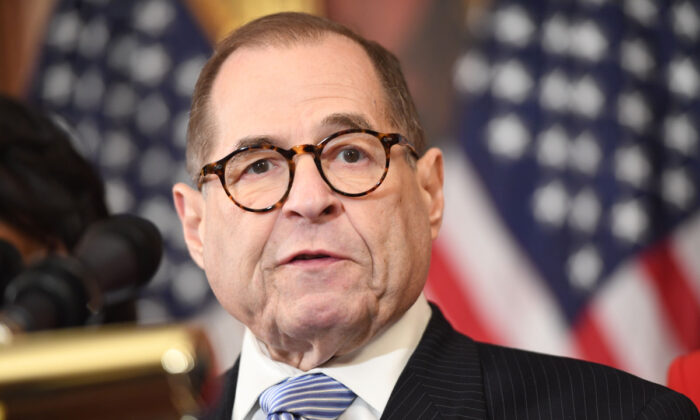 House Judiciary Chairman Jerry Nadler (D-N.Y.) speaks to announce articles of impeachment for President Donald Trump during a press conference at the Capitol in Washington on Dec. 10, 2019. (Saul Loeb/AFP via Getty Images)
US

The House Judiciary Committee has advanced legislation to provide federal law enforcement with an influx of resources to counter domestic terrorism, with Democrats voting down several attempts by Republicans to insert safeguards into the bill.

The committee—of 25 Democrats and 19 Republicans—approved the bill on April 6 with a 21–17 vote along party lines. The Domestic Terrorism Prevention Act now heads to the House floor after three days of contentious debate.

Republicans made four unsuccessful attempts to amend the legislation.

The first attempt was an April 5 proposed amendment to prevent the Department of Justice (DOJ) from monitoring parents who protest school board policies. Republicans introduced that in response to Attorney General Merrick Garland’s decision last year to open a federal investigation into violence at school board meetings.

Judiciary Committee Chairman Jerry Nadler (D-N.Y.) opposed the amendment, scoffing at the notion that the DOJ is spying on protesting parents as being a “Fox News conspiracy theory.”

However, ranking GOP committee member Jim Jordan (R-Ohio) cited documents from an FBI whistleblower who revealed last November that the bureau was indeed tracking all investigations and “assessments” of threats of violence against educators. Reps. Nancy Mace (R-S.C.) and Jamie Raskin (D-Md.) have warned that FBI “assessments” entail “intrusive investigative techniques” that can be initiated without a factual predicate of criminal wrongdoing.

Raskin also opposed the amendment, even after co-authoring a March 7 letter calling for an audit into the FBI’s use of assessments.

“Does anyone really believe this is going on?” Raskin said, downplaying the notion that the FBI may be surveilling protesting parents.

Republicans then proposed another amendment on April 5 that would have the FBI simply provide Congress with the number of protesting parents it’s tracking as possible threats. Democrats voted this proposal down 23–17 with similar reasons given.

Another Republican attempt to add an amendment related to the legislation’s concentration on “white supremacists” and “neo-Nazis.” While the bill references those terms throughout, Rep. Greg Steube (R-Fla.) sought to also insert Antifa, Black Lives Matter, and other “radicalized social justice groups” as intended targets of the legislation.

This time, Rep. Matt Gaetz (R-Fla.) spoke against the amendment along with the Democrats.

“I am not going to support the amendment, because the biggest problem we face is the inward turning of these national security organizations,” Gaetz said.

“I do not believe we should do this to our fellow Americans, whether they’re members of Antifa, BLM, or some other group that’s deemed a thought crime or a crime of bad politics in today’s ethic.”

Steube said he understands Gaetz’s concerns, but that the reason he proposed the amendment was to expose the partisan politics being played by Democrats, he said.

The amendment was defeated in a vote of 23–15, with Gaetz joining the Democrats in opposition.

Finally, Republicans proposed an amendment that would prevent the federal government from using counterterrorism resources against anyone who refuses a COVID-19 vaccine.

The Republicans noted that the threat against people who decline the vaccine being treated as domestic terrorists is far from hypothetical. They pointed to a February bulletin from the Department of Homeland Security (DHS) that declared a heightened terrorism threat because of “false and misleading narratives,” misinformation, and “conspiracy theories.”

Rep. Thomas Massie (R-Ky.) noted that he has been accused of spreading COVID-19 misinformation numerous times since the pandemic began. That prompted Rep. Dan Bishop (R-N.C.) to jokingly quip to Massie, “You’re definitely a domestic terrorist.”

Massie laughed, but stressed the seriousness of the matter.

“It should terrify you that this amendment is germane to the bill,” Massie said.

Democrats still opposed the proposal, arguing that the counterterrorism resources will only be used for legitimate law enforcement purposes. After a lengthy debate on April 5, the committee markup resumed on April 6 and the vaccination amendment was defeated 19–16.